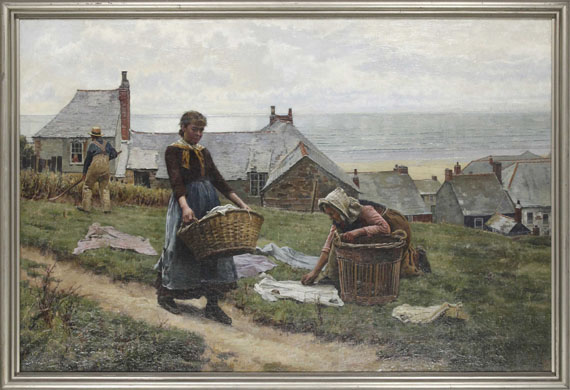 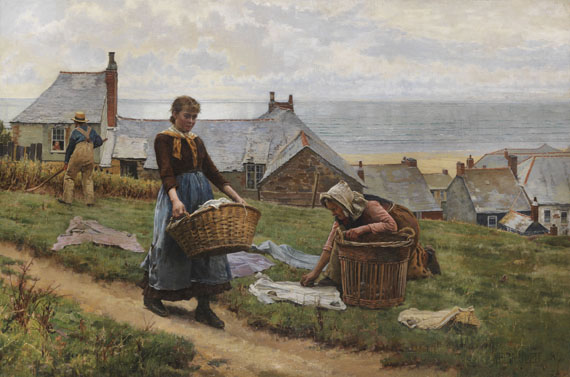 In 1884 William Henry Bartlett arrived in the picturesque Cornish fishing village of St Ives and immediately set to work. Visiting the small pier constructed by the Georgian engineer, John Smeaton, and the nearby Porthmeor beach, Bartlett observed the activities of villagers who fished for sand eels while awaiting the shoals of pilchards that descended from the north. These were accompanied by scenes of recreational activity – such as the swimming competitions held in the harbour.
A Londoner, Bartlett was the son of an art dealer. Before his twentieth birthday he travelled to Paris where he registered at the Atelier Julian, eventually transferring to the École des Beaux Arts. Following a sketching tour of the Tyrol, he over-wintered in Munich, working from the life figure at the Academy, where he observed the powerful tendency to idealise the model – Zufälligkeit – that prevailed in Germany. However, it was Un atelier de peinture dans le repos (unlocated), an impressive interior of Julian’s new studio in the rue d’Uzès, that brought his first success at the Salon in 1880. Like many artists of his generation, he went on to practice the type of plein air Naturalism that drew its inspiration from the work of Bastien-Lepage. The French painter advised each of his followers to discover their own coin de terre and during the following years Bartlett painted in the west of Ireland and at Venice before arriving on the hilltop at St Ives.
Here, as the present canvas indicates, Bartlett did not neglect women’s work. As elsewhere in Europe, washing was often laid on the grass or on hedgerows to dry when the weather was calm. As the women fill their baskets, an elderly fisherman, using an oar, hoes his vegetable patch, under the watchful eye of a woman in the upper window of a nearby cottage. It is an cloudy day on the Cornish coast when color and tone provide a rich harmony.
[Prof. Kenneth McConkey]
More Information
+
Sell
Get a free appraisal for a similar object!
+
Register for
William Henry Bartlett
+
Buying from A-Z
+
Contact a specialist
Share