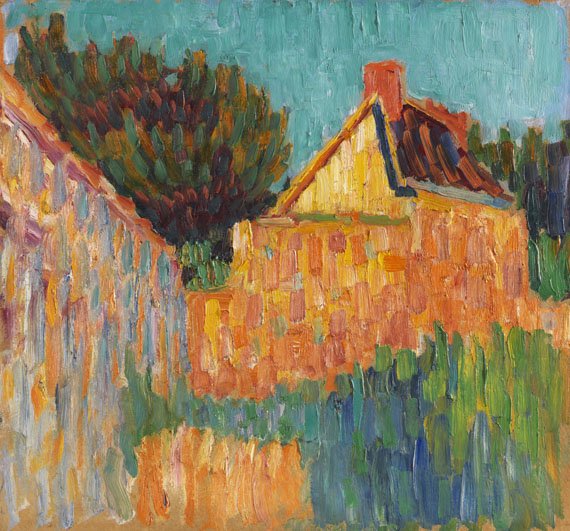 enlarge image
+
306
Alexej von Jawlensky
Kleines Haus vor Buschwerk (Französische Landschaft), 1906.
Oil on cardboard, laminated on sturdy board
Estimate:
€ 140,000 / $ 168,000
Sold:
€ 212,500 / $ 255.000
(incl. 25% surcharge)
Lot description
Kleines Haus vor Buschwerk (Französische Landschaft). 1906.
Oil on cardboard, laminated on sturdy board.
Jawlesnky/Pieroni-Jawlensky/Jawlensky 169. Verso inscribed with a hand-written confirmation by Adreas Jawlensky, the artist's son, from 1957: "Ich bestätige hiermit / dass das Bild "Kleines Haus vor / Buschwerk" / ein Original meines Vaters / A. Jawlensky 1906 ist / Andreas Jawlensky / 11.II.1957 / Basel". 50 x 53 cm (19.6 x 20.8 in). [JS].
The work "Kleines Haus mit Buschwerk" originally used to be on the reverse side of the painting "Parkweg" (Jawlensky/Pieroni-Jawlensky/Jawlensky 2266), which was also sold through Galerie Beyerle, Basel. The cardboard with both works on it was skillfully separated before 1957. In context of the Jawlensky exhibition at Beyerle in 1957, Andreas Jawlensky inscribed "Kleine Haus vor Buschwerk" - as well as other works on display there - with a confirmation of authenticity. [JS].
• Jawlensky creates visual presence with every single brushstroke of the pastose application of the paint.
• One of the rare early French landscapes which are particularly fascinating for their airy pointillist flow and their expressive colors.
• The occupation with the Impressionists and the Fauves in France unleashed Jawlensky's colorist mastery.
• On display in early Jawlensky shows at Kunsthalle Bern (1957) and Kunsthalle Mannheim (1958).
• Similar works can be found at, among others, the Pinakothek der
Moderne, Munich, and the Folkwang Museum, Essen.

LITERATURE: Clemens Weiler, Alexej Jawlensky, Cologne 1959, cat. no. 518, with illu. on p. 262.
"Back then it was the first time that I understood to paint what I felt and not what I saw [..] And I understood to render nature in colors according to my glowing soul. I made a lot of landscapes, as well as shrubs and Breton heads from my window. The colors were fiery. And my soul was satisfied.“
Alexej von Jawlensky, quote from: Alexej von Jawlensky, Reisen, Freunde, Wandlungen, ex. cat. Dortmund 1998, p. 42

Essay
In the spring of 1906 Alexej von Jawlensky and Marianne von Werefkin, Helene Nesnakomoff and her son Andreas embarked on an extensive tour of France. The reason for this trip was a visit to the Salon d’Automne in Paris, where Jawlensky would submit ten paintings made during that trip for the grand exhibition 'Exposition de l'art russe' under the direction of the art critic and curator Sergei Djaghilev. The travel route of Jawlensky and his entourage is only fragmentarily handed down: it began in Brittany in spring with a longer stay at the seaside resort of Caranteque, followed by a stay in Paris for the opening of the salon in October, a subsequent journey to Sausset-Les Pins in southern France on the Mediterranean Sea with a detour to Arles to look for traces of his great models van Gogh and Gauguin, and ended with a visit to Ferdinand Hodler in Geneva in January 1907.
On the trail of his models
With ardent admiration Jawlensky traveled to the places where his role models had worked in hope of discovering perhaps an overlooked work of the master, but also to soak up the atmosphere of the places and the regions. It also seemed important to him to deepen his knowledge of the latest French tendencies in painting, especially the work of van Gogh and also Gauguin – who was honored with a grand commemorative at the salon. The knowledge of the painting of the 'Fauves' - Matisse, Derain and Vlaminck - who caused a stir with their first presentation at the Salon d'Automne in Paris in 1905, also changed his palette at the end of his trip to Provence in autumn / winter 1906. Jawlensky sent six pictures to the Salon in 1905 - mostly still lifes - but he himself was neither in Paris nor in France at all. A year later Brittany was the first stop on the itinerary, it is the artistic home of Gauguin and his successors, the Nabis. It can be assumed that Jawlensky and Werefkin also visited Pont-Aven and Le Pouldu in the south of the peninsula, where Gauguin lived for some time. In any case, the Atlantic landscape had a lasting effect on Jawlensky: “For the first time I knew how to paint not what I see but what I feel [..] And I knew how to translate nature into colors according to my glowing soul . I painted a lot of landscapes there,painted bushes and Breton heads from my window . The pictures were glowing in color. And I felt truly happy deep inside back then.” the artist recalls in his memoirs. (quote from: Alexej von Jawlensky, Reisen, Freunde, Wandlungen, ex. cat. Dortmund 1998, p. 42)
A combination of contrasting tones
The landscape of Brittany had a lasting impression on Jawlensky and stimulated him to work intensively. Against this background, one can assume that Jawlensky discovered the motif "Kleines Haus vor Buschwerk" (Small House in front of Bushes) in 1906 in the vicinity of the seaside resort of Caranteque, rendering it with mentioned 'glowing' colors. Still completely absorbed by the stylistic peculiarities of a Van Gogh, Jawlensky placed one brushstroke next to the other in bright colors, literally building the long brick wall along the path, behind which the two-story house, surrounded by tall, sweeping bushes ducks. A simple, rural scene, a minor thing of nature in radiant midday light, which the artist transforms into a wonderful view, doing without further details and thus increasing the expressive effect of the colors for the viewer: orange and blue, red and green, pink and purple. Jawlensky breaks away from local colors and uses them in an autonomous pictorial landscape as a vehicle for inner expression. Colors that now interpret the impression of a landscape, organize it and make it a true experience.

Van Gogh in his own hands
Two years later Jawlensky found what he had looking for at the modern art trader Brakl & Thannhauser in Munich. With great financial effort and the help of Johanna van Gogh-Bonger he acquired the much longed-for van Gogh: the painting “Street in Auvers” with the “House of Père Pilon” from 1890. In a letter dated March 28, 1908, he thanked the artist's sister-in-law: “Dear Madam! Yesterday I did the business part of my purchase with Mr. Brakl. Today I want to express my heartfelt joy in owning the work that is so dear to me, and I want to express my heartfelt thanks to you, Madam, for helping me to acquire this property through your gracious courtesy. Van Gogh has been a teacher and a role model to me. As a person and an artist, he is near and dear to me. To own something made by his hand has been my ardent wish for years. I was looking for his works in Paris and Arles .. ”(quote from Walter Feilchenfeldt, Vincent van Gogh and Paul Cassirer, Zwolle 1988, p. 67). (MvL)
More Information
+
Sell
Would you like to sell a similar object?
+
Register for
Alexej von Jawlensky
+
Buying from A-Z
+
Contact a specialist
+
Alexej von Jawlensky Biography
Share 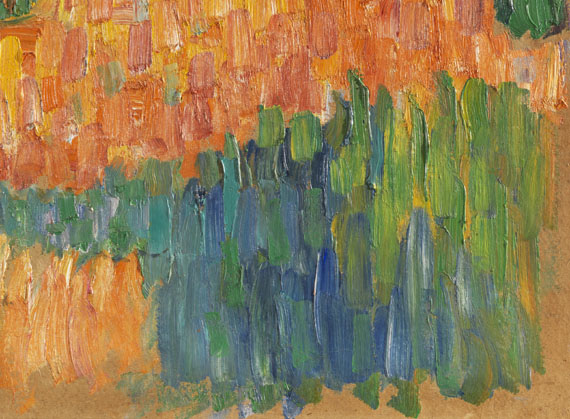 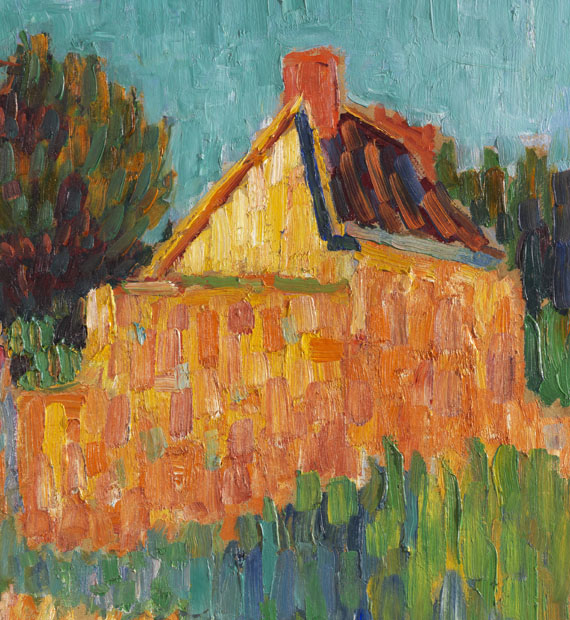 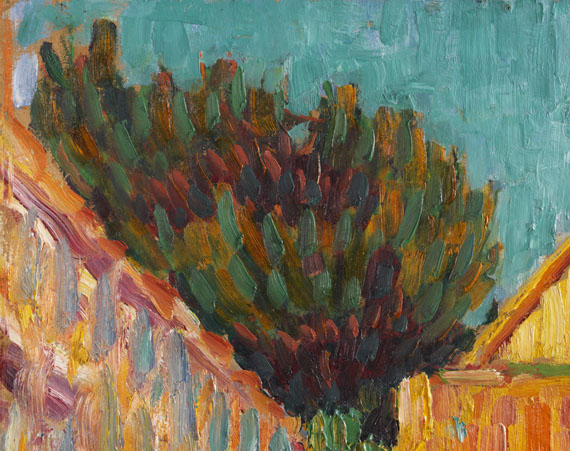