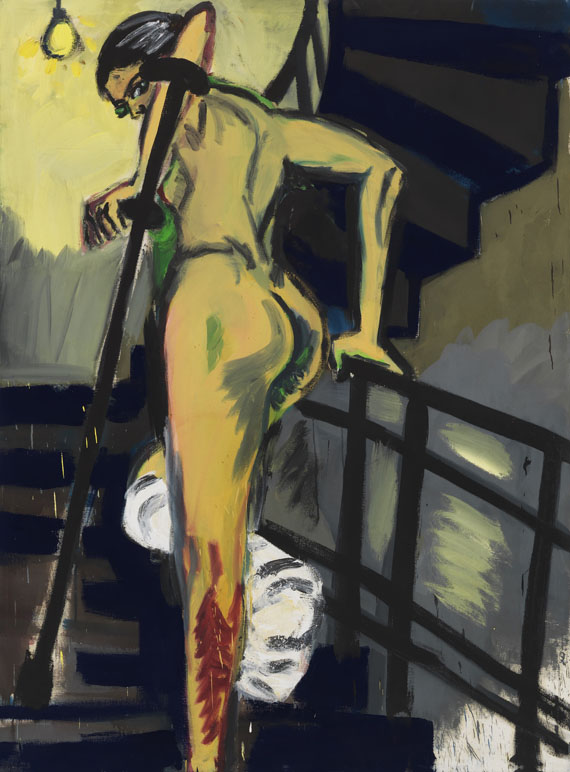 • Remarkable document of the revolutionary Berlin art scene in the early 1980s.
• Fetting was one of the protagonists of the "Neue Wilde".
• Fetting's works were part of the exhibition "BERLINART" at the Museum of Modern Art, New York, and the San Francisco Museum of Modern Art in 1987/88.
• International exhibition history.
• Other works from the 1980s are in possession of, among others, the Tate Gallery, London, the Städel Museums, Frankfurt am Main, and the Pinakothek der Moderne, Munich.

LITERATURE: Alexander Borovskij, Rainer Fetting und Zeitgenossen. Deutscher Neoexpressionismus, New York 1995, cat. no. 30 (with illu.).
Christie's, London, auction on July 1, 2008, lot 435 (with illu.).
Cf. Fetting, Cologne 2009, p. 148-149.
"I met Susanne at Kippenberger's music venue SO36 and was really impressed by her. She lived in an industrial loft just around the corner [..] and studied art with Walter Stöhrer. I invited her to the Exil for food and drink many times, and then, we both were a little drunk, we decided to paint one another. [..] Susanne was on the synthesizer in the famous all female New Wave band >Malaria<. One day she had a leg in a casket after she had fallen off the stage during a show, I had the idea for 'Susanne auf Wendeltreppe'. I walked up the spiral staircase every day to get to my studio. I guess I wanted to reference Marcel Duchamp's Nude Descending a Staircase, of which Gerhard Richter had also made his own interpretation."
Rainer Fetting, quote from: Fetting, Cologne 2009, p. 148.

While he was still a master student at the Berlin University of the Arts, Rainer Fetting founded the ‘Galerie am Moritzplatz’ together with artist friends in West Berlin in 1977. The “artist self-help project” of the Kreuzberg “Moritzboys” became the nucleus of the “Neue Wilde”, whose motifs and stylistically violent representational painting style disturbed the art scene of that time, since figurative painting was regarded as outdated while abstract painting and minimal art were trending. The explosive, colorful painting of the "Neue Wilde" was a loud opposition to the still predominant, abstract-reduced formal language. They got their name from the French Fauves, who had also caused great outrage in the established art scene with their impulsive painting in Paris at the beginning of the 20th century. The loud and oppositional Berlin painters collective received first international recognition with the exhibition "BERLINART" at the Museum of Modern Art, New York, and the San Francisco Museum of Modern Art in 1987/88. Fetting, as well as Martin Kippenberger, were integral parts of the West Berlin club scene. The legendary "SO36" and the Kreuzberg "Exil" soon became the most prominent spots of this artistic subculture. Here Fetting also met the punk musician and artist Susanne Kuhnke. Fascinated by her personality, he made several paintings of her in 1980/81. For Fetting, "Wendeltreppe Gelb (Susanne)" is both a very personal picture and an overwhelming painterly testimony to the extremely unconventional Berlin art scene of the 1980s, not only in terms of color and size. [JS]
More Information
+
Sell
Get a free appraisal for a similar object!
+
Register for
Rainer Fetting
+
Buying from A-Z
+
Contact a specialist
+
Rainer Fetting Biography
Share