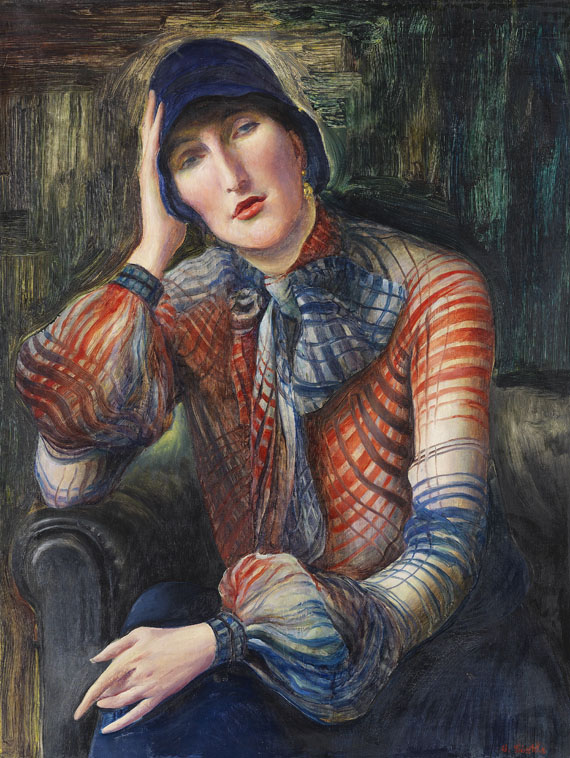 enlarge image
+
155
Albert Birkle
Damenbildnis – Elisabeth Starosta mit Chiffon-Bluse und Hut, 1925-1930.
Oil on canvas
Estimate:
€ 20,000 / $ 24,000
Sold:
€ 25,000 / $ 30.000
(incl. 25% surcharge)
Lot description
Damenbildnis – Elisabeth Starosta mit Chiffon-Bluse und Hut. 1925-1930.
Oil on canvas.
Lower right belatedly signed and inscribed, presumably by a hand other than that of the artist. 82 x 62 cm (32.2 x 24.4 in).
One of two versions of the painting which Birkle made of his young fiancé wearing a chiffon blouse and a hat (cf. version from 1923, Ketterer Kunst, auction 406, lot 68).
• One of the rare depictions of the artist's wife, the craftswoman Else Starosta.
• Marvelous depiction of the paradox interplay of intimacy and distance typical of a still young love.
• The line's clarity and the person's reverie show clear notions of New Objectivity.
• Birkle's dissecting painting of the Weimar days is one of the most spectacular rediscoveries on the art market.

We are grateful to Roswita and Victor Pontzen, Archive Albert Birkle, Salzburg, for their kind expert advice. The work is registered in the in-house catalog raisonné with the number "139".