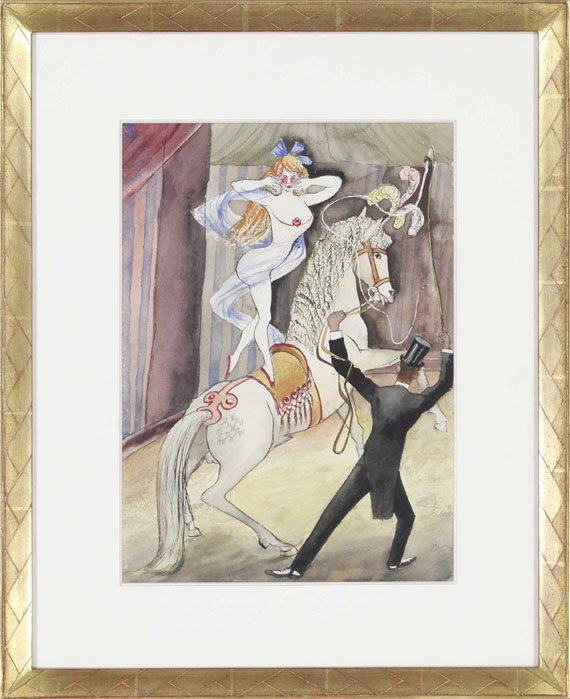 • Outstanding example of the artist's fascination for the seemingly carefree circus world after the atrocities of World War I.
• Part of the exhibition "Magic Realism. Art in Weimar Germany" at Tate Modern, London, in 2018/19 .
• Just like Kafka addressed the ambivalence of the artist's existence and human existence in his parable "Auf der Galerie" (1919), Dix uses the grotesque exaggerated circus rider for the same purpose in this work.
• Large-size, pictorially executed composition, which has a famous precursor in the painting "Le Cirque" (Musée d’Orsay, Paris) by the French pointillist Georges Seurat.
• A similar, however less detailled watercolor is part of the collection of the Dix Foundation, Vaduz (Pfäffle A 1923/21).

In the years around 1923 Otto Dix was intensively occupied with circus and cabaret motifs. In the years after the First World War, circus and cabaret shows were welcome distractions for a society still scarred by the horrors of war I and the Spanish flu that had been raging in Europe. Max Beckmann also examined these themes at the same time, and created his famous "Jahrmarkt" portfolio with ten etchings in 1921. For Beckmann fair, circus and theater were carefree parallel worlds and metaphors for life. On December 12, 1940 – during World War II - Beckmann noted in his diary: "If you can do all of this - the whole war or even considering life only as a scene in the theater of infinity, many things are easier to endure. " Otto Dix was also marked by the atrocities of the First World War, which he had experienced in four years of military service, during which he saw heaps of corpses and got to know the acrid smell of fear and death. Otto Dix devoted himself to the subject of war more intensely than almost any other German artist, he left behind drawings, graphics and paintings with terrifying images of this human horror. It is necessary to take this context into account when looking at our "Zirkusszene" staged with an almost grotesque exaggeration. For Dix the circus motif also had the potential of a surreal parallel world offering an escape from the fears and traumas of real life just a few years after the end of the war. Thus the "circus scene" is anchor point and metaphor of life at the same time, despite all the glamour and the lightness of the performance, the circus rider in the ring is a figure driven by the circus director’s whip - a figure painfully caught in its role. Considering the ambivalence of the motif of a slightly agonized circus rider - appearing cheerful only at a first glance - it appears very likely that Dix was familiar with Franz Kafka's parable "Auf der Galerie" from 1919, in which a deplorable and sick circus rider is driven to deliver a top performance for an indefatigable audience by her whip-wielding merciless ringmaster over months. Both Kafka and Dix do not only examine the question of appearance and reality of the artist's existence, but also address the shallowness and ambivalence of human existence as a whole. As it can be assumed for Kafka, too, it is also very likely that Dix was familiar with the famous painting "Le Cirque" (Musee d'Orsay, Paris) by the French pointillist Georges Seurat, which in 1891 took up the motif of circus life in Paris in classic ornamental fin-de-siècle grandeur. [JS]
More Information
+
Sell
Get a free appraisal for a similar object!
+
Register for
Otto Dix
+
Buying from A-Z
+
Contact a specialist
+
Otto Dix Biography
Share