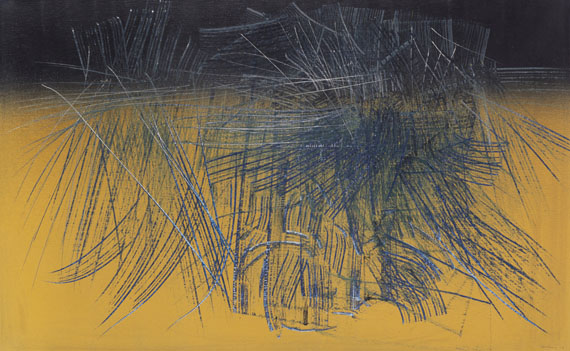 • Early large-size work.
• During this period of the "scratches" in the 1960s Hartung developed a tendency towards large sprinkled surfaces.
• With its bright toxic yellow Hartung realizes a tremendously atmospheric and cosmic tension.
• Hartung believes in the expressiveness of the line, which he scratches into the ground color's self-contained form with a hard and boisterous gesture.

The work is registered at the archive of the Fondation Hans Hartung et Anna-Eva Bergman and will be included into the forthcoming catalog raisonné.

"I like to act on the canvas. [.] It means scratching, tearing, staining and drowning the canvas in colors. In short, doing everything that is not "painting"." (Hans Hartung)

Essay
“In my youth (between 1928 and 1958) I had made several etchings, more followed in 1953. This technique, scratching on copper and zinc, is really perfect for me and even twenty or thirty years later my tendency to do this remains noticeable in my paintings, especially in works made between 1961 and 1965, when I worked a lot with different tools in the fresh applied, mostly dark colors, ”says Hans Hartung (quoted from: Hans Hartung. Autoportrait, 1976, p. ***). "During this period of 'scratching'", Hartung says elsewhere, "the tendency towards large, splashed surfaces slowly developed. At that time, my work was the result of two clashing techniques, with the help of which I obtained shapes and characters, I had discovered a method for spraying the paint on the canvas - first with the help of an inverted vacuum cleaner and later with compressed air - and I used these two techniques at the same time [.]. For a series of large pictures from between 1962 and 1967, in which the sprayed brown mass covered almost the entire surface, I consciously used this technique.” Or he created, as it is the case here, an unbelievably atmospheric and cosmic tension with a toxic glowing yellow. Hartung reduces the pictorial space to a minimum: An extraordinary hue with which the artist creates an organic composition that is yet characterized by constructive clarity. Hartung relies on the expressiveness of the line, which he scratches into the self-contained form of the color ground with a violent, almost stormy gesture, thus creating an appearance of a surrealistic automatism. It is an abstract figurative gesture that also suggests Hartung's ever-present engagement with informal sculpture. In the obvious concentration on the form, this gesture no longer seems purely playful, no longer as a combination of random signs, but as a conscious setting that puts the color space in a closed, three-dimensional state, full of energy and radiation. [MvL]
More Information
+
Sell
Would you like to sell a similar object?
+
Register for
Hans Hartung
+
Preview & Auction Procedure
+
Buying from A-Z
+
Catalogue Order
+
Contact a specialist
+
Hans Hartung Biography
Share 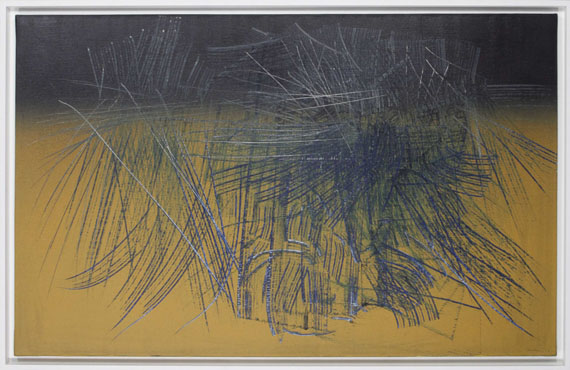 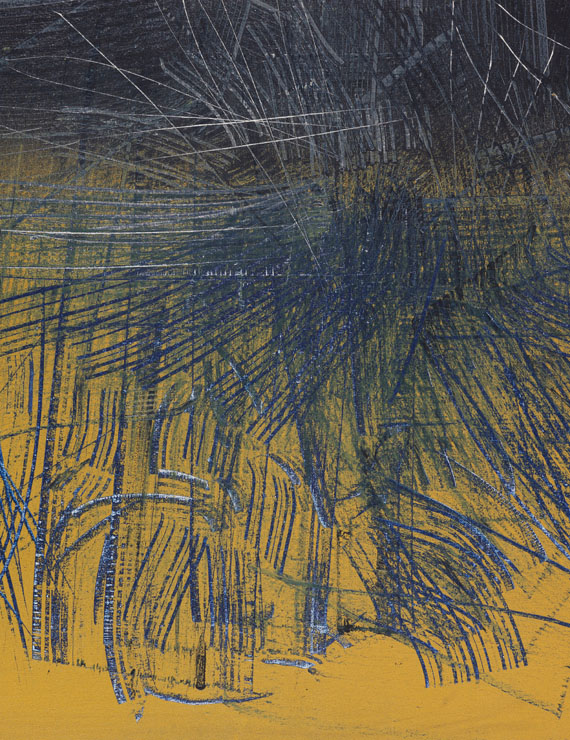 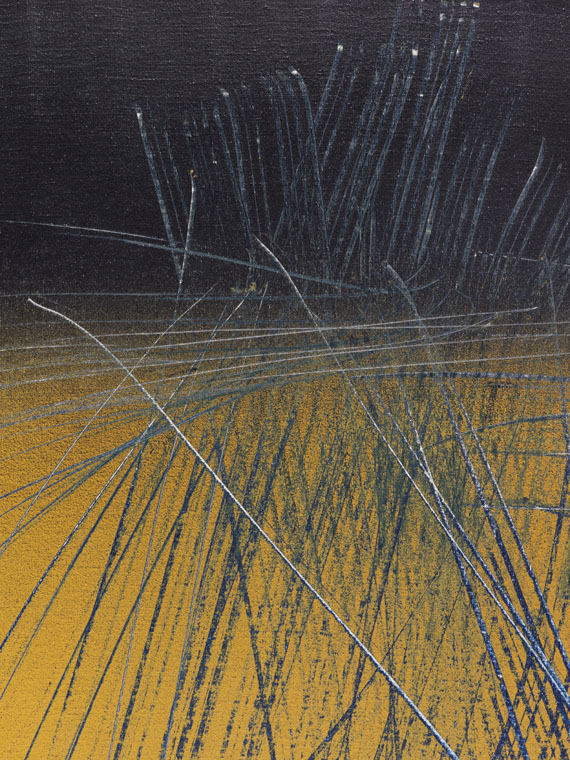