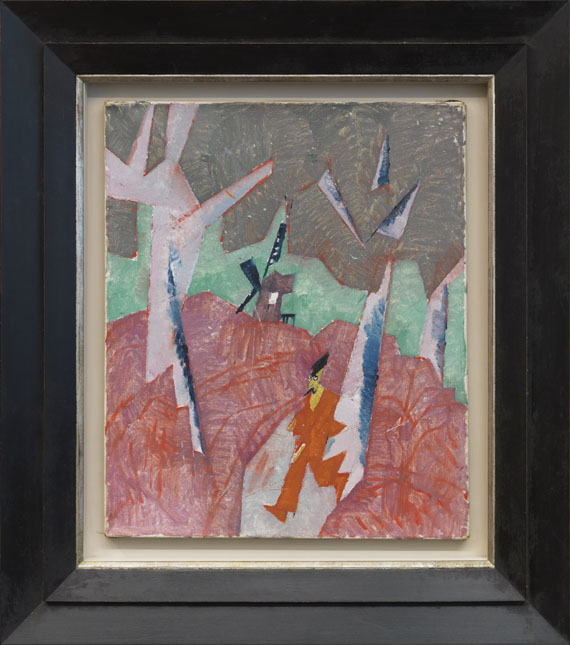 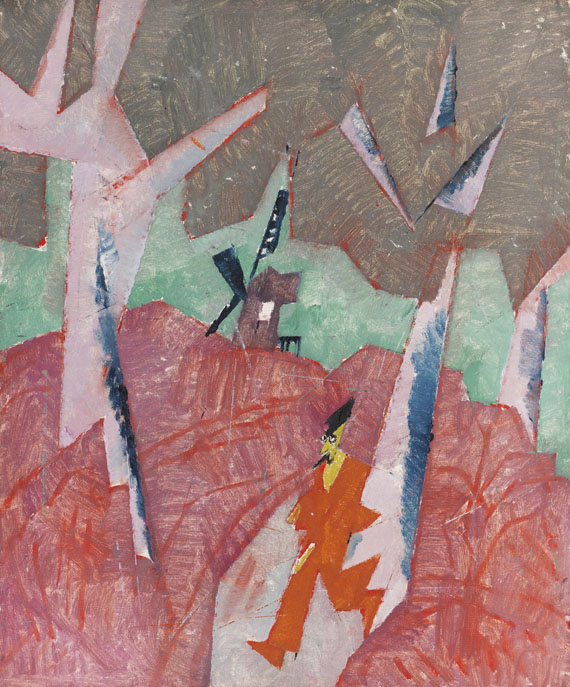 • Particularly eventful history.
• In 1937 Feininger had to leave the work behind, it was safekept and hidden from the Nazis by Hermann Klumpp.
• Following lengthy negotiations, also on state level, the work returned to the ownership of the Feininger family in the mid 1980s and adorned the dining room of T. Lux Feininger.
• Lux Feininger always admired the picture.
• This is one of the artist's popular caricature-like Cubist figure compositions from the time before the Bauhaus.

The path from illustrator to painter

After having successfully worked as an illustrator for magazines in Berlin and Paris for fifteen years, Feininger turned to painting in 1907 at the age of 36. His first painting was "Der weiße Mann" (The White Man), a composition based one of his caricatures executed in oil. "But my career has been very strange: I worked as illustrator for almost 15 years, out of necessity, and despite the fact that I had to torment myself to some extent to satisfy the demands of the publishers, I got a pretty good "reputation", that was like so 6-8 years ago. Then liberation , suddenly came! A contact with Chicago that enabled me to move to Paris and finally get to know the world of art. (Feininger in a letter to Kubin 1912, quote from: Ulrich Luckhardt / Matthias Mühling, Lyonel Feininger - Menschenbilder. Eine unbekannte Welt, ex. cat. Hamburger Kunsthalle, 2003, p. 134). In July 1906 Feininger moved to Paris, where he stayed until 1908, and rented a studio at 242 Boulevard Raspail. Fascinated by the atmosphere and the people, Feininger created a series of works depicting the elegantly dressed bourgeoisie, but also eccentric-looking figures that one could meet on the streets of Paris. In his sketches he made studies of different types of people strolling the Paris streets. These studies are the basic material of his early figure compositions. With the new medium of oil painting, he was able to take greater compositional risks by using striking tonal contrasts and daring color combinations, similar to the Fauves. But Feininger never completely gave up his bond with drawing, and increasingly emphasized its importance in his oil paintings over the next few years. The influence of the illustration is unmistakable in “Der junge Mann aus dem Dorfe” (The Young Man from the Village). The figure with its dynamic step and elongated facial features resembles a caricature, these type of figures, which more look like figurines, became quite typical of Feiniger's early style.
Prismaism

As early as in 1907 Feininger demanded that what is seen in art must be "internally reshaped and crystallized" (letter from August 29, 1907, quote from: Hans Hess, Lyonel Feininger, 1959, p. 42) In May 1911 Feiniger exhibited at the Salon des Indépendants together with the Cubists Braque and Picasso. Nevertheless, one cannot simply assign Feininger to the Cubists. He developed his very own formal language, which he himself referred to as ‘Prismaismus’. The artist broke the motif up into simple geometric and prismatic shapes. His world seems to be divided into nothing but triangular shapes, yet the wholeness of the representation is preserved. The two-dimensional decomposition of the image motifs determines the composition of “Der junge Mann aus dem Dorfe”, even the first sharp crystalline forms, which become Feiniger's trademark, can already be found here. The choice of a strong color palette and strong tonal contrasts are documents of Feininger's roots in illustration. A background that gave him a creative advantage when it came to depicting three-dimensional effects in his painting, because he knew quite well how to convey spatial depth without having to rely on color gradations or excessive details. In addition to the dynamics of the form, there is the tonality of the color. Accordingly, there are more moving forces that work together and provide manifold possibilities. The interplay of colors creates a lively, vibrating impression that is not static but flowing. In a letter to Julia from the summer of 1916, Feininger expressed himself euphorically: “Today was as good day, a happy working day, just like in it used to be in my happiest days. I am now in balance, finally […] and I have found the color. (Quote from Peter Nisbet, Lyonel Feininger's Green Bridge, in: Ex. cat., Lyonel Feininger. Menschenbilder, Eine unbekannte Welt, 2003, p. 30).
The Feininger case

Due to the growing political pressure in Germany, Lyonel and Julia Feininger felt compelled to emigrate to the USA in 1937. Feininger had already established contacts during previous teaching stays in America, so he could follow the call to Mills College. They left many of their belongings behind in Germany, including some works of art. Feininger handed over an extensive number of works to his friend Hermann Klumpp, whom he had met at the Bauhaus in Dessau. Klumpp studied architecture at the Bauhaus from 1929 to 1932. He kept the works in Quedlinburg and hid them from the Nazis who defamed Lyonel Feininger's works as ‘degenerate’ in 1937. The safekeeping of a large part of Feininger's oeuvre by Hermann Klumpp evolved into a legal dispute that lasted until the mid-1980s. The legal question that needed clarification was about the rightful ownership of the works of art. As protector and custodian Dr. Klumpp saw himself as the moral owner of the works. After Julia Feininger's death in 1970 the estate administrator investigated into the whereabouts of the works in Germany on behalf of the estate. Initially, the works were confiscated in 1972 and handed over to the Ministry of Culture of the German Democratic Republic for safekeeping. They were brought to the Nationalgalerie in Berlin under police protection. The legal dispute was ended after it had passed through several levels of jurisdiction and most of the paintings were granted to the sons of Lyonel and Julia Feininger. But the process was only about the clarification of ownership, whereas the actual restitution would take another couple of years. By that point the GDR had classified the paintings as a cultural asset worthwhile protecting and thus must remain in the country. After they had been granted to the Feininger heirs, the pictures were foreign assets and were subject to the Office for the Legal Protection of Property of the GDR, which was responsible for identifying unsolved property issues between the GDR and other states. This led to a political and diplomatic quarrell between the young socialist republic and the powerful United States. Ultimately, it was agreed that three paintings would remain in the GDR while some 49 paintings - including "Der junge Mann aus dem Dorfe" would be restituted in the spring of 1984. Having arrived in America, the works were exhibited in New York and Washington. Afterwards “Der junge Mann aus dem Dorfe” adorned the dining room of T. Lux Feininger for some 25 years. [SM]
More Information
+
Sell
Get a free appraisal for a similar object!
+
Register for
Lyonel Feininger
+
Buying from A-Z
+
Contact a specialist
+
Lyonel Feininger Biography
Share