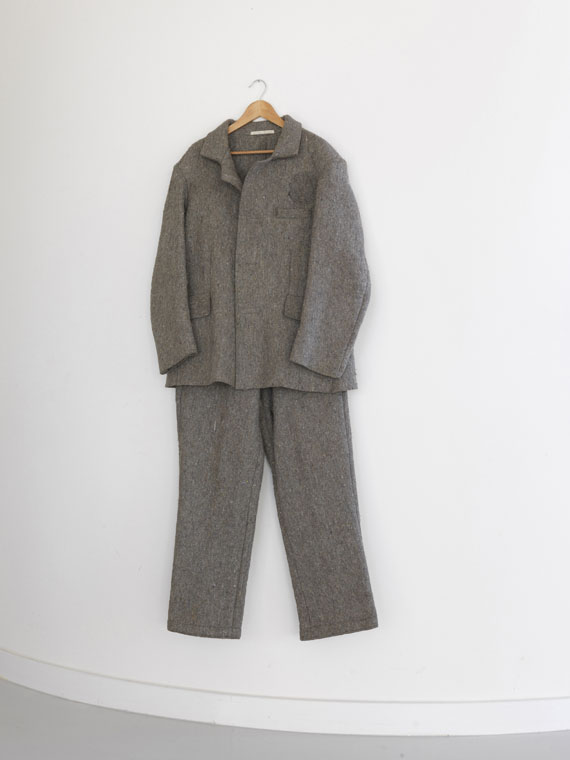 enlarge image
+
418
Joseph Beuys
Filzanzug, 1978.
Felt
Estimate:
€ 30,000 / $ 34,800
Sold:
€ 42,500 / $ 49.300
(incl. 25% surcharge)
Filzanzug. 1978.
Felt.
Cf. Schellmann 26. Signed on the inside pocket. From an edition of 60 copies. Ca. 170 x 60 cm (66.9 x 23.6 in).
This copy is from an edition of 60 copies worm by the carnival group "Alti Richtig" in a parade in 1978, addressing the acquisition of Beuys' environment "Feuerstätte" by the Basler Kunstmuseum. For this action Joseph Beuys provided a felt suit from the original edition from 1970 and also took part in the parade. Beuys used many of the suits worn back then for his new work "Feuerstätte II", which he donated to the Basler Kunstmuseum. The idea for the theme of the carnival parade came from the then young architects Jacques Herzog and Pierre de Meuron. [EH].
• Today other suits worn in the parade are part of the work "Feuerstätte II" by Joseph Beuys at the Kunstmuseum Basel.
• Felt isolates heat and sound, offers protection and prevents communication.
• The felt suit is another felt sculpture that Joseph Beuys created for his actions.

"I actually meant a completely different kind of heat, I meant a spiritual one or a beginning of an evolution."
Joseph Beuys, quote from: Schellmann, Joseph Beuys: Die Multiples, Munich 1992, p. 19.

"The felt suit is not just a gag, but an extension of my felt sculptures, which I also made in actions. Here, the felt also acts as a warming element or insulator. In all categories of heat sculptures it is used for this purpose, mostly in connection with fat. So there is a connection with the warming character." (Joseph Beuys, quote from: Jörg Schellmann, Joseph Beuys. Die Multiples, Munich 1992, p. 16)
More Information
+
Sell
Get a free appraisal for a similar object!
+
Register for
Joseph Beuys
+
Buying from A-Z
+
Contact a specialist
+
Joseph Beuys Biography
Share