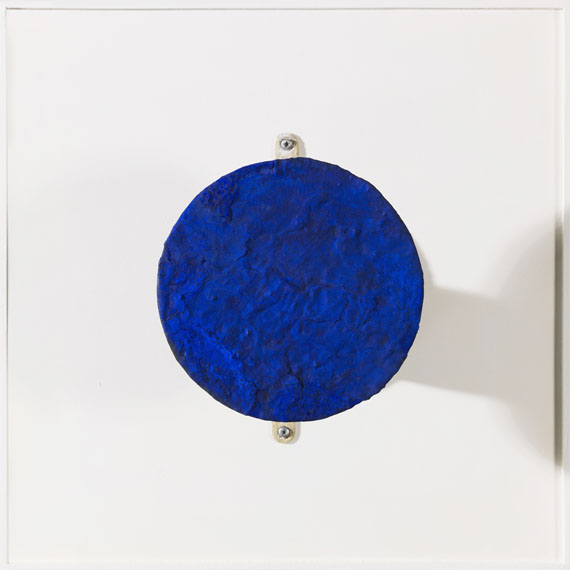 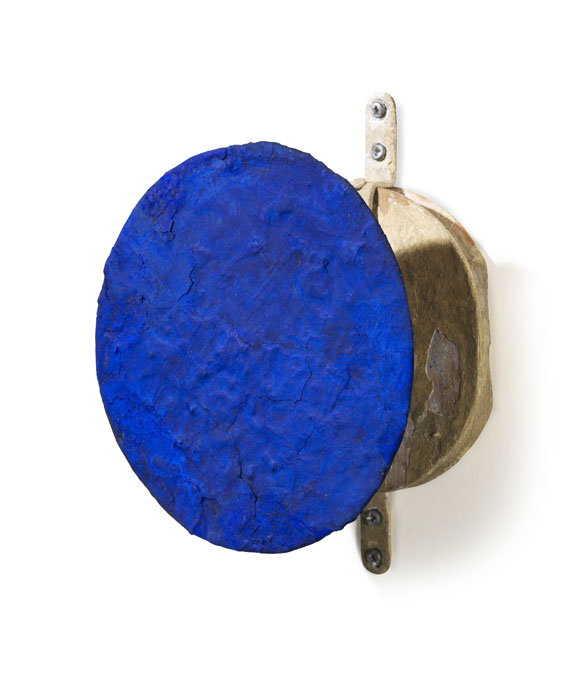 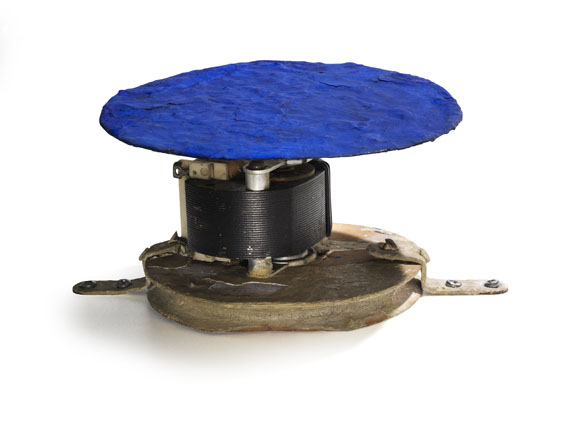 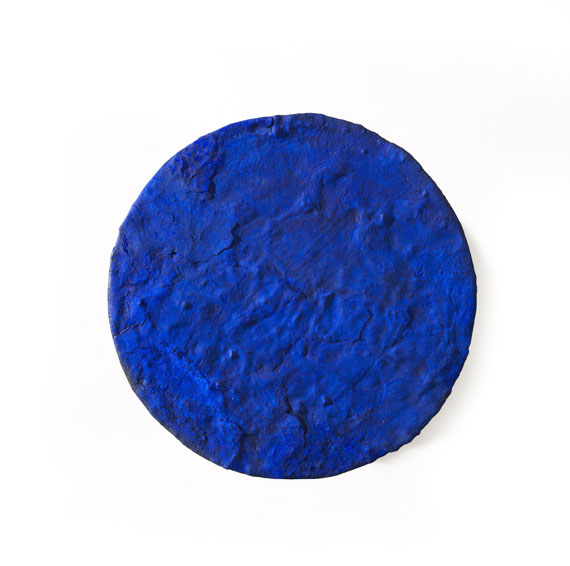 • Iconic combination of Yves Klein's monochrome immaterial color "International Klein Blue" and Jean Tinguely's kinetic-mechanic object art.
• The work was made in the late 1950s in context of an intensive cooperation of the two artists for the interior design of the Gelsenkirchen Theater.
• This is the first time that a joint work is offered on the international auction market (source: artprice u. artnet).
• Privately-owned since it was made.

In 1955 Yves Klein and Jean Tinguely - today icons of European post-war art - met for the very first time. Jean Tinguely was represented with one of his works in the exhibition of the Salon des Réalités Nouvelles, while Yves Klein's then radical, monochrome work "Expression du Monde de la Couleur Mine Orange" was not accepted, as it did not meet the requirement that it had to be in at least one other color. But Klein had long since made up his mind: In monochrome, pure color, he had discovered absolute freedom for art, so from that point on he devoted himself entirely to monochrome painting. He called himself "Yves Le Monochrome" and titled his journal "L’aventure monochrome". In 1957 Klein showed his deep ultramarine blue for the first time in the solo exhibition "Proposte monochrome, epoca blu" (Monochrome proposals, blue epoch) at Galleria Apollinaire in Milan, which would soon becomehis and which he even had patented as I.K.B. - International Klein Blue - in 1960. In February 1958, the gallery Iris Clert in Paris organized another significant solo exhibition. Their collaboration would be repeated only a little later in the major project of the new music theater in Gelsenkirchen. Together with Iris Clert, the theater’s architect Werner Ruhnau, Jean Tinguely, Norbert Kricke and other artists, Klein was commissioned with the design of the theater and created several monochrome-blue wall reliefs - probably the most monumental examples of his monochrome art. It was only during this intensive collaboration in Gelsenkirchen that Yves Klein and Jean Tinguely got to know and appreciate each other. The beginning of a fruitful collaboration and a beautiful friendship.
Jean Tinguely began his artistic career around the same time as his just slightly younger artist colleague. In Paris he showed wire sculptures, motorized wooden reliefs and the first "metamechanical sculptures": hand-made, filigree, partly painted machines that produce abstract drawings from lines and points with the help of a metal arm driven by a motor and equipped with different painting tools. With wit and lighthearted poetry, Tinguely not only questions the artist's authorship, but also the role of the viewer and the status of the work of art itself. Today his delicate metal constructions from between 1954 and 1960 are considered Tinguely's outstanding early works today. What monochrome painting meant to Yves Klein at this time, motion meant to Jean Tinguely. In his manifesto "Für Statik" (Düsseldorf,1959) he wrote: "Everything moves, there is no stagnancy. Don't let dated concepts of time dominate you. Away with hours, seconds and minutes. Stop resisting change. [.] Resist the attacks of weakness to stop what is already moving," (Quote from: Ex. cat. Jean Tinguely. Super Meta Maxi, Düsseldorf 2016, p. 54).
These two very different conceptions of art converged from 1958 on in joint works like the one offered here, painted in the patented pigment I.K.B. (International Klein Blue) and with a monochrome blue turntable that Jean Tinguely sets in motion with the help of a custom-made electric motor. In the year of its creation several products of their cooperation were shown in the highly acclaimed exhibition "Vitesse pure et stabilité monochrome par Yves Klein et Tinguely" at the renowned Parisian gallery Iris Clert. In precisely these efforts to integrate monochrome painting and motion into art, the artistic work of Yves Klein and Jean Tinguely of these days showed clear similarities to the work of the German ZERO artists, and Klein and Tinguely were actually part of the lively, progressive Düsseldorf art scene. They were in very productive exchange with Heinz Mack and Otto Piene. In 1964, both Tinguely and Klein, as well as the ZERO artists around Günther Uecker, Heinz Mack and Otto Piene were represented at documenta III. [CH]
More Information
+
Sell
Get a free appraisal for a similar object!
+
Register for
Yves Klein
+
Buying from A-Z
+
Contact a specialist
Share