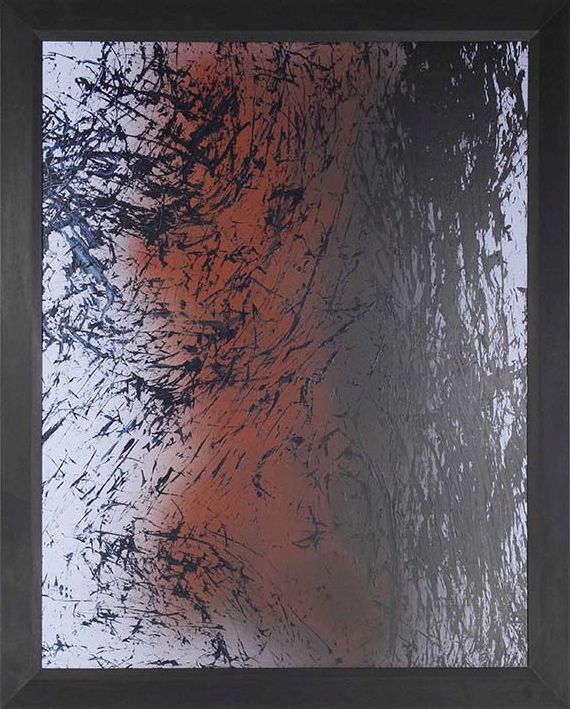 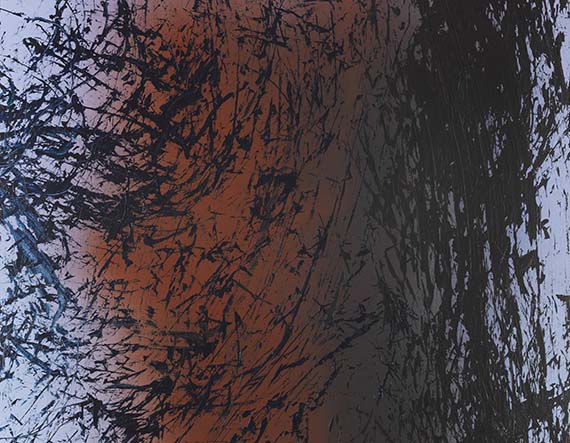 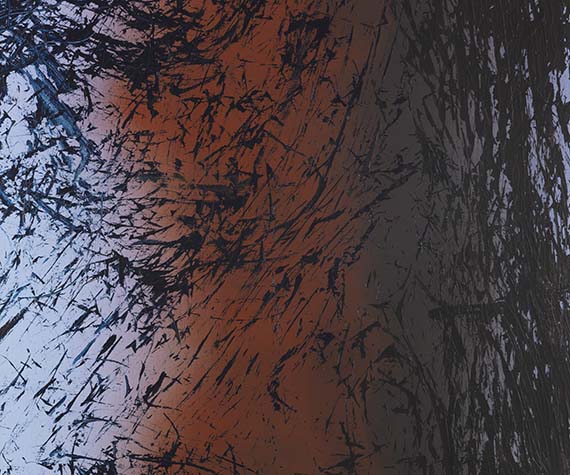 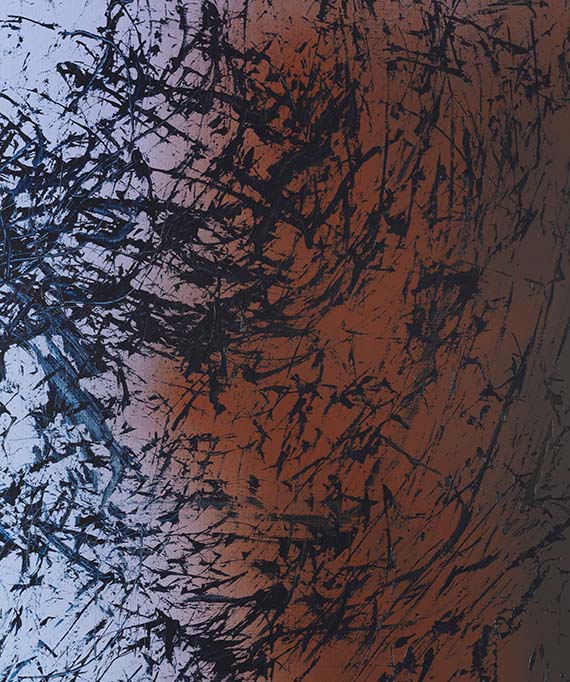 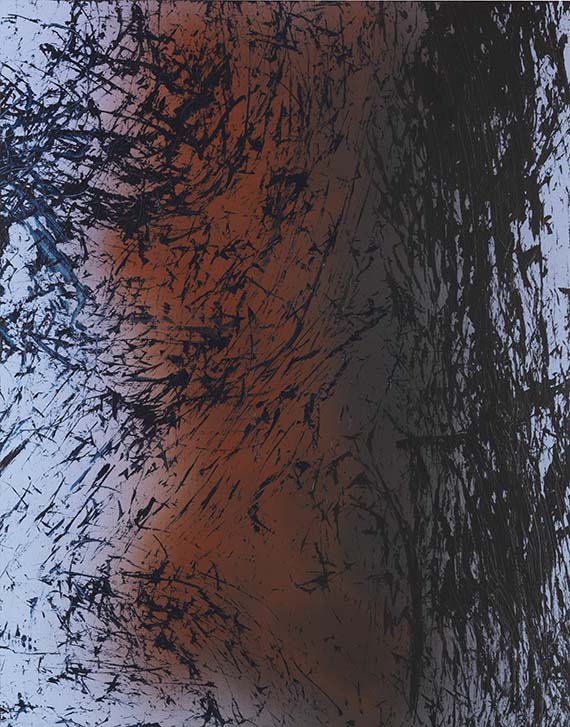 • The Metropolitan Museum of Art, New York, dedicated a solo show to the European protagonist of abstract painting as early as in 1975.
• Hartung whips the paint onto the canvas with an olive twig - a characteristic trait of works from this year.
• Energetic composition, which, owing to Hartung's dynamic and uncontrolled gesture, is a document of the artist's closeness to American Action Painting.
• One of the rare paintings from this series that has a glowing red at its center.
• Based on his informal creation, Hartung attained an experimental and highly dynamic application of the paint.

The work is registered at the Fondation Hans Hartung et Anna-Eva Bergman, Antibes, and will be included into the forthcoming catalog raisonné.

Hans Hartung, the Franco-German master of Informalism, had a decisive influence on abstract painting with an painterly oeuvre that covers nearly an entire century. The artist, who was born in Leipzig, made his first abstarct works in the 1920s and eventually left behind an extremely multi-faceted oeuvre with a distinctive and highly recognizable artistic signature when he died in 1989. While he became the defining figure of European Informalism with his compositions from around the middle of the century, his later works show an increasingly freer approach to the painterly gesture. Like this work offered here, they are the products of a liberated application of the paint, which became increasingly experimental in terms of the use of painterly means and which, in its grand gesture, bears traits of American Action Painting. In the 1970s Hartung employed rubber rollers, spatulas, brushes, rollers and brooms. With these devices he achieved astonishing effects, which through their increased gestural dynamics did not in any way suggest that Hartung was physically impaired by the war-related loss of his right leg. In addition to large brushes, Hartung later also used large brush brooms made of olive branches, with which he literally whipped the paint onto the canvas and reworked the color streaks. In his studio in Antibes Hartung left behind a large set of tools and equipment that underlines his impulsive act of creation and testify to Hartung's incessant joy in experimentation- like it is the case with the work offered here, a masterful composition dynamized through the use of the broom of olive branches. We can discover exciting parallels when we compare the fine black line structure that slightly spreads out and gently moves in front of the glowing background with Hartung's photographic work of this time, in which he seems to be on the threshold of painting, consistently putting focus on capturing abstract structures. From an airplane Hartung shot photos of cloud fields, water surfaces and mountain formations, and also records the fine linear structures of fishing nets or the streaks that aircrafts left on the tarmac. In a photo from 1976 Hartung documented the fine branches of an olive tree and its equally fine and light play of shadows on a wall near his studio in Antibes. Comparing this photo with the airy, fine composition of "T1980-E43", we immediately see how fundamental Hartung's photographic visual experience must have been for his extraordinary painterly work. [JS]
More Information
+
Bidding Options
+
Bid by telephon / written
+
Contact a specialist
+
Buying from A-Z
+
Preview & Auction Procedure
+
Catalogue Order
+
Register for
Hans Hartung
+
Hans Hartung Biography
+
Sell
Get a free appraisal for a similar object!
Share 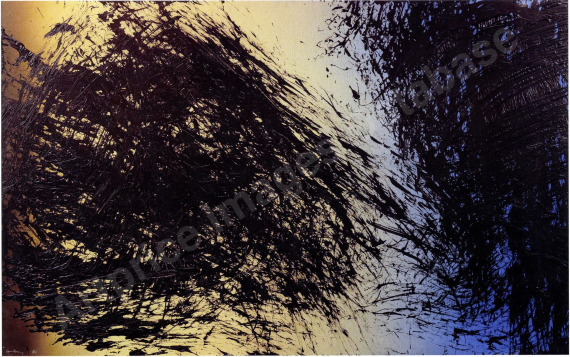 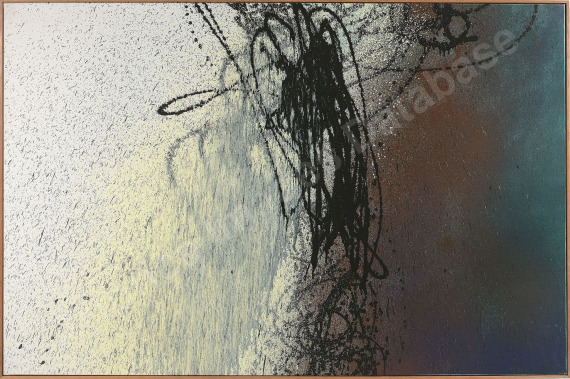 Resale right apportionment:
In accordance with §26 of German Copyright Act, a droit de suite charge of 2.4% including VAT is levied for original artworks and photographs for the compensation of the statutory right of resale.
Hans Hartung - lots sold by Ketterer Kunst
+
all