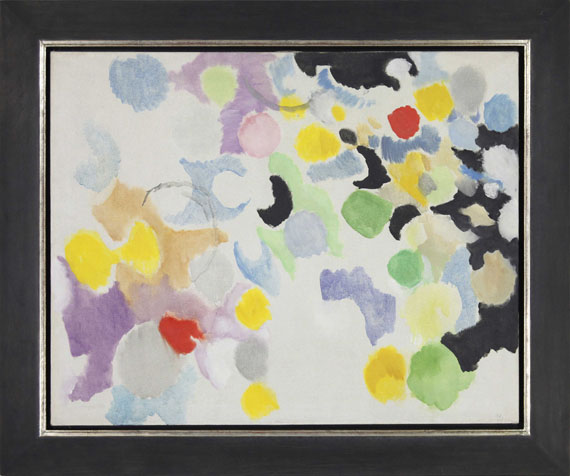 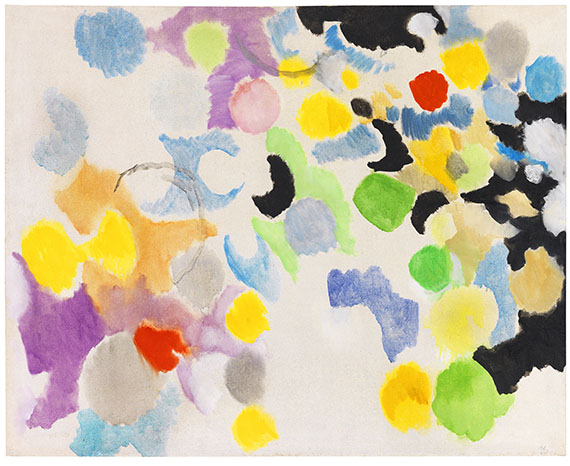 • "Scheibenbild" (Disc Picture) that Nay created in bright colors and an airy flow at the apex of the work series.
• Light, almost floating composition in which Nay tranfers the airiness characteristic of his watercolors onto the canvas with great mastery.
• The palette in Nay's "Scheibenbilder" ranges from almost white to almost black hues and also reveals Nay's closeness to music, as many of his titles suggest.
• Works by Nay were shown in an exhibtion at the Museum of Modern Art, New York, as early as in 1957.
• Works from the series "Scheibenbilder" are in many renowned museums, among them the Solomon R. Guggenheim Museum, New York (1961), the Sprengel Museum, Hanover (1958), the Nationalgalerie Berlin (1957) and the Städel Museum, Frankfurt a. M (1961).

LITERATURE: Sotheby’s, London, Contemporary Art, Part I, June 28, 1995, lot 6 (with illu.).
"In the classic days of the discs these entities float on the firmament of painting. [..] In the beginning the color flits through the image space with watercoloresque airiness; it barely touches the canvas [..]. In the classic years of the discs the closeness Nay's painting had to music, which the titles he chose also suggest, became evident and visualized the crossing of the media's frontiers."
Siegfried Gohr, Ernst Wilhelm Nay, Der Beteiligte - Unbeteiligte, in: Retrospektive. Ernst Wilhelm Nay, Museum Ludwig, Cologne 1990, pp. 9-11.

The title "Helle Akzente" aptly describes the positive mood that finds its painterly expression in the wonderfully light and luminous composition. Ernst Wilhem Nay is considered a master of abstract painting, making major contributions to its development since the 1950s at the latest by banning any figurative elements from his compositions. His early participation in the exhibition "German Art of the Twentieth Century" at the Museum of Modern Art, New York (1957) showed that Nay soon became an internationally recognized protagonist of German post-war modernism. It was exactly at this time that "Helle Akzente" was created as part of the series of the "Scheibenbilder" (Disc Pictures). The most famous works in the artist's oeuvre come from this series of works which also serves as basis for the later series of the "Augenbilder" (Augenbilder) and the "Späte Bilder" (Late Pictures). Initially Nay combined the round, flat disc shape with linear, graphic elements, before declaring it the sole protagonist of his compositions from 1955/56 on. From today's perspective they are regarded as the classic works of this period. Nay himself described his way to the legendary compositions of the "Scheibenbilder" with the following words: “So I started with very simple new experiments and realized: When I put a brush on the canvas it leaves a small blob, if I enlarge that blob I have a disc. Of course, this disc already does a lot to the surface. If I add more discs the result is a system of colored and quantitative proportions that can now be combined and assembled into larger picture complexes." (Magdalene Claesges, EW Nay. Lesebuch, Sebstzeugnisse und Schriften, Cologne 2002, p. 226.). The color spectrum in which Nay finally developed his disc images is vast. From light, translucent creations such as "Helle Akzente", over white and light gray compositions like "Diamant" (1957) up to primarily black disc pictures like "Dunkler Klang" (1956, Museum Ludwig, Cologne) or "Grauzug" (1960, Museum moderner kunst, Vienna). "Helle Akzente" is one of the rare light compositions developed from a luminous, translucent application of paint, which, in addition to the airy, light color accentuation, actively incorporates the white background into the composition and testifies to Nay's poised handling of the colors. In the light, almost floating composition of "Helle Akzente", Nay masterfully succeeded in transferring the lightness and coloristic mastery of his watercolors onto the canvas. [JS]
More Information
+
Sell
Get a free appraisal for a similar object!
+
Register for
Ernst Wilhelm Nay
+
Buying from A-Z
+
Contact a specialist
+
Ernst Wilhelm Nay Biography
Share