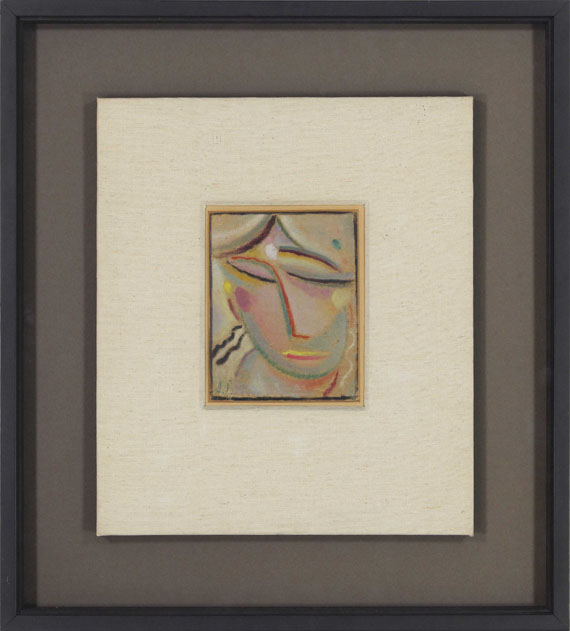 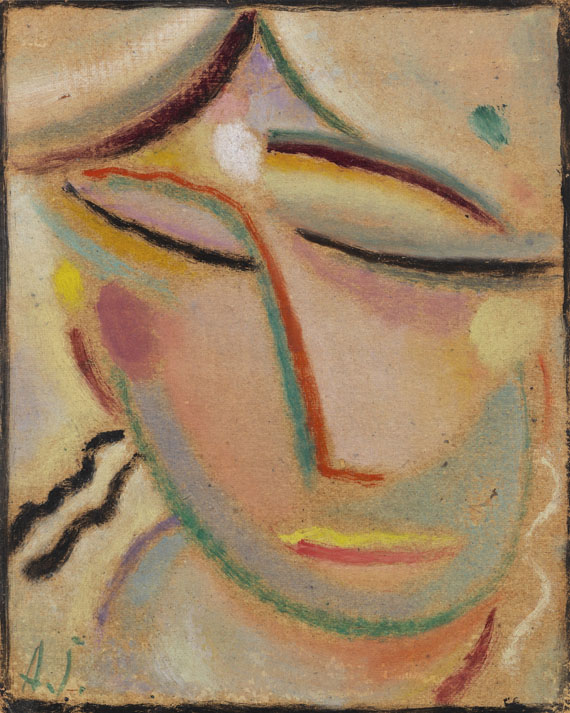 LITERATURE: Stuttgarter Kunstkabinett, 31st auction. Modern Art; May 20/21, 1958, lot 432 (no illu.).
I made these variations for several years, and then I had to find a form for the face, as I had understood that real art can only be creatd with religious sensation. And the human face is the only way to express that."
Alexej von Jawlensky, quote from: Tayfun Belgin, Alexej von Jawlensky. Eine Künstlerbiographie, Heidelberg 1998, p. 103.

When the war broke out in 1914, the native Russian Jawlensky was forced to leave Munich with his family and Marianne von Werefkin, and went into exile in Switzerland. He first settled in the small village of Saint-Prex on Lake Geneva, where Jawlensky rented an apartment, which meant that he no longer had his own studio. Instead he worked in a small study, with a window that offered a view that would be of fundamental significance for the series of "Variations on a Landscape Theme", which initially dominated the works that came into existence during the years spent in Switzerland. In October 1917, however, Jawlensky left the small, remote town of Saint-Prex and settled in Zurich with Marianne von Werefkin, Helene Nesnakomoff and their son Andreas. There the artist again turned to the representation of the human face, which was the birth of the famous series "Mystical Heads". Based on a portrait that Jawlensky made of his young admirer and later authorized dealer Emmy "Galka" Scheyer in Zurich in 1917, Jawlensky succeeded in developing a first, courageous stylization of the head motif in this series of works, which led to subsequent works with a focus on the human face, the series of the "Heilandsgesichter" (Savior's Faces), to which our colorful composition belongs. In the following he conceived the "Abstract Heads" and finally the "Meditations". The strict formal reduction and stylization of these portraits, which go far beyond the traditional depiction of the portrait’s subject, was seminal in art history. The gently swinging forms and colors, the large closed eyes and lines reduced to a minimum are wonderful. Forehead, eyelids and cheeks are made up of several clearly separated color fields and develop an extraordinary, almost abstract color tone, which in its entirety could hardly be more harmonious. [JS]
More Information
+
Sell
Get a free appraisal for a similar object!
+
Register for
Alexej von Jawlensky
+
Buying from A-Z
+
Contact a specialist
+
Alexej von Jawlensky Biography
Share