• From the important work series "Figurenmauern" (Figure Walls, 1942-1950), in which Baumeister renders a masterful play with pre-historic associations.
• Grohmann calls the merry figure walls and landscapes from the post-war era the best that Baumeister ever created.
• Excellent composition in rare soft rose colors and of museum quality.
• Willi Baumeister is the protagonist of German post-war modernism and participated in documenta I (1955), II (1959) and III (1964).

Essay
From the early 1930s on Baumeister began to develop an interest in structures that had the right properties to both animate and decentralize the pictorial ground. This approach becomes obvious in the painting offered here, where the pictorail ground becomes carrier of an almost linear, graphic composition. Primeval associations are evoked, a phenomenon that Baumeister chose as a fundamental theme in several of his work cycles, since the artist had a deep interest in pre- and protohistory. He collected fossils, ancient vessels and stone axes and examined the origins of art in the early Stone Age by looking into the techniques of Stone Age rock- and cave painting. The loosely arranged forms and colored surfaces in "Heitere Bewegung auf Rosa" (Merry Motion on Rose) convey a cheerful weightlessness that leaves room for all kinds of associations. Associations with musical tempos often determine the work. Here, with a light hand, the primeval aspect is disguised in a burlesque robe and thus free from burdensome meaning. The subtle humor that accompanies this composition is reflected in the delicately dancing manner in which the shadowy figures move across the pink background. By using synthetic resin, Baumeister achieves a plaster-like surface effect, which underlines the prehistoric character of the presented repertoire of forms. The wall-like presence of the composition is heightened by the dry style of painting and the fragmentation and image-filling arrangement of the forms. Further works from the series of the "Figurenmauern" (Figure Walls) are at, among others, the Osthaus Museum in Hagen, the Nationalgalerie in Berlin and the Staatsgalerie in Stuttgart. [JS]
More Information
+
Sell
Would you like to sell a similar object?
+
Register for
Willi Baumeister
+
Buying from A-Z
+
Contact a specialist
+
Willi Baumeister Biography
Share 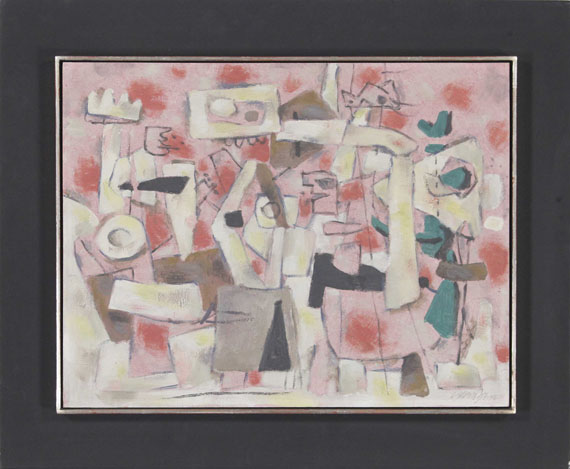