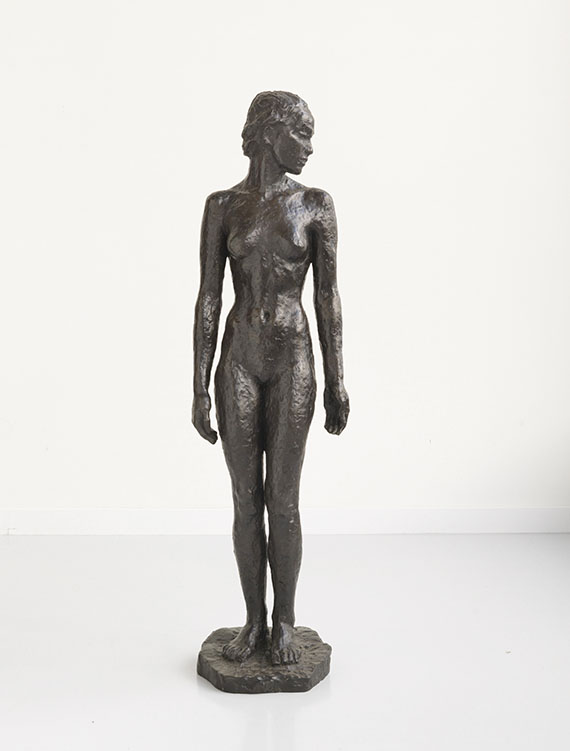 enlarge image
+
300
Georg Kolbe
Junge Frau, 1926.
Bronze with black brown patina
Estimate:
€ 60,000 / $ 62,400
Sold:
€ 275,000 / $ 286.000
(incl. 25% surcharge)
Junge Frau. 1926.
Bronze with black brown patina.
Base with monogram, foundry mark "H.Noack Berlin Friedenau" and inscription "I" as well as with the stamp "made in Germany". One of 10 casts. Height: 128.5 cm (50.5 in).
Cast before 1940 by art foundry Hermann Noack, Berlin-Friedenau. Only U.S. export casts were numbered "1" and "2", as lower import tax was levied on the first two casts; the number itself does not índicate the chronological order the casts were made in. For tax saving reasons some of the sculptures were assigned more than one number.
• Lifetime cast.
• Apart from this bronze to date no other copy has been offered on the international auction market.
• A bronze cast of the "Junge Frau" used to adorn the patio of Kolbe's residence.
• From the notable collection of Henry Ford, president of the Ford Motor Company.

LITERATURE: Ursel Berger, Georg Kolbe - Leben und Werk, with the catalog of the Kolbe sculptures at the Georg-Kolbe-Museum, Berlin 1990, cf. pp. 290 and 291.
"Among my Berlin acquaintances Kolbe is the one with the strongest personality. If you see him among all his works in his studio, every question becomes needless. You feel that this man is one with his work, that [sic!] nothing unneccesary will ever come from his hand."
Günter von Scheven about Georg Kolbe on January 17, 1932, quote from: Maria Frfr. von Tiesenhausen, Georg Kolbe. Briefe und Aufzeichnungen, Tübingen 1987, p. 129

Georg Kolbe was one of the most successful sculptors of his time. Kolbe initially studied painting in Dresden and Munich. After studying in Paris, where he came into contact with Rodin's sculptural work, Kolbe switched to sculpting. Now based in Berlin, Georg Kolbe had his artistic breakthrough when Ludwig Justi bought his sculpture "Dancer" (1911/12) - which was highly acknowledged an exhibition at the Berlin Secession - for the collection of the Nationalgalerie. The First World War interrupted his artistic development, but he returned to Berlin unharmed in January 1919 and was able to build on the success he had before the war. Paul Cassirer dedicated a solo exhibition to Kolbe in the autumn of 1921. In 1927 he took part in a large exhibition at the Glaspalast in Munich. The sculpture "Junge Frau" (Young Woman) was made at the peak of his creation, presumably after the same model as the "Knieende" (Kneeling Woman). She stands in front of us in a completely relaxed pose, elegantly tilting her head just a little to one side, turning her face with the eyes half-closed away from us. In her beauty and nudity, she entirely rests within herself. Kolbe did not aim to create any spatial effect, but rather wanted to render a self-contained figure. However, she attracts the viewer's attention precisely because of the calm appeal she emanates. Without any grand gestures and in an allegedly simplified representation, he attained a striking expression of a harmony of body and soul despite all its tenderness. A cast "Junge Frau" adorned the patio of Kolbe's residence on Sensburger Allee in Berlin. In an air raid on Berlin on December 16, 1943, a bomb landed exactly there and destroyed the sculpture of which only the head survived. Kolbe had the head restored and put it on a pedestal; it remained in his possession until his death and testifies to the sculptor's special bond with this figure. [SM]
More Information
+
Sell
Get a free appraisal for a similar object!
+
Register for
Georg Kolbe
+
Buying from A-Z
+
Contact a specialist
+
Georg Kolbe Biography
Share