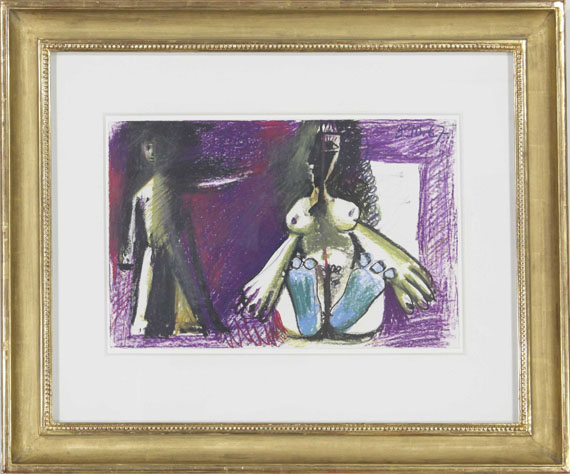 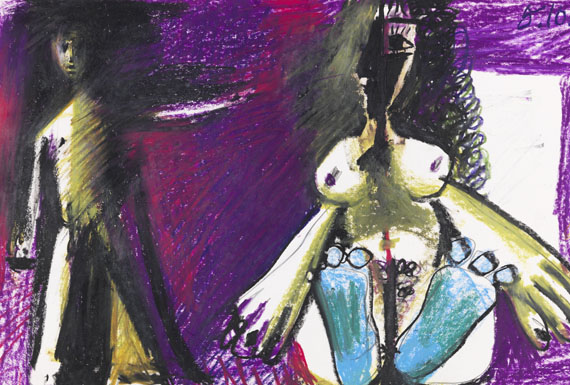 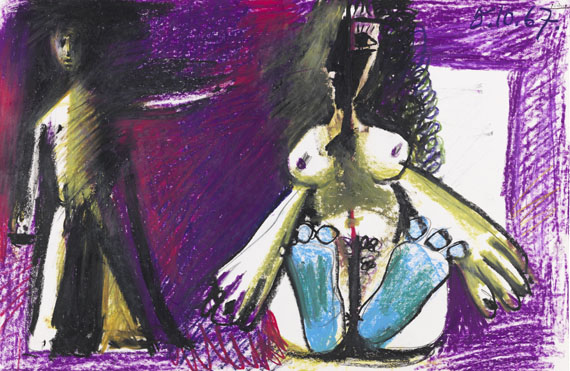 Accompanied by a photo confirmation issued by Maurice Jardot, Galerie Louise Leiris, Paris, on September 2, 1980.
The drawing was presented to Claude Ruiz-Picasso, Paris. The expertise is not at hand yet.

PROVENANCE: Galerie Louise Leiris, Paris (acquired directly from the artist, there registered with the number "12457/62143").
Galerie Beyeler, Basel (1988).
Private collection Baden-Württemberg (acquired from the above in 1988).

"When I was a child my moher said: 'If you become a soldier, you will be general. If you become a monk, you will be pope.' I wanted to be a painter and I became Picasso."
Pablo Picasso, quote from: H. Berggruen, Die Kunst und das Leben, Berlin 2008, p 15.

Picasso's graphic and coloristic mastery amazes the observer over and over again. Hardly any other artist of the 20th century could even come close to Picasso’s creative progressiveness. His work was formative for numerous tendencies in art history. He remained influential well into an old age. Picasso was an obsessed man, in constant search of new means of artistic expression, not only in terms of new styles and motifs, but also with regards to new techniques. Our luminous composition "Jeune garcon et femme assise" impresses both with its powerful coloring and its enormously sharp drawing. Both elements are characteristic of Picasso's artistic creation, while they live in a particularly masterful symbiosis in this work. Our sovereign composition was probably created on October 5th, 1967 in the course of the examination of Manet's famous scandal painting "Olympia" (1863, Musee'd`Orsay, Paris), which Picasso had previously been occupied in early graphic works. In addition to Manet's "Olympia", which caused a scandal at the Paris Salon in 1865, due to an aggressive displayed of eroticism, Picasso also took on Manet's "Le Déjeuner sur l'herbe" (1963), another famous scandalous picture in art history, as it shows a provocative scene of two naked women joining two dressed men outdoors. Manet's painting was denied participation in the Paris Salon and his work was shown in the parallel Salon des Refusés, which would later be acknowledged as a legendary exhibition and the birth of modern painting. Picasso, the celebrated master of Modernism, addressed the art-historical beginnings of modernity in his late work. He rendered the seated female nude in a simplified cubist outline in front of a bright violet background. Even if Picasso was blessed with a graphic skill that would even make his depictions of goats and cats worl-famous, his long and persistent commitment to the female body reveals his exceptional graphic talent most directly. In a kind of negative drawing method the artist uses the parts of the white paper that he left blank for the nude’s incarnate. Breasts, vulva and feet, which appear a little over-sized, due to the shortened perspective, are turned towards the viewer with an unsparing directness. In contrast to Manet, however, there is no female figure in the scene’s dark background but the blurred contour of a man, which, on the one hand increases the scene’s erotic appeal, and, on the other brings it closer to the complex of motifs of painter and model, which was of great imortnace to Picasso. In 1961 Picasso married the 46 years younger Jacqueline Roque, a ceramics seller whom he had met at Mandoura in Vallauris. Together they moved into Chateau Vauvenargues in Mougin. Jacqueline, with her expressive face, dark eyes and black, curly hair, was lover, muse and model at the same time. In October 1967 Picasso was intensively occupied with this motifs in a small series of works, and, in addition to our colored chalk drawing from October 5th, he created two paintings with similar motifs entitled "Homme et femme nus", which he varied until mid-November and up to to the painting "Homme à la pipe et nu couché" (Zervos vol. 27/154), which changed owners for almost 8 million US dollars at an auction twenty years ago. Our richly colored and elaborate oil chalk drawing is part of this exquisite series of works and is now offered on the international auction market for the first time. Despite Picasso’s high production of graphic works, colored compositions of this quality are extremely rare on the international auction market. [JS]
More Information
+
Sell
Get a free appraisal for a similar object!
+
Register for
Pablo Picasso
+
Buying from A-Z
+
Contact a specialist
+
Pablo Picasso Biography
Share