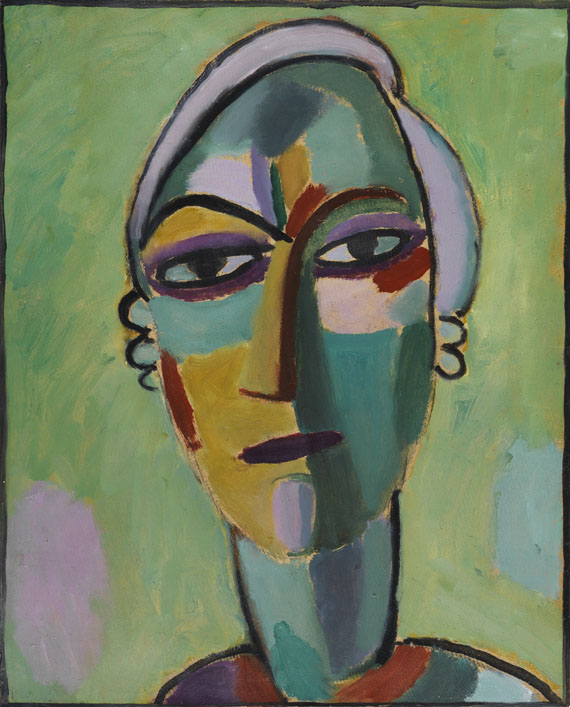 • Emmy "Galka“ Scheyer became the artist's muse in 1917.
• Marvelous document of Jawlensky's radical reduced style of his years in Swiss exile, which shows the influence of the Paris avant-garde.
• A painting of comparable quality from the series of the "Mystical Heads" is part of the collection of the Kunstmuseum Basel ("Mystischer Kopf: Mädchenkopf (frontal)", 1918).
• Privately-owned for more than 50 years.

LITERATURE: Clemens Weiler, Alexej Jawlensky, Cologne 1959, no. 189, with illu. on p. 241.
Clemens Weiler, Köpfe Gesichte, Meditationen, Hanau 1970, no. 166 (there titled 'Indianer').
"I painted the Variations over several years, and then I felt a neccesity to find a form for the face, as I had understood that real big art must be painted with religious sensation. And that I could only express in the human face."
Alexej von Jawlensky, quote from: Tayfun Belgin, Alexej von Jawlensky. Eine Künstlerbiographie, Heidelberg 1998, p. 103.

"In 1917 Jawlensky finally found a fulfiiling theme, which [.], more praying than painting, slid through his hands: the human face showing the imprint of the divine."
Werner Haftmann, Malerei des 20. Jahrhundert, 1954.

Essay
Fateful encounter
The encounter with Emmy “Galka” Scheyer in 1916 was a godsend for Alexey von Jawlensky. Trained in fine arts, she became intensively involved in marketing the artist from the 1920s on. Born in Brunswick in 1889, the eighteen-year-old decided to become an artist. She studied art at the British Museum and English at Oxford University. In 1910 she traveled through Italy, visited museums and made a lot of drawings. In autumn of that year Scheyer went to Paris, continued her studies of art at the Ecole des Beaux-Arts and also took classes in music music at the Paris Conservatory, and also got a diploma in French. When the First World War broke out in 1914, Scheyer returned to Germany and continued her education earning a degree in art history in Munich. In 1915 she visited an exhibition of Russian artists in Lausanne, where she saw works by Alexei von Jawlensky for the first time. Impressed by the powerful expressionist painting, she sought contact with him, and a year later, in 1916, traveled to St. Prex, where Jawlensky had lived with the painter Marianne von Werefkin, Helene Nesnakomow, whom he would later marry, and their son Andreas since the outbreak of the war. This was the beginning of an intense, intellectual-spiritual relationship between Scheyer and Jawlensky.
The series of "Mystical Heads"
When Jawlensky's family and Marianne von Werefkin moved out of their cramped apartment in October 1917 and away from the small, remote town of St. Prex on Lake Geneva to Zurich, motifs and palette began to change. The artist took delight in the cultral life the city offered, the exhibitions and the interesting people. Over the next six months Jawlensky worked on the series of works of "Mystical Heads" and developed a new variant of the head motif, based on a portrait that Jawlensky had made of Emmy "Galka" Scheyer in Zurich in 1917. Despite many individual details of her characteristic, rather youthful appearance, Jawlensky clearly stylized the face with pointed color fields and distinctive lines. For him it was important to emphasize the face‘s charisma and to work out the personality, rather than the individuality, of the depicted person. The stay in Zurich also marked a turning point for Emmy Scheyer: her friendship with Jawlenskys, her devotion to the Dada circle around Arthur Segal, Tristan Tzara, Hans Richter and Hans Arp, shaped her understanding of the avant-garde and made her decide to give up painting in favor of promoting art. After the end of the war, Scheyer returned to Germany and took care of the marketing of Jawlensky's works.

"Mystical head, Galka Fatum"
The relationship with Emmy Scheyer, who would consequently also become an inspiring muse, was very deep right from the beginning on, to which the portraits that Jawlensky painted of here in 1917 also testify; additionally, the portraits played an important role in the development of his painting style. After the variations of views from the window of his apartment in St. Prex, Jawlensky began to experiment with mystical heads in October 1917. He took up the brightly colored expressive heads from the years before the First World War, while reinterpreting them in an individualized and at the same time stylized monumentality: Heads that Jawlensky made subject to his radical representation, their physiognomies rendered in traits from his self-developed kit with reduced to open or closed eyes, strong eyebrows, clearly set noses, fine line-like mouths, hairline and cheeks in a bright rouge. Several paintings from the series of the Mystical Heads clearly show the stylized portrait of Emmy Scheyer, as it is the case with one of the first portraits "Mystischer Kopf: Galka, 1917 N.21, “Mystischer Kopf: Kopf G. 2, 1917 N. 6 or “Mystischer Kopf: Porträt E. S., 1917 N. 12 and the portrait presented here is also part of this fascinating, colorful series: "Mystischer Kopf: Galka Fatum, 1917 N. 8." In addition to her striking facial features, it is the shape of the nose, the elongated face and the black curls that are typical of Emmy "Galka" Scheyer. On the back, the artist left another piece of evidence of his affection by naming the portrait: Galka Fatum - Fateful Galka! Despite its formulistic details, the series of Mystical Heads also shows condensed facial features of stylized portraits of other women, such as that of Helene Nesnakomow. But “Galka's” traits can be seen in so many of these heads, her appearance dominates the series. And “Galka” Scheyer would continue to play an important role in the artist's life marketing his work with great success, not only in Germany, but also in the USA.
The fateful dream
Angelika Jawlensky recalls that at the end of 1920, while Jawlensky was in Zurich for recovery from an illness, he wrote an undated letter on paper with the clinic's letterhead to Emmy in which he tells her about a dream he had. The artist describes how he was looking for Helene at night in Ascona in deep darkness in 1918 and how he could not find her at first. “It was getting darker and darker and I hurried to reach the building. A few steps in front of me a ‘Galka‘ flew up from the ground and sat on my chest and hugged me, as if she felt warmth or friendship. Tenderly I pressed the thing to my chest and eagerly hurried forward”. "Galka" is the Russian word for jackdaw. [MvL]
More Information
+
Sell
Would you like to sell a similar object?
+
Register for
Alexej von Jawlensky
+
Buying from A-Z
+
Contact a specialist
+
Alexej von Jawlensky Biography
Share 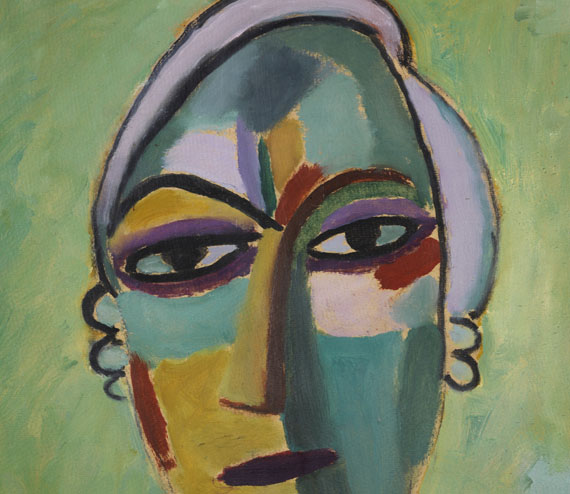 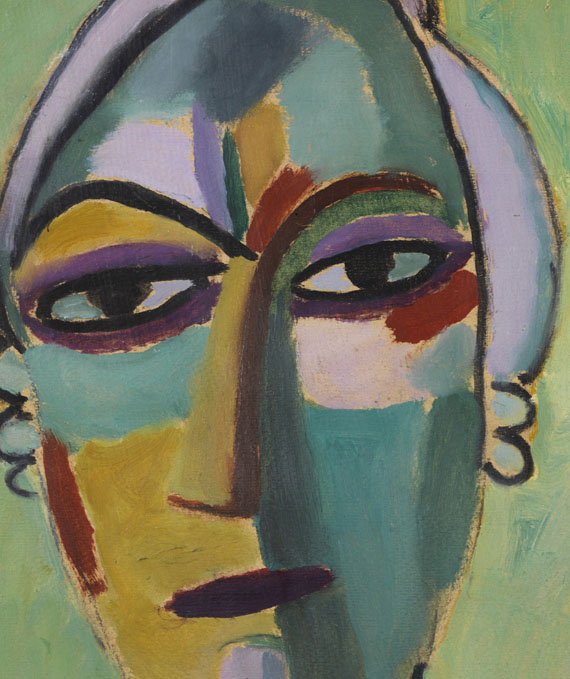