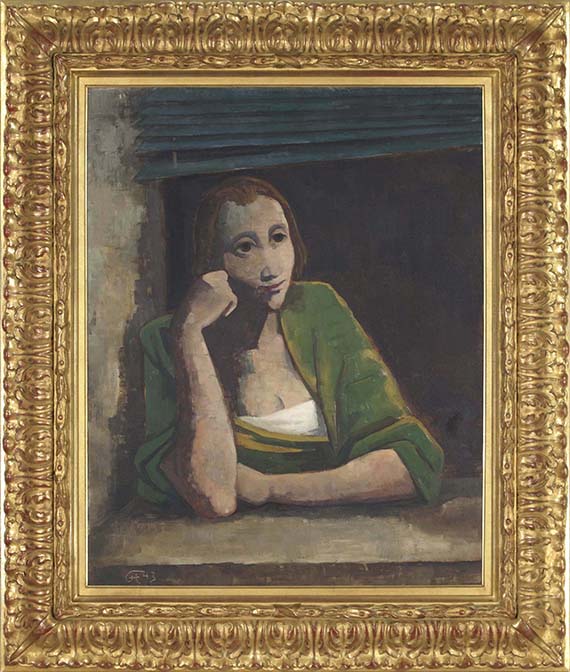 • Consistent provenance.
• Captivating visualization of a particularly expressive melancholy.
• The artist renders a particularly appealing and timeless depiction through the motif's simplicity, the reduced palette and the bold composition lines of the surrounding architecture.

This work is registered in the Karl-Hofer-Archive, Cologne, with the number "N 20".


Karl Hofer's extraordinary painterly skills with respect to the figure portrait also become evident in the graceful-melancholic work offered here. Hofer created a work that, as it is the case with many works in his oeuvre, makes do with a sparing use of objects and accessories, does without a clearly defined narrative environment and needs only a slight notion of eroticism. Nevertheless - or perhaps precisely because of this – it conveys an aura of a dignified, strangely timeless aloofness and has a very strong allure. Hofer artfully placed his female protagonist in an almost empty pictorial space. Slight notions of a sparse architecture frame the young woman with the help of clear lines and geometrically arranged surfaces. Only a slight incline of the crookedly folded blind breaks the rectilinearity of her immediate surroundings. Due to the reduced, even minimalist representation and the unusual combination of different shades of green, the figure itself takes center stage, and is the only thing that is of importance here. In 1932 and 1934, the artist dealt with the motif of a girl pensively lingering at a window in two further versions made in Hofer‘s typical manner. This repetition and variation of a certain motif, sometimes over several years or even decades, is considered a characteristic creative principle in the artist's oeuvre. In a lengthy process, Hofer changed, condensed, clarified and defined the chosen pictorial idea and, with this special concentration of the motif, attained a uniquely increased form and expression in his works. A first version of the depiction from the early 1930s shows the female figure with a striking hairstyle and a much more grave look.
With this calm and unagitated pictures, the painter, who had a sensitive and melancholic nature, created a contrast to the world in ruins around him that allowed him to escaped from the tragic reality of that time. He "survived the anti-humane and art-hostile times of National Socialist rule only with the help of his painting" (Henrike Holsing, ''Er malt die Stille'. Lesende und Sinnende im Werk Karl Hofers, in: ex. cat. Karl Hofer. Von Lebensspuk und stiller Schönheit, Kunsthalle Emden, Ferbuary 11 -June 17, 2012, p. 128). The work offered here was created during one of the artist's hardest years. As early as in the 1930s he was ostracized by the National Socialists, over 300 of his works were removed from German public collections, and the Reich Chamber of Culture imposed an occupational ban on him and he was suspended from his position as university lecturer. Nevertheless, after a long stay in Switzerland, Hofer returned to Germany at the beginning of the war, and lived in Berlin again as of 1941 . In 1943 - the year our work was created - a fire destroyed his studio during the first major air raid on Berlin on March 1st, and most of the works he had stored there burned. "Job‘s news - my studio went up in flames, my entire work destroyed in a terrible attack on Berlin. I saw it burn. It is the most terrible thing that has ever happened to an artist, but I am not easy to break and want to." try [.] to resume working." (Karl Hofer in a letter from Berlin in March 1943 to Konrad Hager, quoted from: ex. cat. Karl Hofer, Schloss Cappenberg, 1991, p. 167). His longing for silence, harmony and an escape from the real world could hardly ever have been stronger than in those years. In the following months, Hofer, among other things, repainted some of the works that were destroyed and believed lost during the war, or revisited themes and motifs he was intensively ocupied with over his artistic career and that have a particularly prominent position within his oeuvre. [CH]
More Information
+
Sell
Get a free appraisal for a similar object!
+
Register for
Karl Hofer
+
Buying from A-Z
+
Contact a specialist
+
Karl Hofer Biography
Share