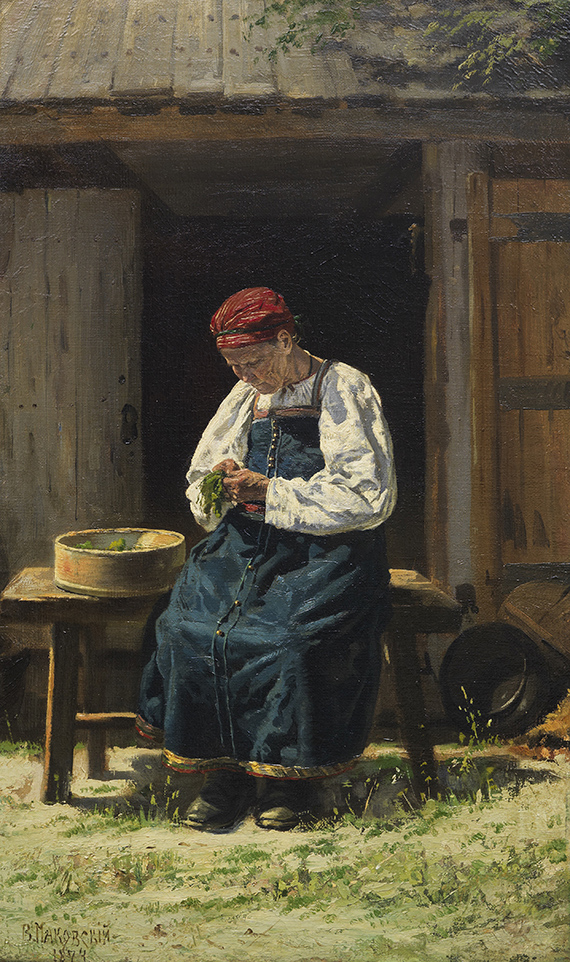 • After it has been privately-owned for almost 100 years it is now offered on the auction market.
• Significant work from the artist's early creative period, made after the artist had joined art reform-oriented group of the "Peredwishniki".
• The artist put focus on the individual figure of the working farmer in a haunting and technically masterly manner.
• Pavel Michailovitch Tretyakov, the 19th century's most influential gallery owner in Russia, collected Makovskij's works while the artist was still alive.
• Works by Makovskij are in prestigious Russian collections such as the State Tretyakov Gallery, Moscow, and the Russian State Museum Saint Petersburg, which is home of the most important collection of Russian art.

With a copy of an expertise from I. M. Sacharowa, State Tretyakov Gallery, Moscow, who examined the original work as part of the exhibition "Russian Realism 1850-1900" at the Staatliche Kunsthalle, Baden-Baden, on January 5, 1982.
We are grateful to Dr. Elena V. Nesterova for the kind support in cataloging this lot. The work will be included into the forthcoming catalog raisonné of the Makovskij family of artists.

Vladimir Egorovitch Makovskij dedicated this unsentimental portrayal to a simple Russian woman. The old farmer's wife is sitting on a wooden bench in front of her simple wooden hut engaged in plucking greens. Simplicity lies also in her apparel consisting of a blue overdress and a white blouse, as well as the typical red headcloth, as it is commonly worn by women in the northern Ukraine, which he often showed in his works of the rural Poltava region. Despite the reduced scenic, narrative element and focus laid entirely on the concentrated work and the precise depiction of the woman's face and hands, the work is to be understood as an expression of important aspects of Russian art and social history. Makovskij comes from a well-known Moscow artist family. The son of the painter and art collector Yegor Ivanovitch Makovskij, one of the founders of the Moscow Art School, he grew up in a house where, among others, important writers and thinkers such as Nikolai Gogol and Alexander Pushkin were frequent guests. His brothers Konstantin and Nikolai, as well as his sister Alexandra also became successful artists. He finished his studies at the Moscow Academy in 1869 and joined the group "Peredwishniki" (Russian for "Wanderer") founded in 1870, one of the most important secessionist groups in 19th century Russia. The group positioned itself against an academic painting accessible only to the upper class. Their democratic and social reformative concept of art became evident in both their choice of motif and their efforts to show their art not only in the metropolises Moscow and St. Petersburg. People living in smaller towns should also have the opportunity to enjoy art, which is why their exhibition toured to cities such as Kiev, Odessa, Riga and Kazan. Shaped by the idea of art as a means of creating awareness and unity, the painters of the group devoted their depictions to people of the lower classes, rendering them in an extremely subtle, observing realism, however, sparing them the stereotypical appeal of characters in genre painting. Social differences, class-specific habits and small and large events that determine the everyday reality of ordinary people are captured in an often both fascinating lively and yet deeply psychological way, which testifies to the painters' approval of the reform efforts of Tsar Alexander II, who, with the abolition of serfdom in 1861, gave peasants an independence and freedom that also required a new status in art. Between 1870-1910 the influence of the Peredwishniki also showed in international exhibitions; they were supported by Pavel Michailovitch Tretyakov (1832-1898), who acquired numerous works for his gallery. In 1923 the group joined the Association of Artists of Revolutionary Russia, whose naturalistic style formed the basis for Socialist Realism in the 20th century. Most recently, the Kunstsammlungen Chemnitz, in collaboration with the State Tretyakov Gallery, Moscow, the State Russian Museum, St. Petersburg, and the Stockholm National Museum, honored this important movement with a large exhibition. [KT]
More Information
+
Sell
Get a free appraisal for a similar object!
+
Register for
Vladimir Egorovitch Makovskij
+
Buying from A-Z
+
Contact a specialist
Share