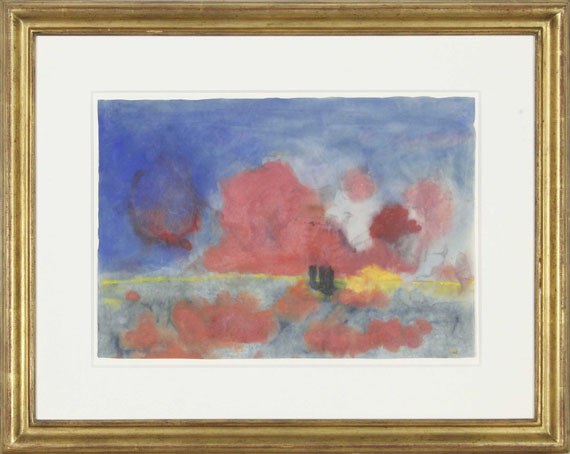 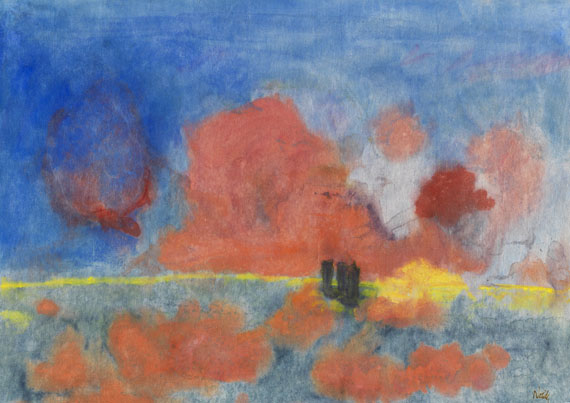 With the copy of a photo expertise from Prof. Dr. Manfred Reuther, Foundation Seebüll Ada and Emil Nolde, from December 23, 2008.

The sea with red clouds and dark sailing boats is staged here by Emil Nolde as a flaming, dramatic glow of an evening sky over the sea. Nolde's pictorial definition shows his experienced view of a reality, the relativity and complexity of which is increasingly replaced by a sensual understanding, while the immediate reality of the image of a seascape is refracted and dissolved. Thus the colors directly describe the brightness of the motif, not a line circumscribes the events on the water, on which an 'impression' of the red cloud is reflected as islands of mist. The black sailing boats are on target for the horizon, which, like a yellow line, divides the sheet into a heavenly plane and a sea plane. Nolde articulates himself through color, its luminosity or refraction and opacity, the layers permeate the paper. Color is Nolde's most sensual medium, with which he spontaneously and emotionally spreads out with a fully soaked brush what he sees and experiences, past and present, his inner visionary images, and, as here, wet-on-wet in spots and gradients. With this motif "Meer mit roten Wolken und dunklen Seglern", Nolde made a masterpiece in terms of the peculiarity of the artistic process of watercolors, which not only requires technical skills, but also a pronounced sense for the situation, for a special light, for the emotional atmosphere, for an inner feeling of happiness. Nolde's strong sense of individuality formed the basis of his artistic imagery: "The painter doesn't need to know much, it‘s nice to paint as accurately as he breathes and as he walks", he admits. It is the immediacy with which Nolde breathed that unmistakable soul into his pictures and thus sought an enchanting unity with the motif. [MvL]
More Information
+
Sell
Get a free appraisal for a similar object!
+
Register for
Emil Nolde
+
Buying from A-Z
+
Contact a specialist
+
Emil Nolde Biography
Share