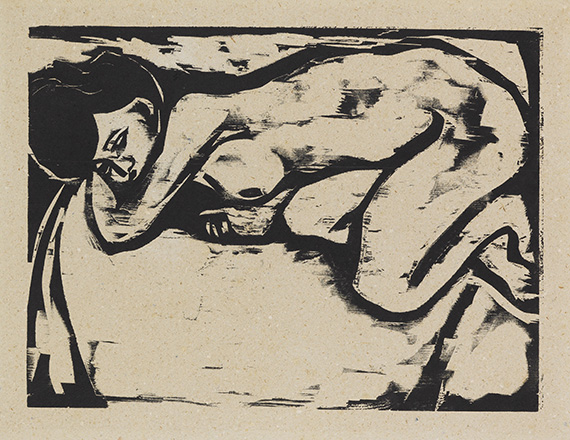 Essay
Kirchner's drawing that this woodcut is based on is particularly fascinating for its powerful play of lines, it shows Kirchner's carefree generosity in dealing with formal boundaries between surface and space. This woodcut is also a classic example of the art of omission. Kirchner sketched a crouching, obviously sleeping woman in a concentrated section and creates a pleasantly liberating tension with a cutting line executed in different degrees of intensity. The place, or rather the stage for the work offered here is his first studio in Dresden: "So I moved into an abandoned butcher shop in the proletarian quarter of Dresden, with just a few boxes, a camp bed and my tools. Despite the poverty, this soon became the meeting place for the girls living in the vicinity, and so I had the best models and friends with whom I went to Moritzburg to paint outdoors", Kirchner recalled. He decorated his studio in a former shop on Berliner Straße 60, with tie-dyed curtains and screens with depictions of 'barbaric' lovers, he built his own furniture, carved crockery and accessories, which he also repeatedly used as decorative background for studio scenes. And one of the protagonists is Dodo, Doris Große; for Kirchner she certainly was one of the the most impressive women, at least this is true for the time in Dresden, where he may have met her as early as in 1903. She probably became his lover in 1909 and, strangely enough, was left behind when he moved to Berlin in autumn 1911. Even in later years in Davos, Dodo was still on Kirchner‘s mind, as for instance in 1919, when he raved about her wonderful, fragrant body in his diary (Davoser Tagebuch, edited by Lothar Grisebach, Neuausgabe durchgesehen von Lucius Grisebach, Ostfildern/Stuttgart 1997, p. 40). In the Dresden years Dodo was the artist's lover and muse and sat him model in numerous paintings, drawings, watercolors and graphic works, as it also is the case with this woodcut here. She was not only integral part of his work, but also of his domestic life. Dodo was around in Kirchner's studio all day long and was not safe from his quick eye, just as it shows here, where the artist wrest this quickly captured scene from the wooden block. It is a particularly graphic drawing with the body rendered with strict contours, and testifies to Kirchner's great admiration for the lady‘s beautiful body: a great homage to Dodo. [MvL]
More Information
+
Sell
Would you like to sell a similar object?
+
Register for
Ernst Ludwig Kirchner
+
Bidding Options
+
Written bid
+
Buying from A-Z
+
Contact a specialist
+
Ernst Ludwig Kirchner Biography
Share

More offers for Ernst Ludwig Kirchner
+
and all other offers
You might also be interested in
+
and all other offers
Buyer's premium, taxation and resale right apportionment for Ernst Ludwig Kirchner "Liegender Akt"
This lot can be subjected to differential taxation plus a 7% import tax levy (saving approx. 5 % compared to regular taxation) or regular taxation.