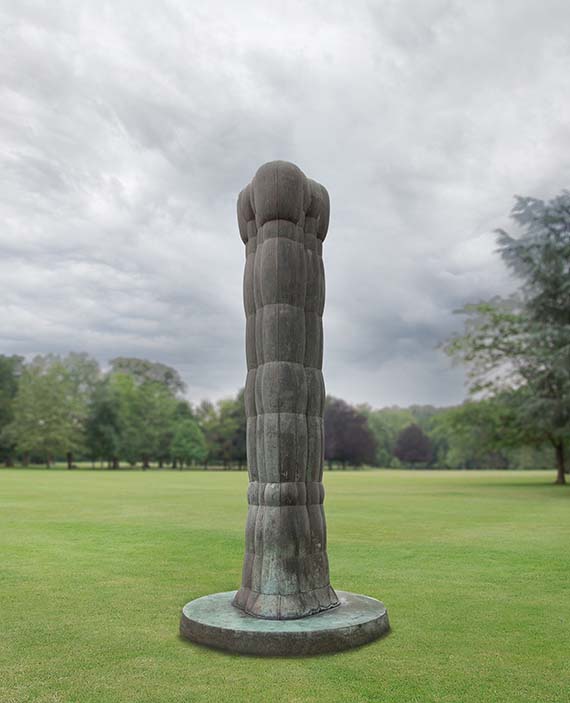 • Unique object.
• This is the largest bronze ever offered on the international auction market.
• The human figure is the be all and end all of his abstract figuration.
• The Leopoldmuseum in Vienna honored the artist with a comprehensive exhibition in 2017.

Weare grateful to the Atelier Avramidis, Vienna for the kind support in cataloging this lot.

"If I had developed a diffferent character, and would have sought orientation with the zeitgeist, I wouldn't have been able to do the work I did. I'd just be a conformist."
Joannis Avramidis, quoted from: Michael Semff, Joannis Avramidis. Skulpturen und Zeichnungen, Munich 2005, p. 309.

Avramidis was born in present-day Georgia to parents belonging to the Greek minority in the country. He was 17 years old and in the middle of his education at the art school in his native town when his father was arrested by the Stalinist regime and died there. The mother fled back to Greece with the children, first to Athens and later to Macedonia. In 1943 - Greece was occupied by the Germans - he was deported to Austria as a forced laborer. He stayed in Vienna and after the war began to study painting before finding his way to sculptural work under Fritz Wotruba, one of Austria's most important sculptors. After rapid national and international recognition, he finally took over a professorship for sculpting at the Academy of Fine Arts in Vienna from 1968 until his retirement in 1992. He always cultivated his Greek roots and called himself a Hellenist. The influences of Greek antiquity also resonate in his own artistic work. Originally trained as a painter, he was drawn to sculpture. Column-like standing figures, reminiscent of classic antique sculptures such as the Hera of Samos, are characteristic of his work. The "Great Triassic" from 1970 is an impressive example of Joannis Avramidis' distinctive sculptural practice. Cast in dark patinated bronze, the pillar figure, over 3 meters tall, consists of swelling, gently cylindrical forms that are reminiscent of the curves of the human body. They flow organically into one another and fan outwards, as if they were condensing several bodies into an abstract totem. It is a stylized, de-individualized appearance that reflects the inner space of the body rather than a silhouette. Their design is the result of ever new variations, with which Avramidis, starting with precise preliminary drawings, plays through the possibilities of further reduction and compression of the human body. This reduction to the essentials, from which nothing can be taken away and to which nothing can be added, gives his sculptures their impressive rigor, their power and their rhythm. The numerous exhibitions and his participation in the documenta in Kassel (1964 and 1977) and the Venice Biennial (1962), the numerous works in public spaces, as well as numerous prizes and awards, bear witness to the far-reaching appreciation of his artistic work. [SM]
More Information
+
Sell
Get a free appraisal for a similar object!
+
Register for
Joannis Avramidis
+
Buying from A-Z
+
Contact a specialist
Share