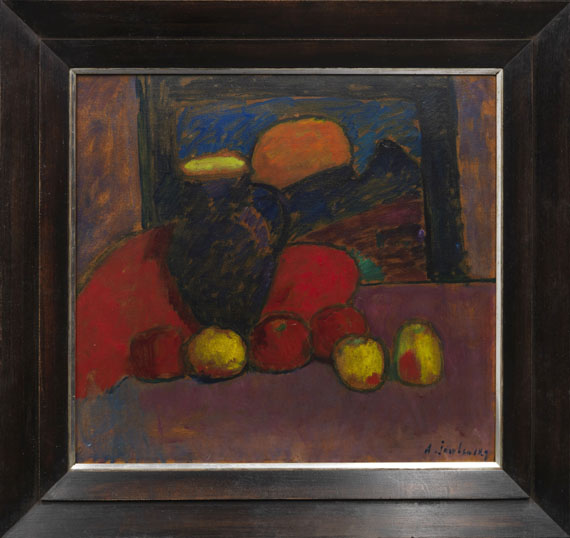 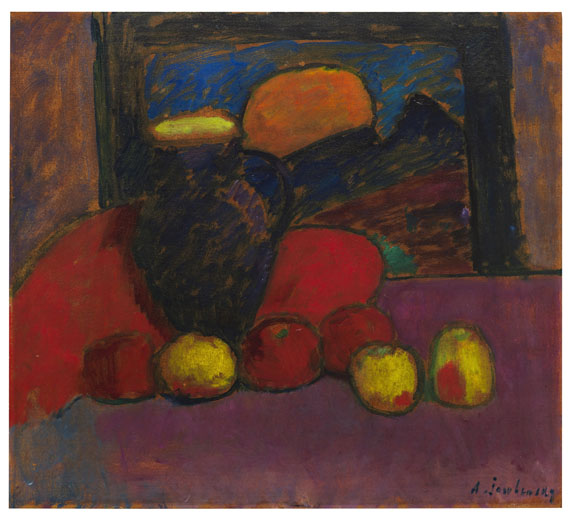 204
Alexej von Jawlensky
Stillleben, 1910.
Oil on cardboard
Estimate:
€ 250,000 - 350,000
$ 290,000 - 406,000
Stillleben. 1910.
Oil on cardboard.
Bottom right signed, dated on the reverse. Titled, signed and inscribed "n 9" by the artist on a label on the reverse. Here inscribed "A.J.Eddy" and "8" on the reverse. 49.5 x 53 cm (19.4 x 20.8 in).
The painting depicted in the background of this work is Jawlensjky's "Murnau – Landschaft mit orangener Wolke" from 1909[EH].
• An extraoridnary work of museum quality.
• Jawlensky painted the "Stil Life“ during the prolific years in Murnau.
• With great self-confidence Jawlensky references his painting "Murnau – Landschaft mit orangener Wolke“ from 1909.
• Through pure colors in large fields withr colored contours the artist finds a compositional unity: Color, harmony and conception.
• Impressive history: 1. Arthur Jerome Eddy, who met Jawlensky in 1912, author of the first US book on modern art; 2. Katharina Kuh, gallerist and later first curator for European art at the Chicago Art Institute.

Color, surface and line
Alexej von Jawlensky changed his painting effectively in the autumn of 1908 when he worked with Marianne von Werefkin, Gabriele Münter and Wassily Kandinsky in rural Murnau. While the impact van Gogh's painting had on the four artists is still latent in their minds, the examination of Paul Gauguin and subsequently with the Fauves, in particular with Henri Matisse and André Derain, becames increasingly dominant: it is the clear assignment of color, surface and line. In addition to the traditional subject of portraits and landscapes, the still life genre was also at the core of the Fauves‘ attention, and also drew interest of Gabriele Münter and Alexej von Jawlensky, who used the painting of the French artists as a template for their own artistic expression. This in many cases led to strikingly similar motifs in the still lifes Jawlensky and Münter painted after 1908.

Expressionism as synthesis
The knowledge of the painting of the "Fauves" - Matisse, Derain, Vlaminck -, who caused a stir with their first presentation at the Salon d'Automne in Paris in 1905, would also change Jawlensky's palette at the end of the trip to Provence in autumn / winter 1906. Jawlensky sent six pictures to the Salon d'Automne in 1905 - mostly still lifes - but he was not in Paris himself, nor was he in France at all. A year later Jawlensky had planned to travel to Brittany, the artistic home of Gauguin and his successors, the "Nabis". Whether Jawlensky and Werefkin also visited Pont-Aven and Le Pouldu in the south of the peninsula, where Gauguin temporarily lived, can be assumed, but it is not known. In any case, the Atlantic landscape had a lasting impact on Jawlensky: “For the first time I understood to paint not what I saw, but what I felt [.] And I knew how to translate nature into colors according to my glowing soul. I painted a lot of landscapes there, from the window bushes and Breton heads. The colors were glowing. And I felt happy deep inside back then”, recalled the artist in his memoirs in elation (quoted from: Alexej von Jawlensky, Reisen, Freunde, Wandlungen, ex. cat. Dortmund 1998, p. 42).
Jawlensky was encouraged to simplify colors and shapes by his friend Willibrod Verkade, an ardent student of Gauguin. Not only in Jawlensky's still lifes did the contour also appear as an equal, image-organizing element in relation to color, surface and form. Through them the painter succeeded in detaching the color surfaces from being mere images of reality and made them subject to the order immanent in the picture as independent elements. With the staccato-like brushstrokes on the image surface, Jawlensky created additional suggestive forces, the dynamics of which he transfered to the entire composition.

In this “Still Life” from 1910, Jawlensky focusses on the contrast of bright red tones, and avoids too clear a contouring of the loosely arranged fruits in front of a dark blue jug , which looks like a strong violet surface. As far as the setting of the scene is concerned, the artist keeps the observer in the dark. Not only the jug in front of a bright red shape, a blanket (?) dominates the arrangement, but also the framed painting by the artist behind it: "Murnau - Landschaft mit orangener Wolke" from 1909. (Fig. ** ). With great confidence Jawlensky quotes himself here, and with the network of various elements such as ornaments, patterns, shapes, surfaces and colors he presents here he delivers proof of his extensive knowledge of the still life painting of a Cézanne or a Gauguin, both of which form a great ensemble in this painting. Jawlensky found the unity for his composition in the concept of cloisonnism coined by Gauguin, a painting aesthetic in which large surfaces of pure shades of colors are framed by a black or colored line: color, harmony and invention; Gabriele Münster was impressed by what Jawlensky explains to her as “Synthes”. In the founding circular of the “Neue Künstlervereinigung München” from 1909, Kandinsky took up the term “artistic synthesis” and described it as a “solution that currently unites more and more artists spiritually (..)”. Many years later, in 1951, Henri Matisse spoke about the idea of the Fauves' style of painting, to which he had made decisive contributions: “I examined each constructional element individually; the drawing, the color, the values and the composition. I tried to find out how these elements could be combined into a synthesis without the expressiveness of one component being diminished by the presence of another. I tried to find out how one could unite the individual pictorial elements into a whole in which an innate quality of each individual could be fully expressed. ”(Henri Matisse, La chapelle du Rosaire, 1951)
The still life left the artist's studio and became part of the important collection of Arthur Jerome Eddy (1859-1920) at an early paint. The lawyer with a strong interest in art, belonged to the first generation of American collectors of modern art. In 1913 he bought a sculpture by Brancusi at the Armory Show, he also acquired other works by Marcel Duchamp, Pablo Picasso, Franz Marc and four abstract paintings by Kandinsky. While traveling to Europe, he met many of the artists in person. Among them Jawlensky, whom he liked so much that he purchased a total of four works: "Portrait Marie Castell", 1906 (Catalog Raisonné 124), "Wegkreuzung- Murnau", 1910 (Catalog Raisonné 360) and "Ägypterin", 1913, (Catalog Raisonné 599). By the end of his life, the collection of Arthur Jerome Eddy comprised over 100 works of the avant-gard, some of which were transferred to the collection of the Art Institute Chicago in the 1930s. Our "Still Life" then found its way into the collection of Katharina Kuh (1904-1994). She first studied with Alfred H. Barr, the co-founder and first director of the Museum of Modern Art in New York, and opened an important gallery for modern art in Chicago in 1935. Between 1954 and 1959 she was the first female curator at the Art Institute of Chicago. [MvL]
More Information
+
Bidding Options
+
Bid by telephon / written
+
Contact a specialist
+
Buying from A-Z
+
Preview & Auction Procedure
+
Catalogue Order
+
Register for
Alexej von Jawlensky
+
Alexej von Jawlensky Biography
+
Sell
Get a free appraisal for a similar object!
Share 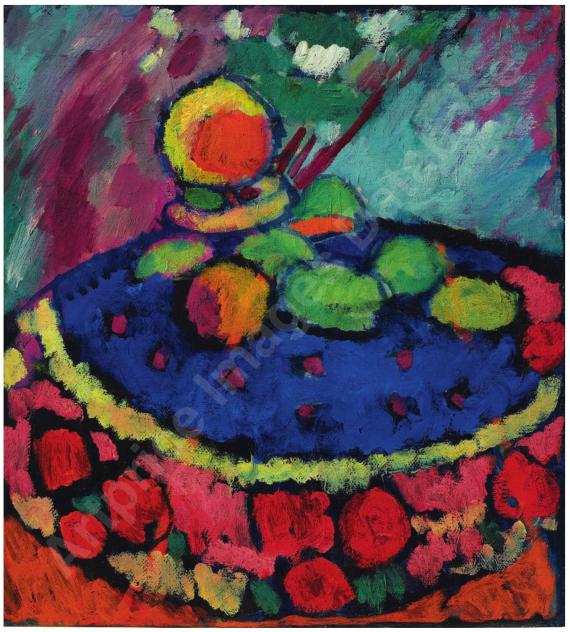 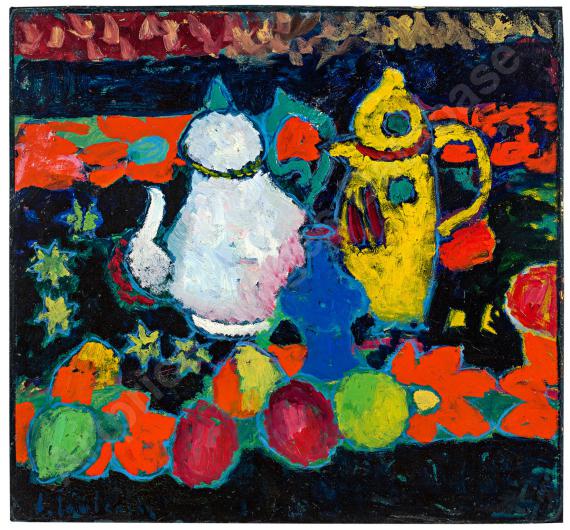 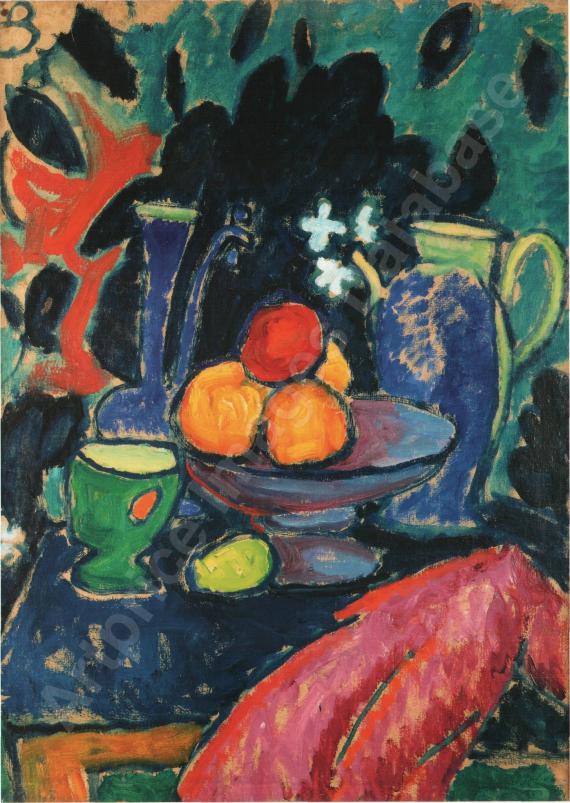 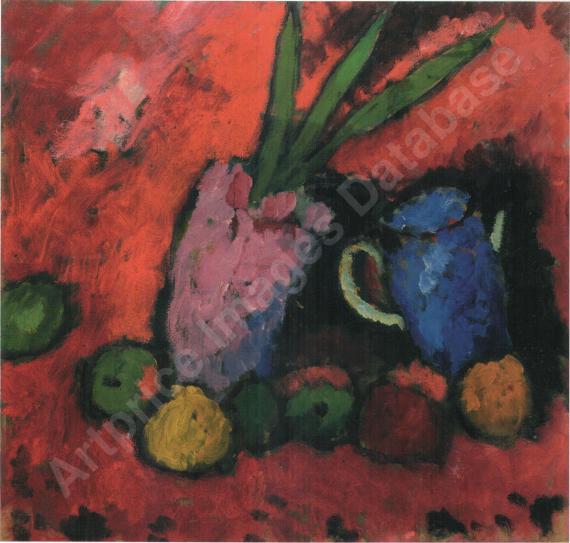