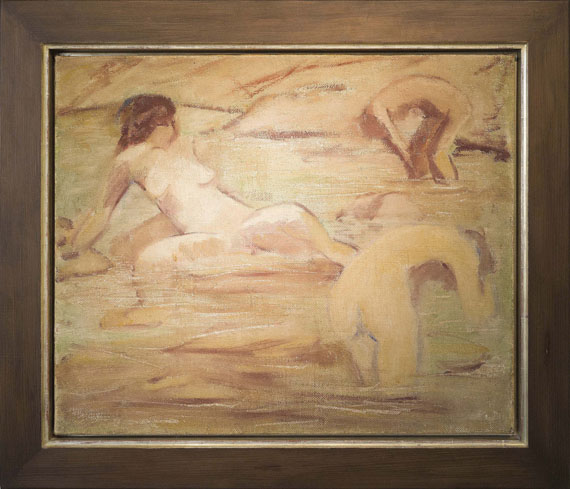 WITH THE GREATEST POSSIBLE SIMPLICITY

In addition to the depiction of intimate couples, bathers in ponds, the sea or the great outdoors, sunbathing youthful nudes are another key theme in Otto Mueller‘s oeuvre: countless variations on an apparently inexhaustible theme, which he described in the foreword to the first solo exhibition at Paul Cassirer in Berlin in 1919, as the aim of his endeavors to "express sensations of landscape and people with the greatest possible simplicity". In the greatest possible simplicity and originality, Otto Mueller painted this scene in shallow water in front of gently sloping dunes with a woman leaning back to the left, probably lolling on a stone, and two standing girls who are still bending forward looking for something? Lines drawn quickly and safely circumscribe the soft bodies, lift them out of the sandy nature that surrounds them; their heads bowed slightly forward, their faces, strictly framed or concealed by long chins-cut hair. Between the women frolicking in sea water and the suggestion of a coastal landscape formed by dune sand, Mueller evidently not only creates an increased harmony in the barely differentiated color scheme between strong red-brown tones, delicate green with a touch of yellow with the reflection of the water. Despite all the simplification in the representation of the body, the quick and the nervous account of the coast, the proportion remains the measure of Mueller’s compositions. "He lived from measure and number, from structure and inner content," as Werner Haftmann states about Otto Mueller.
BORROWED FROM LEHMBRUCK’S WORLD OF THOUGHT

In this connection with the academy teachings of the first decade of the 19th century, Otto Mueller's conceptual kinship and connection with a completely different role model shows: the sculptor Wilhelm Lehmbruck. The modeling of the body, similar to sculpting, and the gradual stretching of the limbs go back to the painter's intensive study of various works by the sculptor, which he encountered at exhibitions of the Secession in Berlin. Enough echoes of similarities can be seen in the paintings, but especially his graphic and lithographic works show how those figurative themes were borrowed from Lehmbruck's world - the bathing, the pensive, the ascending, the kneeling and the torso - which Mueller renders in a stricter order in his compositions. In “Drei Badende Mädchen” a staged juxtaposition in different postures is also revealed, always remaining in an elegant pose, but also silent and closed like painted sculptures. The quiet and withdrawn artist seeks his perhaps most central theme - the nude in nature - with great intensity to attain a representation of female bodies in perfect movement and grace with the simplest forms. A characteristic that Mueller and Lehmbruck share.

Otto Mueller's intensive examination of the classic subject of “bathers” or “people in the landscape” also brings Paul Cézanne to mind, who highlighted this subject as one of the central motifs in the art of the late 19th and early 20th centuries. In “Drei Badende Mädchen” (Three Bathing Girls), Mueller also deals with Cézannesque poses, with the simplification of various body gestures of a seated person, bending and standing in order to develop an immanent togetherness. The knowledge of Cézanne's “bathers” also had a great effect on the “Brücke” artists who worked on the coast of the Baltic Sea, the Moritzburg Lakes and the beaches of Fehmarn in the summers from 1908 until the First World War. The encounter with the painting of the French triggered a veritable flood of reception after seeing the Cézanne exhibitions at Paul Cassirer's art salon.

The encounter with Ernst Ludwig Kirchner and Erich Heckel in the spring of 1910 in Berlin on the occasion of a joint exhibition at the Galerie Macht not only marked the beginning of a close friendship of the two very different Brücke artists; it again exerted an extremely important, if not obviously visible, influence on the style of the artist, who at that point was 33 years old. For the first time, Otto Mueller submits works for the major annual exhibition of the Berlin Secession. The fact that artists who had broken with Impressionism and were close to Expressionism were taking part in these exhibitions caused unrest in the association which was headed by Max Liebermann and Paul Cassirer. The result was the break-up with the association of like-minded artists, after works by 27 artists had been ruled out by the jury in the run-up to the 20th annual exhibition. Under Max Pechstein's leadership, some of the rejected artists founded the “New Secession” and opened their first show on May 15, 1910 at the Berlin art salon of Maximilian Macht on Rankestrasse, not far from the Kaiser Wilhelm Memorial Church, with the title “Ausstellung von Werken Zurückgewiesener der Berliner Secession 1910” (Exhibition of works by those rejected by the Berlin Secession 1910). The artists of the "Brücke", Erich Heckel, Ernst Ludwig Kirchner, Pechstein, Karl Schmidt-Rottluff, and other artists, including Emil Nolde and Otto Mueller, were involved. “The first encounter with Otto Mueller's pictures happened in Berlin,” wrote Erich Heckel years later in a letter to Emmy Mueller, the artist's older sister, “in the exhibition of those rejected by the Berlin Secession in the spring of 1910, which took place at Galerie Macht, I was with him that same day in his studio on Mommsenstrasse. For each of us it was meaningful and at the most fertile moment, and it was a matter of course that from now on he would belong to the community of the Brücke." The artists of the "Brücke" spent the summer of 1911 in various places: Schmidt-Rottluff stayed in Dangast from May to October, Pechstein in Nida and on Hiddensee, Mueller with Heckel and Kirchner went to the Baltic Sea with their wives and partners to paint nudes, in late July Kirchner, Mueller and Maschka traveled to Mnicek in Bohemia, where they stayed until the beginning of August.
In the first days of August Kirchner and Mueller returned to Dresden, Heckel came from the Baltic Sea, and in August they went on a last visit together to the Moritzburg Lakes, that idyllic place that was so eminently important for the free painting of the Brücke. It was probably the first time that Otto Mueller stayed there for a longer period of time.

BATHERS ON THE BEACH

Kirchner's and Heckel's experiences during excursions with their models into nature, the way in which and at what intervals the artists moved the models in the lake landscape near Moritzburg, was immediately met with great interest by Mueller, who had worked on same subjects and accordingly reacted to his new artist friends while on summer vacation on Hiddensee in 1901 and on Fehmarn in 1908. Even in the years that the artists spend time together on the island of Fehmarn or on the Bay of Kiel - similarities can be found again and again, apart from the fact that Otto Mueller also depicted Heckel and Kircher in addition to the women traveling with them.
Bathers on the beach, naked bodies between reeds and tree leaves, for Mueller seemingly inexhaustible topics, from which he always knew to win yet another a variant, how he held on to a draft for a very long time, reapproaching it again and again, just to put a little more sensation into it. Again and again bodies that lag behind in their development, so that they often do not clearly reveal their gender. The present painting, whose historical title "Badende in Braun” (Bathers in Brown) so aptly describes the atmospheric dense tonality, comes from an important art collection. Until 1931 the work was part of the collection of Dr. Hans Heymann (1885 Königsberg – 1949 New York). The doctor of economics and philosophy, who founded Hausleben-Versicherungs-AG in Berlin in 1920, shared his passion for art with his wife Ella, a wealthy and excellent professional singer. Until the insurance company went bankrupt in 1931, the Heymanns had sufficient funds to build up a large and important art collection. They were primarily interested in the painter Max Pechstein, for purely personal reasons: Hans Heymann's brother Walther Heymann, who died in World War I in 1915, is known as a Pechstein researcher. But not only Pechstein inspired the Heymanns, two early paintings of the same format by Otto Mueller also found their way into the carefully selected collection - in addition to the work offered here, this also applies to its “counterpart”. In both cases we are dealing with nudes in nature, but with almost complementary colors and body perception. While the girls turn their backs and flanks almost repellently to the viewer in the nude picture, which is kept in cool green and blue tones, our present picture conveys an open passion. A primal, shimmering heat can be felt in the earthy brown tones; And last but not least, the wide open thighs of the sitting girl, which openly reveal the red, flaming vulva, send out clear erotic signals. The two Mueller paintings from the Heymann Collection can indeed be viewed as “counterparts” that depict the feminine in its everlasting duality: in a cool, soulful, remote inaccessibility on the one hand, and with a wild, primeval passion on the other. It is quite conceivable that Hans Heymann, who presented the two works together at the show in 1928 and also at the important “Memorial Exhibition” of 1931, also bought the pictures together. However, when and where this happened remains unclear. The only thing that is certain is that Heymann wanted to sell both pictures in 1931, the year his insurance company went bankrupt. While the blue-green nudes were given to Alfred Flechtheim on commission, the Silesian Museum of Fine Arts in Wroclaw obtained this brown-toned picture for 700 Reichsmarks. Erich Wiese, the then director , knew the artist who died in 1930 well - and also recognized the depth of the work. After all, it was he who organized aforementioned “memorial exhibition”; Wiese also began to create a catalog raisonné for Mueller, which was lost in the chaos of war. However, museum visitors in Wroclaw were not able to enjoy Mueller's arcadian-animalistic scenery for long. In 1937 our picture was confiscated by the National Socialists as "degenerate". However, the painting escaped a fate of destruction that befell so many masterpieces in these years: the art dealer Bernhard A. Böhmer from Güstrow took “Drei Badende Mädchen” on commission in 1939 and immediately left the picture to the Hamburg gallery Commeter, which had shown a first comprehensive "Brücke" exhibition as early as in 1912. It is not certain when the painting finally came into the possession of Erwin Petermann. This collector, however, is also one of the “big names” in the eventful history of the picture: even before the Second World War, Petermann contacted the Staatsgalerie Stuttgart, became head of the graphic collection in 1945 and even took over the management of the Staatsgalerie from 1962 to 1968. In 1970 he parted ways with "Drei Badende Mädchen" – and since 1973 the painting has been with its current owner. [MvL / AT]
More Information
+
Sell
Get a free appraisal for a similar object!
+
Register for
Otto Mueller
+
Buying from A-Z
+
Contact a specialist
+
Otto Mueller Biography
Share