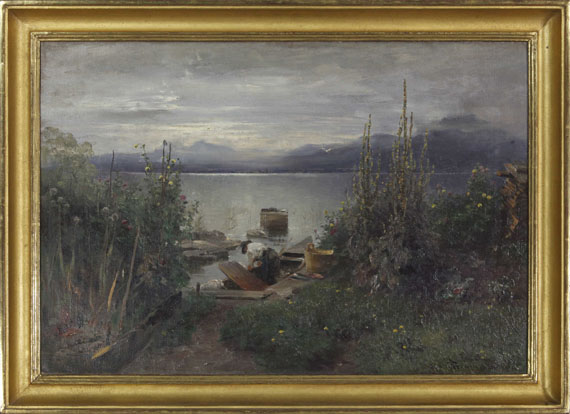 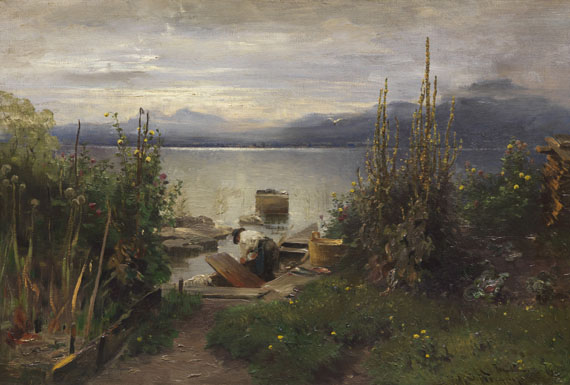 Restitution from Bavarian State Painting Collections Munich
Prof. Dr. Bernhard Maaz, general director of BStGS, on the painting's restitution: "Every restitution serves to raise awareness of former injustices, peoples‘ fates and often also of losses, expulsions and murders. This is impressively shown by the reconstruction of the biographies of the families Adelsberger and Isay as part of the provenance research carried out by our colleague Dr. Johannes Gramlich. The Bavarian State Painting Collections are happy to be able to return the painting by Joseph Wopfner to the community of heirs after Alfred Isay" .

We are grateful to the Bavarian State Painting Collections Munich for the kind support in cataloging this lot.

PROVENANCE: Collection Abraham Adelsberger (1863-1940), Nuremberg (until 1933).
Alfred Isay (1885-1948), Cologne/Amsterdam (obtained from the above in 1933 to safeguard a credit, until at least 1935, presumably until after 1940).
Adolf Weinmüller, Tegernsee (until 1942: Auction Weinmüller, March 26/27, 1942, as own commodity).
Heinrich Michaelis, Munich, on behalf of 'Reichsleiter' Martin Bormann (acquired for the NSDAP headquarters from the above in 1942, with the inventory number J 1132 and the number B 304/X on the reverse).
Altaussee, Depot (with the CCP number 7088).
Central Collecting Point, Munich (October 25, 1945 - June 10, 1949, with the Munich number 12190).
Bavarian prime minister (fiduciary safekeeping 1949-1952).
Treuhandverwaltung von Kulturgut beim Auswärtigen Amt der Bundesrepublik Deutschland (fiduciary safekeeping, 1952-1956).
Bavarian State Painting Collections, Munich (from confiscated NS ownership transfered to the state of Bavaria in 1956 - 2019).
Returned to the heirs after Alfred Isay from the Bavarian State Painting Collections (2019, handed over in 2021).

Along with Karl Raupp, Joseph Wopfner is a painter whose work is closely linked to the landscape and the people of the Chiemsee region. After he had completed his studies at the Munich Art Academy in 1872, he fell in love with the motif - which would shape most of his creation - during a summer stay on the picturesque island ‘Fraueninsel’ in the midst of the lake. Until a year before his death, he spent the summers on Fraueninsel, where over the time a group of artists, of which most but not all came from Munich, had formed an artist colony. Many of the works Wopfner made there show fishermen at work. Works in which he also put focus on the atmosphere of different weather conditions. Wopfner captured the landscape in the change of weather, daytime and season between a peaceful idyll and a churning drama. In this work Wopfner shows the fisherman peacefully engaged in his work, seemingly unobserved by the painter, who captures the scene in a loose and free brushwork. Framed by the luminous red and yellow blossoms of the evening primroses and the roses of the small cottage garden, the view opens up across the calm lake over to the mountain range in morning mist. Wopfner pays a particularly great deal of attention to the nature in summer bloom in the foreground, its nuanced shades of green, loosened up by the flowers‘ fresh and gaudy accentuation, form an idyllic harmony with the blue-silver transparency of lake, mountains and the sky. [KT]
The painting with its peaceful and Arcadian appeal looks back on an eventful history, because it used to be part of the significant art collection of the Nuremberg toy manufacturer and art collector Abraham Adelsberger (1863-1940). The fate of the collection has not been completely clarified up until today.
As of the late 1920s, Adelsberger, just as many others, was severely affected by the global economic crisis, and was forced to take out loans, in order to keep his business alive. For this purpose he provided his art collection as security. In 1933, Adelsberger gave the Wopfner painting to his son-in-law Alfred Isay (1885-1948) to secure such a loan. The same year Isay had to flee with his family, because of his Jewish background. He left his hometown Cologne and took his family to the allegedly safe Amsterdam. The painting his father-in-law had given him was part of his baggage.
Meanwhile repressions against the Adelsberger family worsened. The toy factory had to be shut down and Abraham Adelsberger and his wife had no other option than to flee as well. In 1939, they were able to make it to their daughter Sophie and their son-in-law Alfred Isay in Amsterdam.
Abraham Adelsberger passed away only a few weeks after the Germans had invaded and occupied the Netherlands in May 1940, which meant he lived to see their exile becoming a danger for him and his family, too. The company that Alfred Isay had established was Arianized in 1942. In February 1943, the Isay-Adelberger family was forced to gather at the theater Hollandsche Schouwburg, at that time a collecting point for planned deportations to concentration camps, but was luckily released. However, only half a year later, they were deported to the Westerbork concentration camp. It was only through the connections of the business partner Ludwig Mengel, and probably with the help of a lot of money, that Alfred Isay and his family were freed again. They endured the time until the end of the Nazi dictatorship submerged and hiding in private homes.
It is obvious that the painting was lost in the light of the persecution pressure the Nazis exerted on the family. The painting resurfaced again in 1942 - in Germany. It was auctioned by the auction house Adolf Weinmüller as its own commodity. It can be assumed that Kajetan Mühlmann also played a role in this context, as it was his office that confiscated property of Jews who had fled to the Netherlands. In many cases it was auctioned through the auction house Adolf Weinmüller.
In the auction the painting was bought by Heinrich Michaelis on behalf of Martin Bormann. In those years the "Reichsleiter" compiled artworks for the NSDAP headquarters. Wopfner's painting was supposedly acquired for the residence on Obersalzberg. In exchange for the considerable amount of 25,000 Reichsmark the picture went into the hands of the NSDAP - a spectacular price not only in those days. However, the picture apparently never made it on the wall. American forces discovered the painting at ‘Depot Altaussee‘, where it had been taken for protection from air raid damage. At that point it was not possible to identify a problematic origin, so the picture eventually became property of the Bavarian State Painting Collections in 1956. Through extensive research under Dr. Johannes Gramlich, the Bavarian State Painting Collections were able to reconstruct the origin of the work. In 2019 the painting was returned to the heirs of Alfred Isay - and its eventful story finally came to a good ending. [SvDL]
More Information
+
Sell
Get a free appraisal for a similar object!
+
Register for
Joseph Wopfner
+
Buying from A-Z
+
Contact a specialist
+
Joseph Wopfner Biography
Share