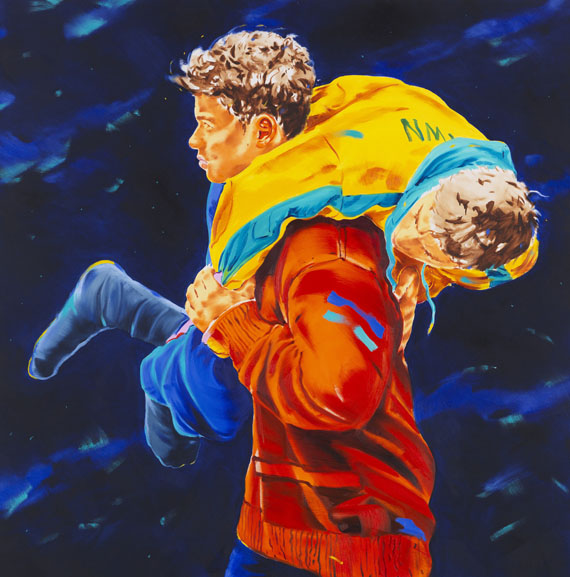 • Bright and radiant work in the artist's characteristic style.
• Bisky is represented by the renowned König Galerie, Berlin/London/Tokyo.
• His works are in many important international museums, among them the Museum of Modern Art, New York, and the Museum Ludwig, Cologne.

"Even if I painted just boys until the end of my life and nothing else at all, it would not compensate for the 'Boy meets Girl' stories I have been bombarded with for years."
Norbert Bisky, 2016, quoted after: www.collectorsagenda.com/de/in-the-studio/norbert-bisky

Norbert Bisky from Leipzig grew up in the GDR, studied German and art history for a short time at the Freie Kunstschule in Berlin and then at the Berlin University of Visual Arts as a master student of Georg Baselitz. Today Bisky is considered one of the most important contemporary German artists of figurative painting. At the beginning of his career, the imagery of the clear and brightly colored works examined the art of Socialist Realism and the heroic images of the propaganda art he was confronted with in his youth. In his later works, Bisky was able to distance himself from his own background and began to put increasing focus – with today's media images and the aesthetics of advertising in mind - on the formal aspects of painting.

During his stay abroad in Madrid, Bisky came into contact with the paintings of the Old Masters, in particular by Jusepe de Ribera (1591-1652) or the paintings of Francisco de Goya (1746-1828). At second glance, the motif of the work offered here may be reminiscent of Christ carrying the cross or depictions of the legend of St. Christopher. In numerous paintings from European art history – e. g. in the works of Hieronymus Bosch, Caravaggio, Lucas Cranach, El Greco, Domenico Ghirlandaio, Lorenzo Lotto, Quentin Matsys, Andrea Solario or Titian, they are depicted in red robes.
Bisky himself confirms: "There has always [..] been a reference to art history. In the past, I conveyed these scenes in a different visualization - in light, pastel tones. But I increasingly felt that this would obstruct the view on the content, and at some point I was just done with these types of pictures. Then I took other colors and increased the contrasts in my work "(Norbert Bisky, quoted from: www.collectorsagenda.com/de/in-the-studio / norbert-bisky).
With the motif and the focus on movement, anatomy, materiality and drapery, the artist refers to the masterpieces of his art-historical ancestors, but with the help of his characteristic, very individual imagery, he creates a work of great topicality and impressive spatial presence as well as extremely subtly scattered moments of irritation. The supposedly heroic idyll of the young man striding bravely, carrying his friend on his shoulders with a determined, forward-looking, focused gaze, the helpless situation of the shouldered man, his wrinkled forehead, the missing shoes and the tight grip of his friend open one up deeper narrative level and raise questions.

With his powerful, expressive works, the artist is considered one of the most important painters of post-modern figuration (Handelsblatt Magazin 04/2019). In 2014, the Kunsthalle Rostock honored him with a comprehensive retrospective of his first fifteen years of creativity. The artist's work can be seen in the large solo exhibition "Norbert Bisky. Disinfotainment" at G2 Kunsthalle in Leipzig until January 16, 2022. [CH]
More Information
+
Sell
Get a free appraisal for a similar object!
+
Register for
Norbert Bisky
+
Buying from A-Z
+
Contact a specialist
+
Norbert Bisky Biography
Share