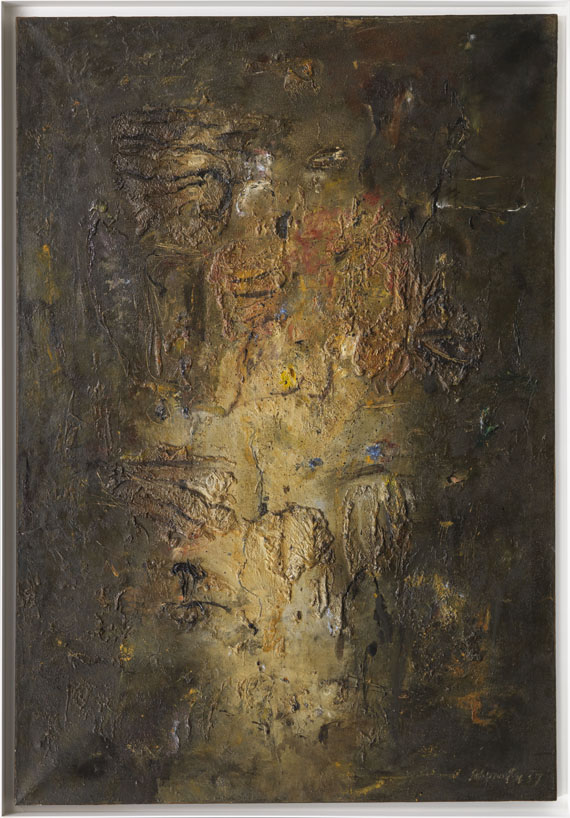 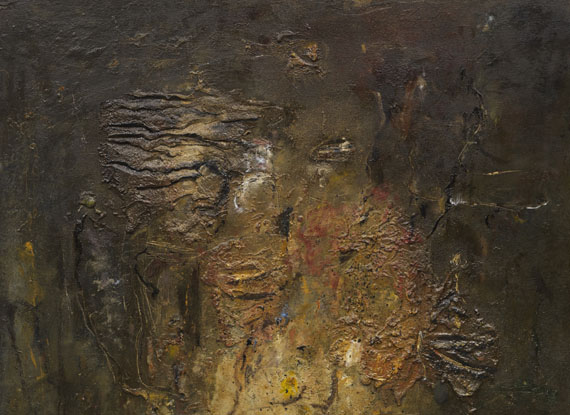 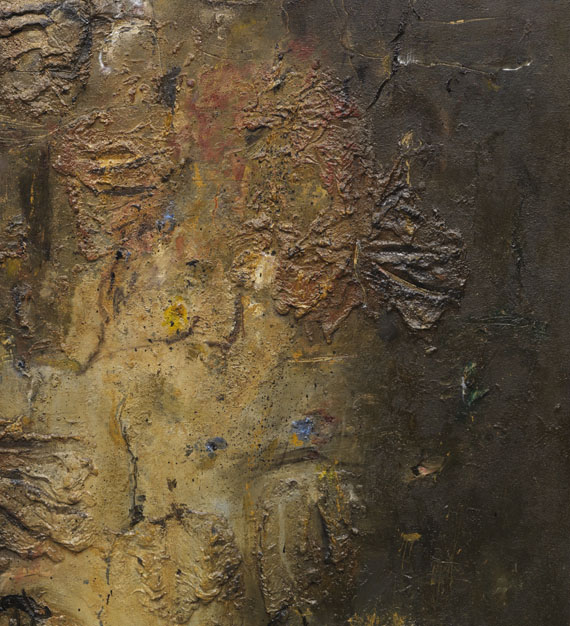 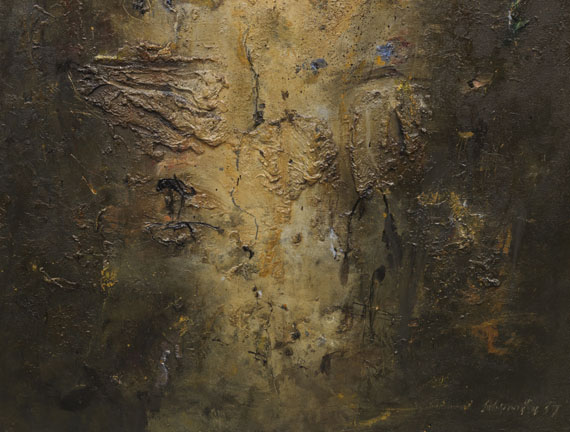 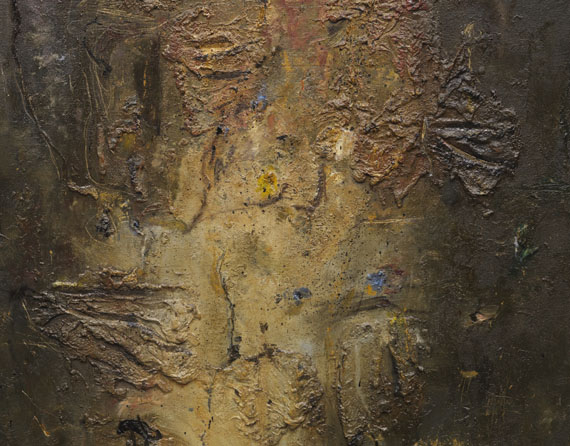 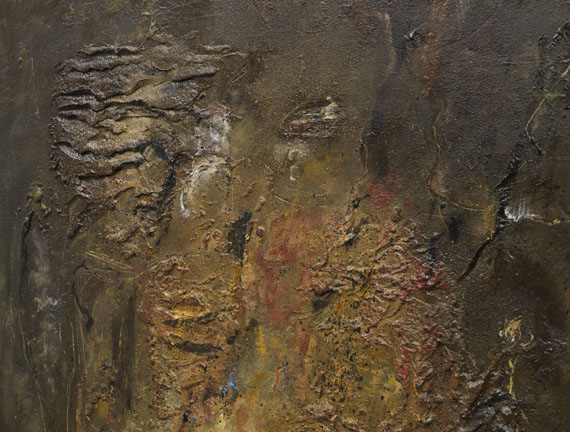 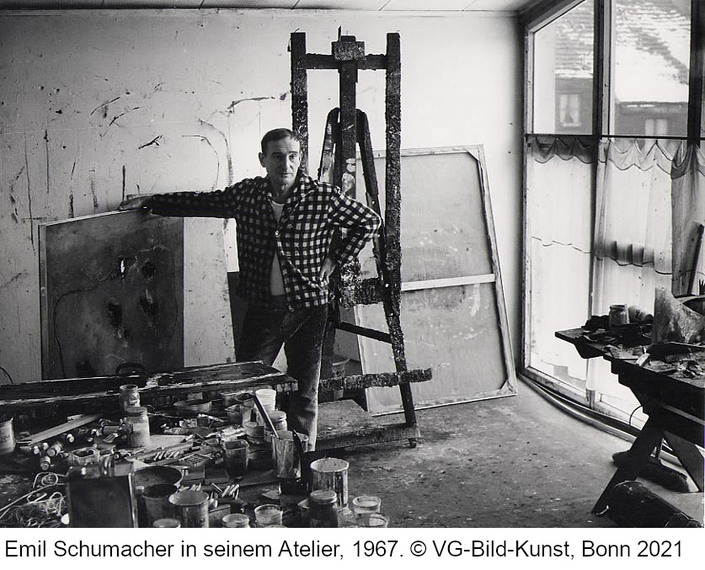 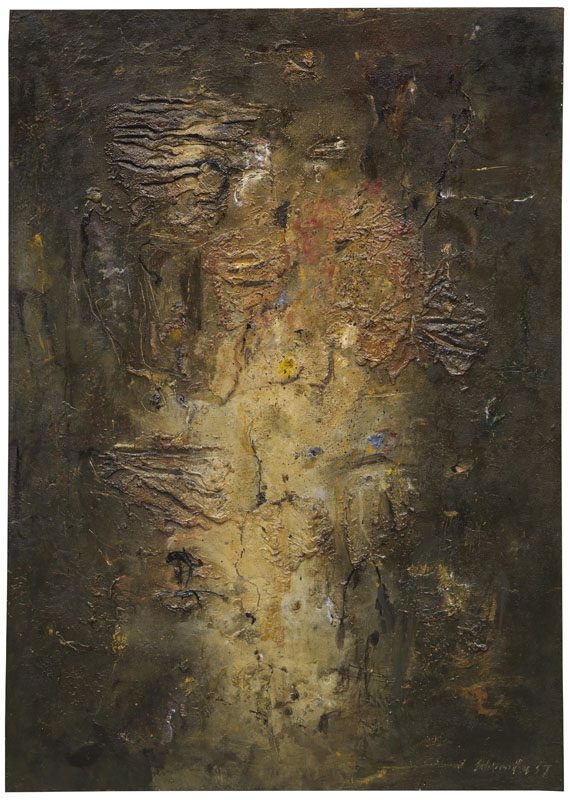 • Made the same year as the important documenta picture "Für Berlin".
• Impressive large-size work.
• In 1958 Schumacher's works were on display in the German pavilion at the Venice Biennial.
• In 1997 part of the retrospective at Karl Ernst Osthaus-Museum, Hagen
• Works by the artist from the 1950s are in many important museums, like the Metropolitan Museum of Art in New York, the Kunsthalle Hamburg and the Kunsthalle Karlsruhe..

The work is registered with the inventory number "0/345" in Dr. Ulrich Schumacher's index at the Emil Schumacher Foundation, Hagen.

LITERATURE: Kunsthaus Lempertz, Cologne, 816th auction, Contemporary Art, December 5, 2001, lot 1055 (with color illu.).
"In order to improve the texture of the paint as matter, I makes them myself from pigment powder and binding agent. [.] I love its impasto character, I have to touch it and fell it. It is exciting when it is really thick and grainy. It has to form a [.] crannied mass that I can scratch open. "
Emil Schumacher, quoted after: Ex. cat. Emil Schumacher. Retrospective, Haus der Kunst, Munich 1998, p. 130.

Emil Schumacher is one of the most important representatives of German Informalism. The year the work offered here was created, the artist was at the beginning of his international breakthrough: only a little later, his work was exhibited in the German Pavilion at the 1958 Venice Biennial. That year he did not only receive the renowned Guggenheim Award (National Section) in New York, but was also appointed to teach at the University of Fine Arts in Hamburg. In 1959, 1964 and 1977 he showed works at documenta II, III and 6. In 1962 he won the "Premio Cardazzo" at the XXXI. Venice Biennial . Today the artist's works are in numerous important museum collections, among them the Metropolitan Museum of Art in New York, the Museum of Modern Art Ludwig Foundation in Vienna, the Städel Museum in Frankfurt am Main and the Museum Folkwang in Essen.

Around 1950 the young Emil Schumacher turned to non-representational painting for the first time. His first trip abroad after the war took him to Paris in 1951, which had an impact on his work. Fittingly, the French art critic Michel Tapié coined the new term "art informel" on the occasion of an exhibition in a Paris gallery that same year. From then on, Schumacher's work was also characterized by form and line freed from the motif, by color and materiality. The pictures contain a spontaneous, impulsive painterly expression, which can also be found in the art of French Informalism and Tachism, as well as in Art Brut and American Abstract Expressionism.
However, Schumacher's work is characterized by a very special, extraordinary handling of the material, which distinguishes it from the works of his artist colleagues such as Willi Baumeister, Hans Hartung or Fritz Winter. He often mixed sand with the color and employed unusual materials. "In a traditional sense we understand paint and its application as the pictorial matter, however, around the mid-1950s a different concept emerged, one that was much more material, more substantial: a mass of color and all sorts possible ingredients, a paste of an entirely different materiality than that of the colors commonly used by painters. " (Emil Schumcher, quoted from: Werner Schmalenbach, Emil Schumacher, Cologne 1981, p. 68). These material experiments were taken to extremes between 1956 and 1959 with the "tactile objects", which Schumacher no longer produces on canvas, but from objects and materials that by then had not been used for pictures, like scraps of fabric, fiberboard, wooden panels, crumpled paper and lead. The work presented here was also created during this experimental creative phase: Schumacher also used the materiality tried and tested in the tactile objects in later works. Accordingly, paintings from these years, such as the work offered here, testify to an extraordinary, haptically appealing, almost sculptural surface quality. The surface of "Irisis" shows scratches and wrinkles, billowing layers of paint, impasto fillings, boldly distributed colors. The color formations become 'matter' and condense into a composition that seems both random and inevitable.

In the work offered here, the artist lets the dark, heavy material recede to the edge of the picture and create a bright opposite pole with finely nuanced color accents that appears to shine from the inside and push the dark to the side. "Irisis" was created the same year as the important documenta picture "Für Berlin" and, owing to its painstakingly processed, three-dimensional surface structure, the finely modulated chromatics and the atmospheric light-dark contrast, it can be considered a particularly successful work in the artist‘s oeuvre from these important creative years. [CH]
More Information
+
Bidding Options
+
Bid by telephon / written
+
Contact a specialist
+
Buying from A-Z
+
Preview & Auction Procedure
+
Catalogue Order
+
Register for
Emil Schumacher
+
Emil Schumacher Biography
+
Sell
Get a free appraisal for a similar object!
Share 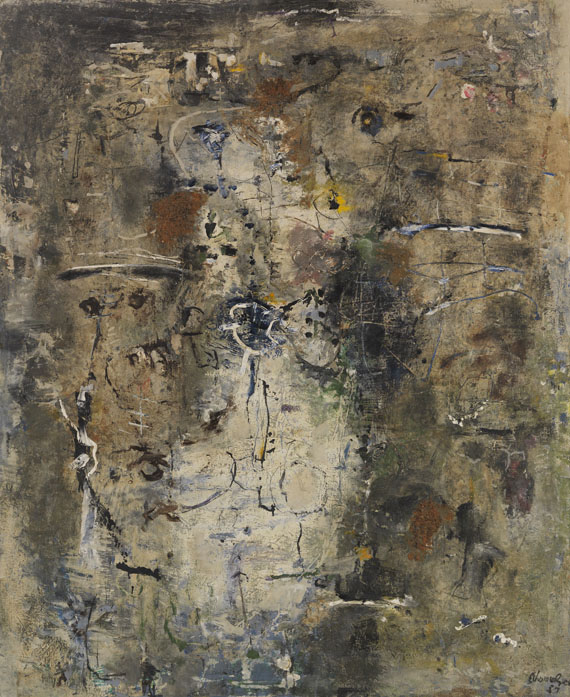 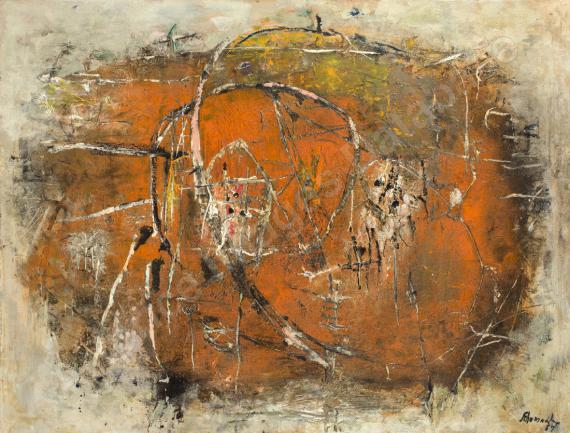 Resale right apportionment:
In accordance with §26 of German Copyright Act, a droit de suite charge of 2.4% including VAT is levied for original artworks and photographs for the compensation of the statutory right of resale.
Emil Schumacher - lots sold by Ketterer Kunst
+
all