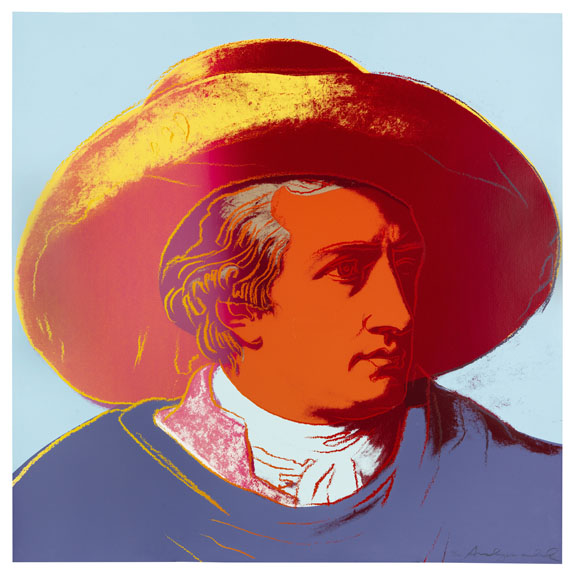 The eyes tired, the rucksack on the back, the jacket does not fit well - apparently one of the numerous tourists who have their photos taken in front of Tischbein's famous painting "Goethe in der römischen Campagna". In 1981, the photographer Barbara Klemm captured Andy Warhol in front of the work that had served him as inspiration for his portrait of the German poet a year earlier. A portrait commission from the publisher Siegfried Unseld took the pop artist to Frankfurt am Main in 1980. Together with his client, Warhol visited the Städel Museum, where Unseld suggested to creatie a variation of Tischbein's painting. Based on a photo, the "court painter of the 70s", as art historian Robert Rosenblum calls Warhol, (cf. Robert Rosenblum, Andy Warhol: The Court Painter of the Seventies, in: Exhib. Cat. Andy Warhol, portraits, Museum of Contemporary Art, Sydney 1993; Anthony d'Offay Gallery, London 1994, Munich 1993), transforms the portrait of Goethe into a trendy modernist portrait. He adds graphic elements to his screen printing process, increasing the motif by a painterly surface structure and the unmistakable artistic signature. The concentration on the face with the accompanying oversizing, stages Goethe's face in a striking way and thus follows Tischbein's original intention to pay particular attention to the face. At the time, he wrote in a letter to Johann Caspar Lavater: "I want to draw his face very accurately and true. You can hardly see a happier and more expressive head [sic]" (quoted from: Jonas Fränkel (ed.), Goethes Briefe an Charlotte von Stein, vol. 5: commentary / register, Berlin 1962, pp. 199f.). [CE / SM]
More Information
+
Sell
Get a free appraisal for a similar object!
+
Register for
Andy Warhol
+
Buying from A-Z
+
Contact a specialist
+
Andy Warhol Biography
Share