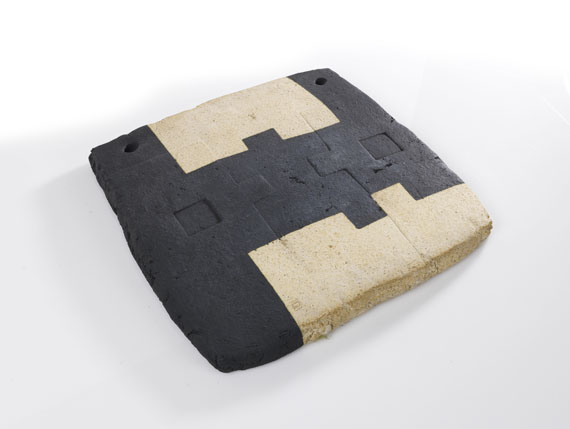 • Unique object from the work group "Óxidos"
• Featured in the grand retrospective exhibition at Museo Nacional Centro de Arte Reina Sofía, Madrid and the Museo Guggenheim, Bilbao in 1998/99
• Eduardo Chillida is considered one of the most important Spanish sculptors of the 20th century
• In 1958 the Venice Biennial honored the artist with the Grand Prize For Sculpting, in 1990 he was also honored with a special exhibition at the XLIV Biennial.

We are grateful to the Estate of Eduardo Chillida and Hauser & Wirth for the kind support in cataloging this lot.

LITERATURE: Yves Bonnefoy, Chillida, Galerie Lelong, Paris 1990, cat. no. 21, with color illu. on p. 29.
"For Chillida, to sculpt is to impose oneself on the given material (to put oneself in its being, not to superimpose oneself) and without losing its nature as material, to give it life, a breath, a being on a new level, an artistic level.“
Kosme de Barañano, in: Chillida 1948-1998, Madrid 2000, p. 42.

When Eduardo Chillida came into contact with clay for the first time at the beginning of his career as a sculptor, he did not find much to gain from the smooth and soft material. Instead, he turned to iron, which is more traditional in his homeland in the Basque Country, and with his expansive sculptures he has become one of the most successful sculptors of the 20th century. Only in the 1970s, when the then established artist saw the harder fireproof fire clay in the studio of the Fondation Maeght in southern France, he suddenly found a completely new approach to the formerly unwelcome clay. He remembers: "I rushed down, touched the clay, took a block in my hands and immediately realized that I could work with it." (Eduardo Chillida, quoted from: Sigrid Barten, Skulpturen aus Ton, Zurich 1996, p. 8th).
In collaboration with the German ceramist Hans Spinner, he soon created his first clay sculptures, which, with more than 500 works, became an integral part of his work and can be divided into two main groups: the "Lurras" and the "Óxidos", which also includes this work here. With their black painting of copper oxide, the memorable forms of which range between abstract constructions and suggested spaces, the compact blocks of clay surprisingly show a close connection to Chillida's filigree works on paper and prints. The mostly geometric surfaces extend over the blocks of clay in ever new variations and, in the artist's eyes, function as a way to embrace the material. The contrast of light and dark, the contrast between apparent emptiness and over-representation make up the special attraction of the "Óxidos". Despite its serial character, each work is unique, which is not a contradiction for Chillida's work, which had a close connection to the sea. Because similar to the waves that hit the coast, they remain "[..] always the same and yet always different" (Eduardo Chillida, quoted from: Sigrid Barten, Skulpturen aus Ton, Zurich 1996, p. 9). [AR]
More Information
+
Sell
Get a free appraisal for a similar object!
+
Register for
Eduardo Chillida
+
Buying from A-Z
+
Contact a specialist
+
Eduardo Chillida Biography
Share