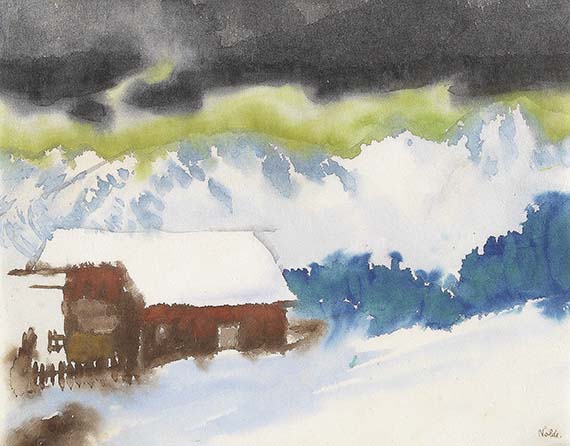 • One of the rare watercolors with a mountain motif.
• Nolde is the first watercolorist who depicted the mountainside at eye level with the peaks.
• Particularly dramatic celestial atmosphere.

With a photo expertise from Prof. Dr. Manfred Reuther, former director of the Ada and Emil Nolde Foundation, Seebüll, dated November 8, 2007 (in copy).

LITERATURE: Ketterer Kunst, Munich, December 5, 2007, lot 188.
"I spend most of my free time, both in thought as in reality, with my friends the mountains."
Emil Nolde, quoted from Emil Nolde, Das eigene Leben, p. 186

The northern German artist Emil Nolde is known as a painter of the roaring seas, the vast marshland and the bright flowers. This watercolor "Verschneite Alpenlandschaft mit Almhütte“ (Snow-covered Alpine landscape with alpine hut) shows a relatively unknown side of the artist: his enthusiasm for Switzerland and its imposing mountain landscape. Works from Nolde's time in St. Gallen and Davos, Switzerland, rarely find their way onto the art market, making the present work a rarity. Emil Nolde's love for Switzerland began early on. In 1892 he came to the alpine country for the first time, and became a teacher for commercial drawing at the industrial and commercial museum in St. Gallen. The beautiful nature and the leisure opportunities in the mountains inspired the young man. His favorite pastime was climbing in the mountains. As a member of the Swiss Alpine Club SAC, Nolde explored the mountain landscape on many climbing tours and conquered peaks of up to 4000 meters, the ascent of the Matterhorn would remain his peak performance. He himself described his impressions as follows: "You can still find nature here in its original form, unaffected and powerful. The snow mountains proudly strive up to the sky." His love for the mountains stayed lifelong, he kept coming back to Switzerland, be it to visit his close friend Hans Fehr in St. Gallen, often for health reasons, or for honeymoon. He took both his wives, Jolanthe in 1924 and Ada in 1948, to Switzerland. Between 1930 and 1941, Nolde spent several weeks in the Swiss mountains on numerous occasions. The stays always encouraged him to make the incredible beauty of the Alps tangible. The mountain watercolors were usually created plein-air directly in front of the motif. They tell of the imposing backdrops that Nolde captured on paper in the usual indulgent manner. In this sheet Nolde unfolds his view of the white splendor of the snow surfaces in front of a dark, almost ominous sky that besets the peaceful scene. As in the seascapes, the sky plays the decisive role in the composition. The high technical mastery and the poised handling of the topic in the concentration on a few, but all the more effective effects, allow us to participate in a landscape experience that, whether in the mountains or on the sea, could only be created by Nolde. [SM]
More Information
+
Sell
Get a free appraisal for a similar object!
+
Register for
Emil Nolde
+
Buying from A-Z
+
Contact a specialist
+
Emil Nolde Biography
Share