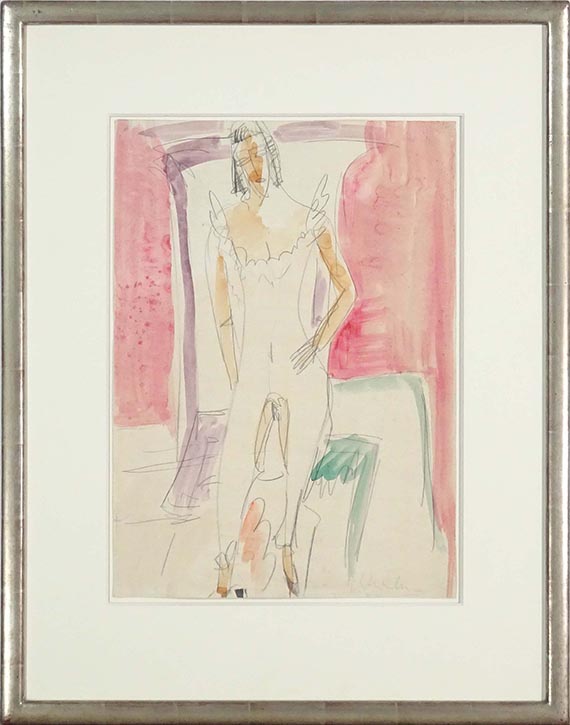 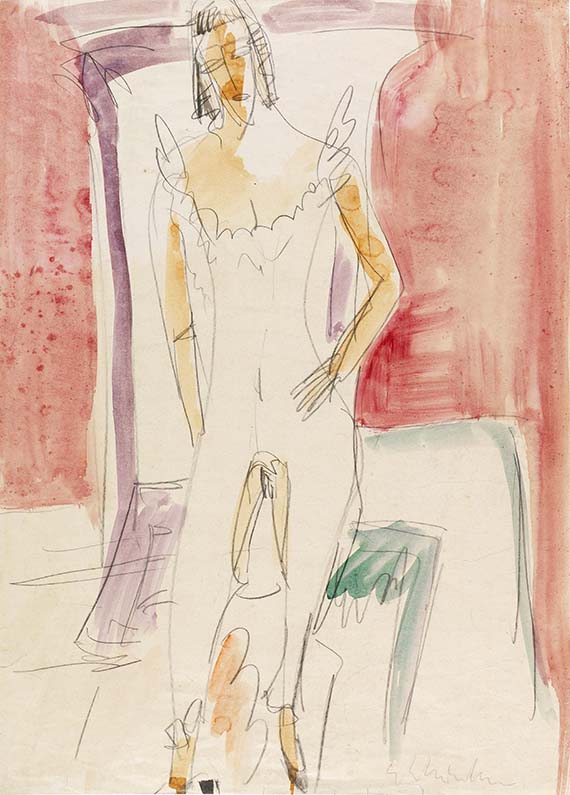 • Large-size depiction of a scene from the artist's private environment.
• From the sought-after Berlin period: 1913 was the last year of the artist group "Brücke".
• Through the narrow image space and the immediacy of the frontal perspective, Kirchner put the female figure at the center of the bold and provocative depiction.

After the formative "Brücke" years in Dresden, E. L. Kirchner followed his artist colleagues Hermann Max Pechstein and Otto Mueller to the metropolis Berlin in 1911. Around 1900, the city had not only risen to become one of the most exciting cultural centers, but was also the fastest growing place in Europe. After the turn of the century, life was raging there; department stores, bars, cabarets, and dance halls were built overnight. City dwellers in search of amusement found satisfaction there, while Kirchner found a large variety of motifs for his works. The simultaneity of glamour and misery, of poverty, unemployment and prostitution, of modernity, upheaval and glamorous prosperity, as well as the fast pace of life, the hustle and bustle and the diverse crowd of people living in a confined space overwhelmed the artist and inspired him so that he eventually attained a more mature style, the so-called "Berlin style". Works from these years are among the most distinguished accomplishments of his artistic oeuvre.
In 1912, the artist met the sisters Erna and Gerda Schilling in one of the new dance halls. They came from humble backgrounds, both performed as nightclub dancers and probably also dabbled in prostitution for a while. In the years that followed, they were the artist's favorite models, and Erna, the younger of the two sisters, became Kirchner's lifelong confidant and companion. She presumably also served Kirchner as model for the present drawing with watercolor, which she fills from the top to the bottom of the sheet, clad only in underwear and in a confident pose. With this piquant depiction of figures in his Berlin studio, Kirchner created an image between emancipated permissiveness and intimacy, between bohemianism and down-to-earthness, in which the Wilhelminian Period already seems to have been overcome and the zeitgeist of a new era seems to prevail. [CH]
More Information
+
Sell
Get a free appraisal for a similar object!
+
Register for
Ernst Ludwig Kirchner
+
Buying from A-Z
+
Contact a specialist
+
Ernst Ludwig Kirchner Biography
Share