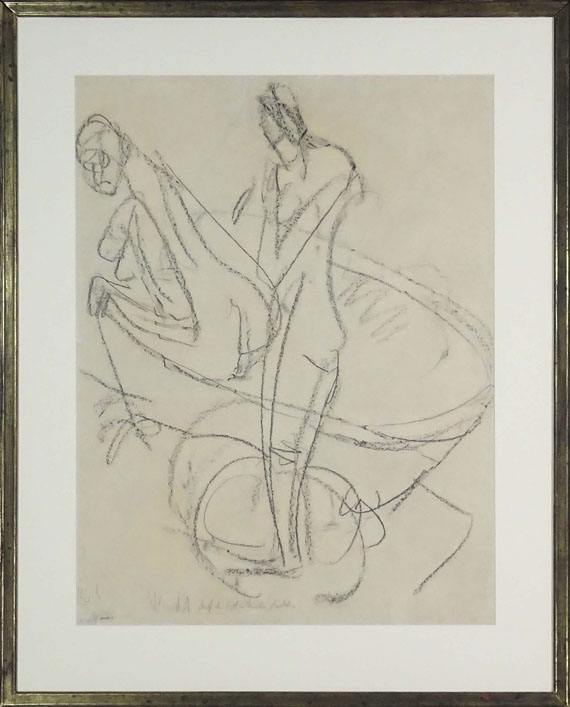 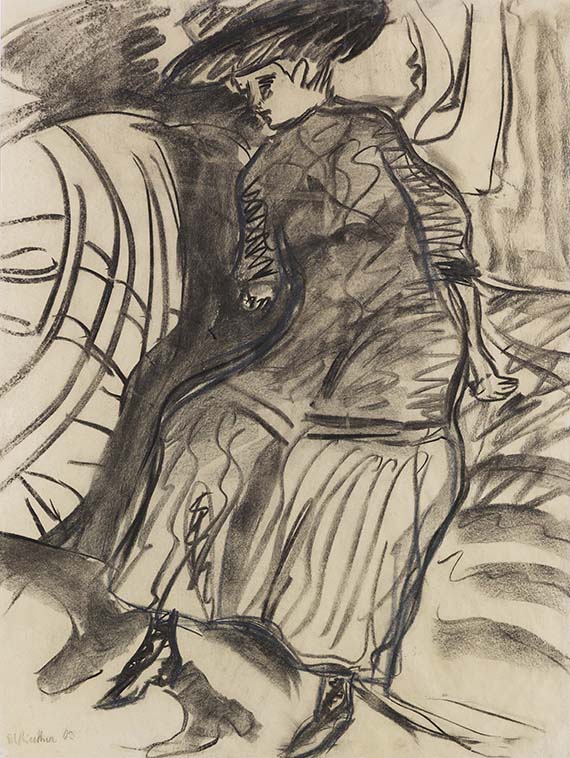 • One of the few large-size drawings in the oeuvre of E. L. Kirchner.
• Never before has a drawing by Kirhcner with such an impressive size been offered on the international auction market (source: artprice.com).
• Particularly well-executed depiction with a striking, painting-like effect.
• Painted on both sides: The reverse side shows the preliminary drawing for the center panel of the impressive triptych "Badende Frauen" (1915/1925).

Kirchner's drawings and paintings can be mapped to a certain location, for example a scene like this, in his living room and studio in Dresden, Berlin or later in Davos with all the furnishings. It is the same with the still lifes, landscapes and street paintings. And most of the time, the acting people can be named, or experiences were relived, which took place directly on the streets, in the vaudeville shows of Berlin and find their magnificent execution in the studio with the help of models, his friends and roommates. An actual situation from his own life is reproduced emphatically. Kirchner's works on paper show impatience, they appear torn, but at the same time a line, an arc connects the motif again. Kirchner's works on paper are eruptive - an eruption of expression, and they are erotic. They show hurt and they show sadness, they show sensitivity, they embody a lot of affection. The works on paper reflect Kirchner's life and the places where he lived excessively.

One of these places, or rather a stage for Kirchner's work, is his first modest studio in Dresden: "At that time we lived on Berliner Strasse in Dresden. Heckel lived with his parents, I in a shop that Heckel and Schmidt Rottluff had originally rented as a storage for the Brücke stuff, and which I later rented as a […] place to live, sleep and work, since I no longer received any money from my parents and had to suffer terribly because I was clumsy in the way I kept my things in order, and I didn't know any artists other than our Brücke people and other poor people," Kirchner recalled years later in his diary (Kirchner, Davoser Tagebuch, ed. by Lothar Grisebach, Ostfildern 1997, p. 64). He decorated his studio, a shop at Berliner Strasse 60, with batik curtains and screens depicting "barbaric" lovers, built pieces of furniture, and carved crockery and accessories. They always form a decorative background for studio scenes. At that time he also met Hans Frisch, five years younger than Ernst Ludwig Kirchner and a childhood friend since school in Chemnitz. Fricsh worked at the Dresden Museum of Ethnology. He was a young man with a vast range of interests, he painted with the "Brücke" artists, wrote poetry and later became a passive member of the "KG Brücke". Kirchner also knew his sister Emy from their time in school, she was a year older than him and later became photographer Emmy Leonie Frisch and wife of Karl Schmidt-Rottluff, known as Emy. After the first episodes of friendship with model friends Line and Isabella, Emy accompanied Kirchner not only as a model, but also as a partner. Depictions of her can be found in the first sketchbooks, and also here on this extraordinarily large sheet of paper (100 cm x 70 cm). Kirchner's line in this drawing is animated, almost excited. With short, broad, almost clearly defined contours, he lets the bed appear as a backdrop on which we find the model half sitting, half lying. Emy seems to have just entered Kirchner's studio when Kirchner lunges at her with paper and black chalk in order to capture her in a long dress, still in a coat and a wide hat, with quick strokes and a few surfaces that create atmosphere. A spontaneous situation that Kirchner always tried to provoke. Everything static, everything academic was repugnant to him. [MvL]
More Information
+
Sell
Get a free appraisal for a similar object!
+
Register for
Ernst Ludwig Kirchner
+
Buying from A-Z
+
Contact a specialist
+
Ernst Ludwig Kirchner Biography
Share