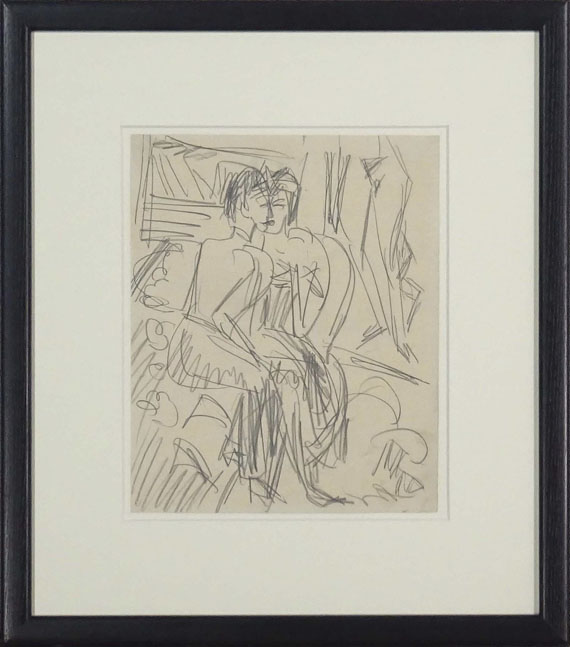 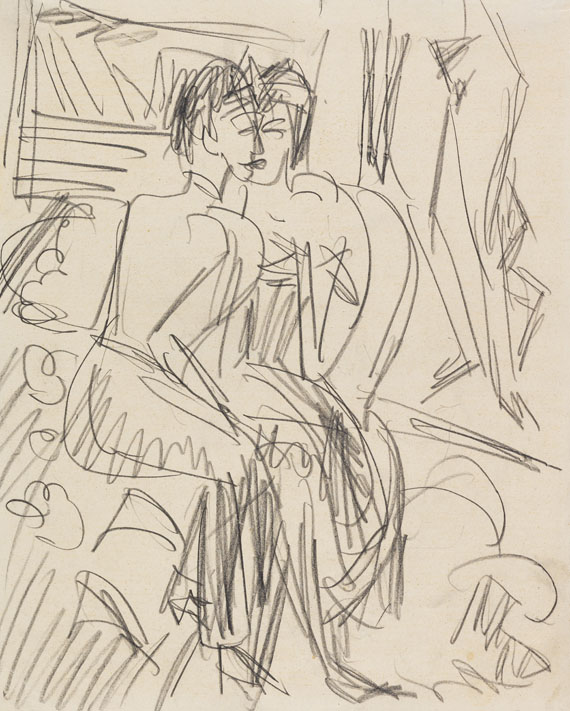 • Important drawing that unites all three muses of Kirchner: Erna and Gerda and Dodo in the painting "Stehender Akt mit Hut" in background.
• Particularly detailed sketch with an ingenious image section.
• The year this work was made Kirchner met the sisters Erna and Gerda Schilling, who would become his preferred models in the following years.
• Painted on both sides: Verso with a study of a seated nude with two indistinct figures.

In October 1911, Ernst Ludwig Kirchner moved to Berlin, following the "Brücke" artists Heckel and Schmidt-Rottluff to the metropolis. Kirchner lived on Durlacher Strasse 14 in the Wilmersdorf district, in the same house where Max Pechstein has lived for a long time. The first Berlin drawings, paintings and prints reveal a change in motif: Kirchner seems to be walking around the city restlessly and intensively deals with the themes that this place has to offer: theatres, bars, cafés, dance, brothels, cocottes on the street. It was probably not until May 1912 that Kirchner met the four year younger Erna Schilling. Like her sister Gerda, she performed as a dancer in a nightclub. Kirchner told Erich Heckel how the contact came about. "We wanted to go to Fehmarn together and were looking for another girl that we wanted to take with us besides Sidi [Heckel's girlfriend]. I found a little dancer who performed in the same club as Sidi." (Kirchner in: Davoser Tagebuch, edited by Lothar Grisebach, Ostfildern 1997, p. 97) And Erna had an older sister, Gerda, who also made a living as a dancer. Kirchner was attracted to both of them, but he developed a relationship with the twenty-eight-year-old Erna, which lasted until his death in 1938 in Davos. In the years before the First World War, the two sisters enlivened Kirchner's motifs in many ways, they were his models in the most diverse roles and enlivened the scenes the artist drew, painted or immortalized in graphic works. So Kirchner approached the two sisters, sitting close together on a bed in his studio, in this drawing. The ingenious thing about this drawing is perhaps the striking view of the faces of the two sisters, which Kirchner seems to unite into one by letting his lips touch them, forming a common bridge of the nose and only highlighting the right and left eye. What appears to be shaped like a mask stands as a symbol for a close relationship between the siblings. This also becomes obvious in other works in which the two play a role. However, who is Erna and who is Gerda? This remains largely a secret here. Later, Gerda became largely recognizable by a special hairdo with snails rolled up over her ears. And in contrast to Erna, she also has a more voluptuous, sensually soft mouth, as can be clearly seen in the painting "Zwei Frauen am Waschbecken" created a year later. Indicated in the background is the lower half of the large-format painting "Akt mit Hut", which shows Kirchner's then lover Dodo (Doris Grosse) in front of the lavish textiles in the Dresden studio. But back to the models Erna and Gerda, who vehemently invaded Kirchner's life and about whom Kirchner reflected: "The beautiful, architecturally constructed, strict bodies of these two girls replaced the soft Saxon bodies. In thousands of drawings, graphics and pictures, these bodies shaped my sense of beauty and helped me craft the most beautiful women of our time." (Kirchner, quoted from: Lucius Grisebach, Ernst Ludwig Kirchner, Cologne 1995, p. 86) [MvL]
More Information
+
Sell
Get a free appraisal for a similar object!
+
Register for
Ernst Ludwig Kirchner
+
Buying from A-Z
+
Contact a specialist
+
Ernst Ludwig Kirchner Biography
Share