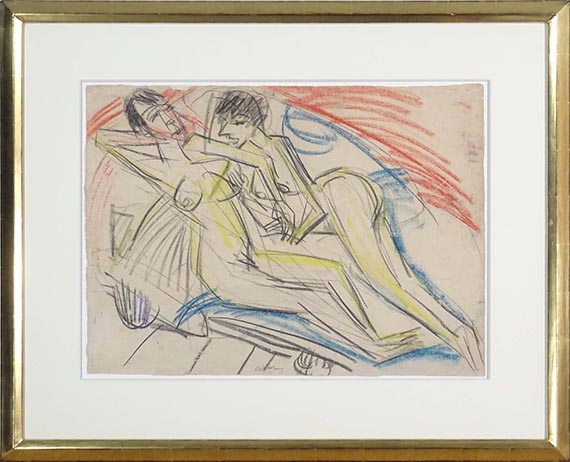 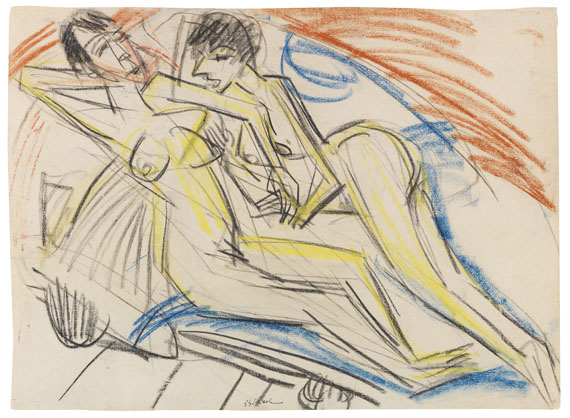 Just as it used to be the case in the early "Brücke" years in Dresden, Ernst Ludwig Kirchner's studio in Berlin would also be one of the most important places for his artistic creation. In addition to regular excursions into nature, in Dresden to the Moritzburg Ponds and now preferably to the remote beaches of the Baltic Sea, his abundance of ideas, his creative drive and his progressive thinking culminated in his studios in Berlin Wilmersdorf and later in Berlin Steglitz. yielding what would be the artistic highlights of his entire œuvre. While the young "Brücke" artists initially devoted themselves to the quick sketches of the so-called "Quarter Hour Nudes," in which the models changed their pose every 15 minutes, the Berlin years saw more mature, elaborate, though no less dynamic drawings in which Kirchner captured the posture, anatomy, and essence of the sitters with bold, self-assured strokes.

In the pulsating metropolis of Berlin, Kirchner had no shortage of motifs and models. Numerous bars, dance halls and cabarets made the search for female (nude) models easy, and he also found numerous suitable young women in his wider circle of friends. In 1912, the artist met the sisters Erna and Gerda Schilling at a nightclub. In the following years they were the artist's favorite models and Erna became his partner. Kirchner noted in his diary in retrospect: "The beautiful, almost architectural bodies of these two girls replaced the soft Saxon bodies. In [..] drawings, prints, and paintings, these bodies shaped my sense of beauty for the depiction of the physically beautiful woman of our time." (E. L. Kirchner, in: Lothar Grisebach (ed.), Davoser Tagebuch, Ostfildern 1997, p. 86). In 1913, the "Brücke" artists described the depiction of the human being, and in particular the nude, as "the basis of all visual art" (quoted from: Ex. cat. Bremer Kunsthalle, 100 Jahre Brücke, Bremen 2005, p. 65). They interpreted the female nude as an independent pictorial element that embodied and visualized their artistic intentions in the truest sense of the word and helped E. L. Kirchner in particular to form his own expressive, so-called "Berlin style". In the present drawing of two female nudes lying side by side, touching each other in a meaningful way, Kirchner also succeeded in rendering the city’s nervous atmosphere, at the same time he provides account of his inner self with jagged, pointed forms, energetic strokes and only a few intense colors. It is not without reason that Kirchner has always been considered the "greatest drawer of German Expressionism" (Werner Haftmann, in: Ex. cat. documenta III, Handzeichnungen, Kassel 1964), who is "surpassed by no one in terms of inventiveness, variety of form, and expressiveness" (Magdalena M. Moeller, then director of the Brücke Museum, in: Ex. cat. Kirchner. Zeichnungen und Aquarelle, Brücke-Museum, Berlin 1993/94, p. 9). [CH]
More Information
+
Sell
Get a free appraisal for a similar object!
+
Register for
Ernst Ludwig Kirchner
+
Buying from A-Z
+
Contact a specialist
+
Ernst Ludwig Kirchner Biography
Share