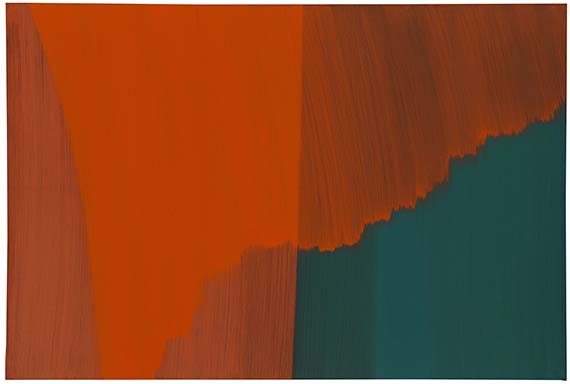 • The decade of her breakthrough: Grosse began to show her art in solo shows at renowned museums in the 1990s.
• The artist participated in the 56th Venice Biennial.
• Similar works from the 1990s are in, among others, the collection of the Deutsche Bank AG and the 'Sammlung zeitgenössischer Kunst der Bundesrepublik Deutschland' (The Federal Collection of Contemporary Art).
• In recent times large-scale solo shows of the artist were on display at the Hamburger Bahnhof Museum für Gegenwartskunst in Berlin, the Museum of Fine Arts in Boston, the HAM Helsinki Art Museum, the Museum Kunstpalast in Düsseldorf and the Museum Frieder Burda in Baden-Baden.
• Since 2017 Grosse has been part of the artist squad of Gagosian Gallery and is also represented by the renowned König Galerie.

We are grateful to the Studio Katharina Grosse, Berlin, for the kind support in cataloging this lot.

"I need the brilliance of color to get close to people."
Katharina Grosse talking to the artist Ati Maier, in: Bomb Magazine, April 1, 2011, http://bombmagazine.org/articles/katharina-grosse/.

As a master student of Gotthard Graubner at the Düsseldorf Art Academy, Katharina Grosse found her way to non-representational painting with a focus on the interaction of colors as early as in the 1980s. In 1992 she received the Villa Romana Prize and stayed in Florence for several months. In the years that followed, yellow, blue, green and red tones prevailed in her palette, with a single color usually dominating the picture‘s surface. In the large-format painting offered here, the artist works with a particularly striking cold-warm contrast. Using varying levels of opacity, Grosse lays multiple layers of rich orange over a bold blue-green. The traces of the broad brush are partly clearly visible, visualizing the artistic creative process and, in connection with the size of the canvas, the impressive intensity and sometimes translucent, sometimes much stronger opacity of the colors, give the work an actual spatial presence, a sublime sensuality and a clearly noticeable attraction.

Similar to Kasimir Malevich's black overpainting, Grosse's painting is a repetitive process of overpainting. In her artistic work, the artist also follows Malevich's innovative concept of painting, the completely erased, traditional understanding of picture and image. Her painting no longer serves to create a certain illusion, no longer depicts something that corresponds to actual reality or an imaginary world of ideas. Instead, the artist strives to dissolve the boundaries between image and reality and, in a performative act, creates an entirely new reality: "What appears in the image field is not subordinate to existing reality, it constitutes that reality. I don't interpret reality; I understand reality as a performative activity that generates itself newly and differently, again and again." (Katharina Grosse in a conversation with the artist Ati Maier, in: Bomb Magazine (online), April 1, 2011).

From the canvas works of the 1990s, to which the work offered here belongs, the spatial paintings evolved over the following years, in which Grosse applied the paint as monumental, sprawling surfaces to interior and exterior walls. Today, Grosse not only applies her paintings to paper, canvas and other traditional image carriers, but also to meter-long fabric constructions, furniture, floors, heaps of earth, walls and facades. In this way, she now occupies entire rooms and locations, which are transformed into oversized installations through her artistic intervention. For this border-crossing art, Katharina Grosse is regarded as one of the most important and renowned painters of her generation and of contemporary abstract art in general. Her most acclaimed solo exhibitions in recent years include the shows at the Hamburger Bahnhof, Museum für Gegenwart, Berlin and the Baltimore Museum of Art (2020), the chi K11 art museum in Shanghai (2018), at MoMA PS1 on Long Island and the Museum Frieder Burda in Baden-Baden (2016), at the Museum Kunstpalast in Düsseldorf (2014), the Kunstmuseum Bonn (2011), at MASS MoCA, Massachusetts (2010), and at the Palais de Tokyo, Paris (2005). Katharina Grosse also showed works at the Helsinki Biennial in the Helsinki Art Museum and was represented at the Venice Biennial with her work "Untitled Trumpet" in 2015. [CH]
More Information
+
Sell
Get a free appraisal for a similar object!
+
Register for
Katharina Grosse
+
Buying from A-Z
+
Contact a specialist
+
Katharina Grosse Biography
Share