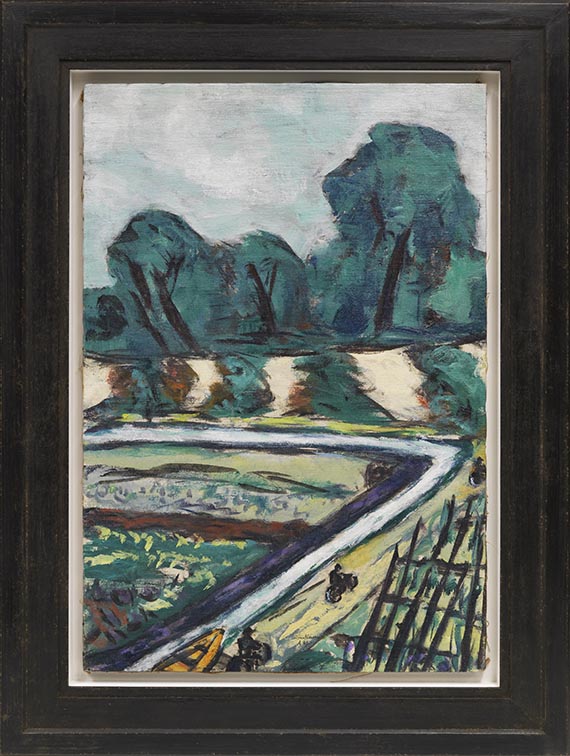 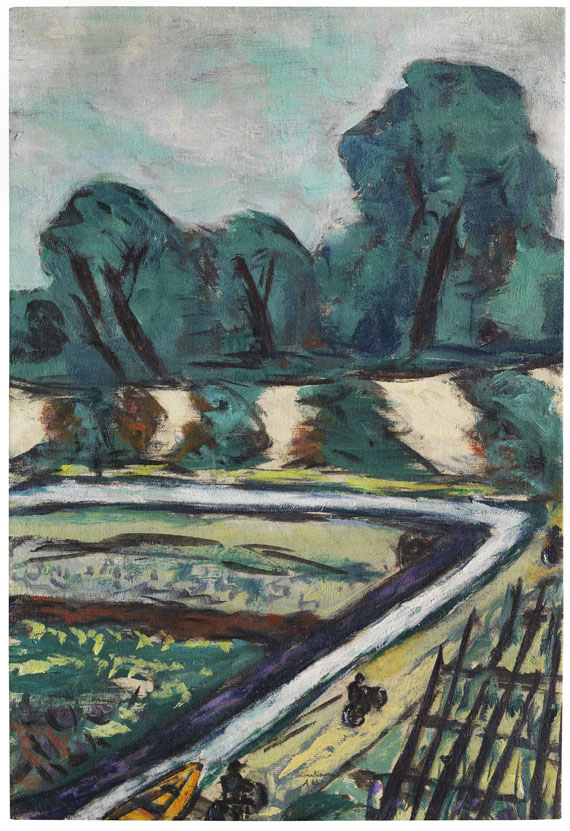 • Made during the fateful days in exile in Amsterdam.
• Max Beckmann chose to render this landscape painting in an unusual bird's eye view, which is rare in his oeuvre.
• Distanced look at a bicycle trip of the kind that Max and Quappi Beckmann also did from time to time during this difficult era.
• The painting was part of one of the most exquisite Beckmann collections for almost 30 years: Collection Morten D. May, St. Louis, USA.
• Next to the "Holländischer Fahrradweg", the important time from 1940 to 1942 also yielded main works like "Abfahrt" (MoMA, since 1942).

Beckmann's life in exile
When Max Beckmann described the painting as "finished" in his diary on October 3, 1940, he had been living with his wife Mathilde, known as Quappi, for a good three years in in self-imposed exile in peaceful Amsterdam. The serious consideration of moving to Paris again after 1930 was abandoned when France and Great Britain declared war on Germany on September 3, 1939. On May 10, 1940, the western campaign of the German Wehrmacht began with the main objective of conquering France. At the same time, Germany also attacked the Netherlands, the war soon came to Amsterdam, the threat of planes flying over at night became a regular nuisance, the restrictions in everyday life became more noticeable for the artist, and traveling abroad was no longer possible. The artist was confronted with the German Wehrmacht in self-imposed exile, which he had sought in order to escape from the political developments in Germany, which now seem to have followed him. Friends helped Beckmann to afford a living and tontinue working in those years. Günther Franke, his main gallerist in Munich, supported the artist and acquired pictures from the Amsterdam studio, which his son Peter, a doctor in the Luftwaffe, then smuggled to Munich using the means of transport available to him.

Beckmann also met regularly with intellectuals in Amsterdam, above all with the poet Wolfgang Frommel, the painters Friedrich Vordemberge-Gildewart and Otto Herbert Fiedler, or with his biographer and work chronicler Erhard Göpel. They all appear in Beckmann's magnificent world of images. "And yet he suffered greatly from isolation and poor nutrition," said his American friend and collector Stephan Lackner, who lived in Paris until autumn 1939, and who supported Beckmann with monthly acquisitions. "Even the Zandvoort beach, where he and Quappi often rode theit bikes, was barricaded from June 1942 onwards. It is amazing how the painter drew on intense memories in his imagination. Landscapes from Cap Martin, Monte Carlo and Bandol appear again and again in the oeuvre from 1940 to 1944." (Stephan Lackner, Exil in Amsterdam and Paris, in exhibition cat.: Max Beckmann. Retrospective, Munich 1984, p. 155) At that time postcards and photographs served the artist to sharpen his memories of the French beach resorts or Dutch coastal landscapes he visited at the time. Lackner also mentions that with 280 paintings, a disproportionately large part of his works were created during the Amsterdam years, in addition to the mythologically and symbolically charged figure compositions also landscapes , which, with an air of vacation and relaxation, differ from the "world theater of the painter Beckmann", as Staphan Lackner aptly described it in 1938.
And so the "Holländische Fahrradweg" (Dutch Cycling Path), also known as "Hilversumer Waldlandschaft" (Hilversum Forest Landscape), seems like a relaxing contemplation, a homage to the cherished landscape of his adopted home, the Netherlands, "which were only roped into the war in May 1940, when the Germans invaded and we were trapped,” says Mathilde 'Quappi' Beckmann in her memoirs of her life with Max Beckmann (Munich 1985, p. 27). "Despite the frequent depressions that afflicted Max because he took the misery of war so seriously, he loved Amsterdam more and more. He often wandered along the canals, went to the Rembrandt House to talk about Rembrandt, whom he appreciated and adored above everything. He also liked the area around Amsterdam. In the first years of the war we often went to the sea. From 1942 onwards, trips to the coast were no longer allowed. We then took the train to Hilversum and rented bicycles and rode through the forest or through the blooming heath for hours. "Wonderful bike tour Hilversum, Eykenstein. Brought a bouquet of foxgloves home with me," Max wrote in his diary on July 7, 1942. When it was still allowed, we drove to Haarlem and Overveen and cycled through the dunes on the country road behind the beach. But these excursions could not be continued for long, because the Allied air raids became more frequent and more severe," continues Mathilde 'Quappi' Beckmann. (ibid.) In addition to the “mythologically and symbolically charged figure compositions”, Max Beckmann also painted a larger group of landscape paintings in Holland, among them of Overveen with a water tower, the cypresses of Eyckenstein or some landscapes around Laren.