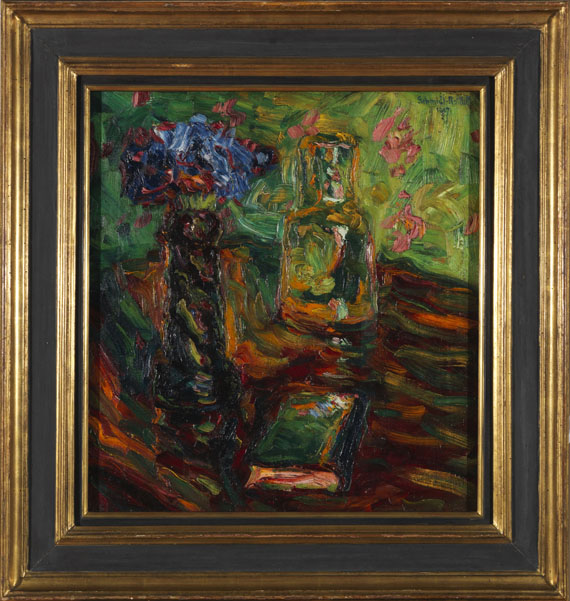 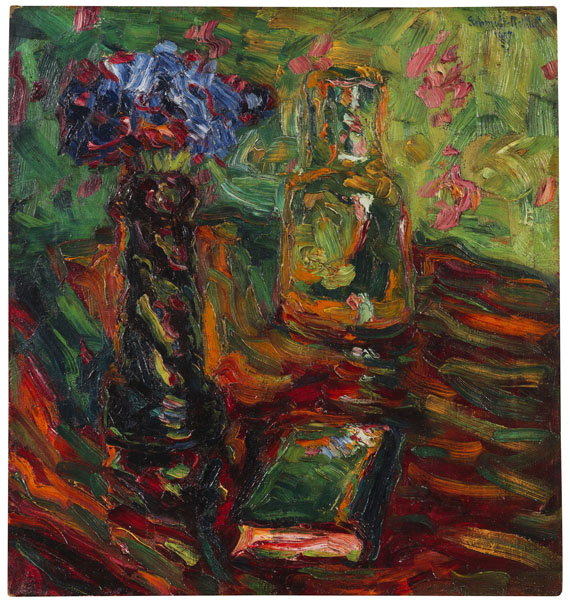 The Fundamental Meaning of the Still Life
The "Stillleben mit Rosen und Karaffe“ (Still Life with Roses and Carafe) is a particularly early still life in Schmidt-Rottluff's oeuvre. Overall, the genre had a great significance for the artist, especially in the 1920s and in his late work after 1945. To him the motif was an object of meditation and a way of entering into dialog with artistic, formal ideas and problems. In them he examined the relationships of the forms found in the visible world, the effects of colors and their contrasts, the different effects of colored lines and surfaces, and he analyzed the possibilities of spatial design of volumes. The aggregation of artistic principles can be observed in the present painting from 1907, when Schmidt-Rottluff was still searching for his own personal pictorial language. The artist incorporated influences from Impressionism, Neo-Impressionism, and the great role model Vincent van Gogh, probing to which extent they corresponded to his expressive will.

The Dawn of a New Artistic Era
Two years earlier, in June 1905, Schmidt-Rottluff founded the artist group "Brücke" together with his schoolmate Erich Heckel and Ernst Ludwig Kirchner and Fritz Bleyl, two fellow architecture students at the Dresden University. Their goal was to break new ground in art, as well as to break away from the traditions of the academic art world and their strict view of art at the turn of the century. Above all, they wanted to "show directly and unadulterated [..]" what "urged them to create" (quoted from: The jointly formulated program cut into wood by Kirchner in 1906: Dube H 696, reprinted in: Magdalena M. Moeller (ed.): Dokumente der Künstlergruppe Brücke. Brücke archive no. 22, Munich 2007, pp. 34-37, p. 42), that is to find a pictorial translation for their emotion and experiences. The motif was supposed to be more than a superficial optical impression, instead they aimed at rendering an expression of the subjective inner sensation of the moment. In 1905 and 1906, the artists were initially inspired by French Impressionism and Neo-Impressionism. In late 1906 the Dresden Galerie Arnold showed an exhibition of works by Vincent van Gogh, whom the artists already knew from Julius Meier-Graefe's book "Modern Art: being a contribution to a new system of aesthetics" from 1904. The experience of the bright colors and the spirited brushwork in front of the original works would be a formative experience. The possibility of an individual expression, which the young "Brücke" artists saw in van Gogh, was a liberation from formal constraints. Their individual signature remained apparent in their paintings and watercolors, visualizing the dynamics of the sentiment.

The Inner World in an Energetic External Realization
Schmidt-Rottluff's "Stillleben mit Rosen und Karaffe" is composed of striking strokes of thick, impasto paint. The entire surface of the painting vibrates, here and there serpentine lines enliven the individual color zones. Schmidt-Rottluff's youthful storminess becomes comprehensible in the application of paint. The dynamic flow makes the energetic painting process and the artist’s verve comprehensible. The determined force of the brushstrokes illustrates the artist's strong desire to create. Hints of Impressionism echo in the impasto paint, but the artist had already overcome the light, pastel tonality. The unmixed colors green, red, blue and yellow show the inspiration of Neo-Impressionism, whereby the pointillist principle is completely abandoned in favor of the dynamic brushwork that remains visible.

The Illustration of the Creative Frenzy
Schmidt-Rottluff was less concerned with the motif itself, but increasingly succeeded in making his own inner mood, the enthusiastic creative frenzy, visible in the picture. This becomes particularly obvious in comparisons with portraits or landscapes created during that period, which convey the same principle of a passionate duct and a visible temper (fig.). In the further development of his art, this visibility of spontaneity and emotion would become a key component of his Expressionism. Schmidt-Rottluff's personality is also expressed in the compact, heavy brushwork of the dense, impasto application of the paint. In his 1913 "Brücke Chronic", the massive and robust style inspired his colleague Ernst Ludwig Kirchner to coin the term "monumental Impressionism" to describe Schmidt-Rottluff's early paintings.