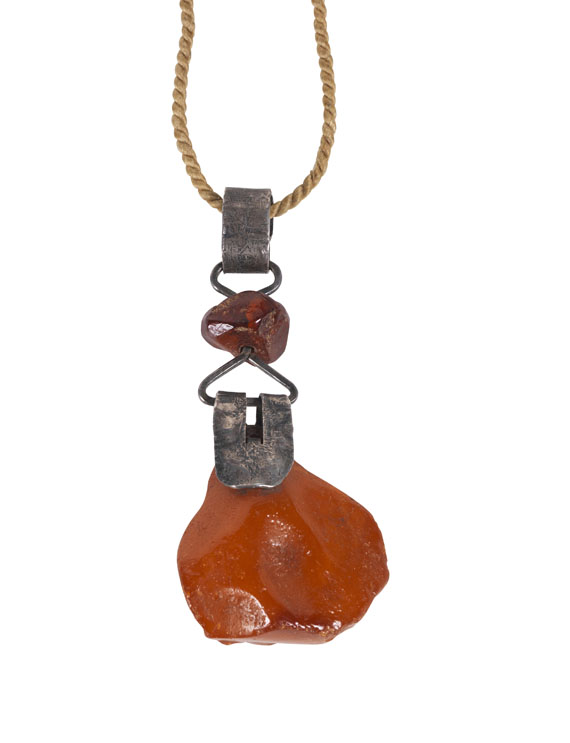 • Among the "Brücke" artists Karl Schmidt-Rottluff was most intensively occupied with jewelry making.
• He made his first brooches for the painter Emmy Ritter and the Hamburg patron Rosa Schapire in Dangast in 1910.
• Schmidt-Rottluff crafted the pieces himself and made the lack of craftsmanship the works' actual expression.

In the summer of 1913, Schmidt-Rottluff stayed in Nidden on the Curonian Spit. The small fishing village, which was then in East Prussia and is part of Lithuania today, had already been visited by students from the nearby Königsberg Art Academy and fellow artists such as Lovis Corinth and Max Pechstein, prompting Schmidt-Rottluff to make his first trip. Strolling along the Baltic Sea beach, Schmidt-Rottluff found some pieces of amber of considerable size, which served as inspirational material for a range of jewelry items and with which he expanded the metal- and silver works from the Dangast period. Schmidt-Rottluff left the Nidda amber finds in their natural state. The watch pendant with the two stones, which are so different in shape, size and color, indicates that these possibly were two finds that belonged together. He usually processed the amber making pendants with silver attachments, often as watch pendants intended as gifts for male friends, his younger brother Kurt Schmidt or passive members of the "Brücke", such as Ernst Beyersdorff in Oldenburg. The first pieces of jewelry were made in Dangast as early as in 1910, which made Schmidt-Rottluff one of the first "Brücke" artists to turn to this handicraft. He gave these first pieces to, for example, his painter friend Emma Ritter or the art historian Rosa Schapire. Other pieces were made for the wives of the collectors. What is so fascinating about this independent group of works, which is still an integral part of the artist‘s oeuvre, is its ambivalence between artwork, collector's item and exhibit on the one hand and an object of utility and ornament on the other. In doing so, Schmidt-Rottluff followed a modernist aesthetic in which artistic expression reaches all areas of life, genres and materials. When it comes to production, Schmidt-Rottluff did not follow any technical requirements, since he was not a trained goldsmith himself. What is behind the pieces is an irrepressible interest in the design of a wide variety of materials, including those that are difficult to work with, more resistant, rougher and more original, such as wood, stone and metal. Sculpting and graphic skills were also necessary for the design of forms and surfaces. In contrast to the industrially manufactured jewelry of the time, the direct relationship between the artist and the material can be seen in the intentionally raw treatment. In 1925, the first special exhibition of sculptural and handicraft works by Schmidt-Rottluff took place in the Hamburg Museum for Arts and Crafts. The museum still has a unique collection today, some of the objects were gifts from the artist and some of them were acquired. Our watch pendant was presented at the Königsberg Museum in 1928, which Alfred Rohde (1892-1945), former employee of the Hamburg Museum and renowned amber expert, had been in charge of since October 1927. The few amber pendants in this group of works in which Schmidt-Rottluff used his beach finds from 1913 are of a certain rarity and have a particularly personal appeal. [KT]
More Information
+
Sell
Get a free appraisal for a similar object!
+
Register for
Karl Schmidt-Rottluff
+
Buying from A-Z
+
Contact a specialist
+
Karl Schmidt-Rottluff Biography
Share