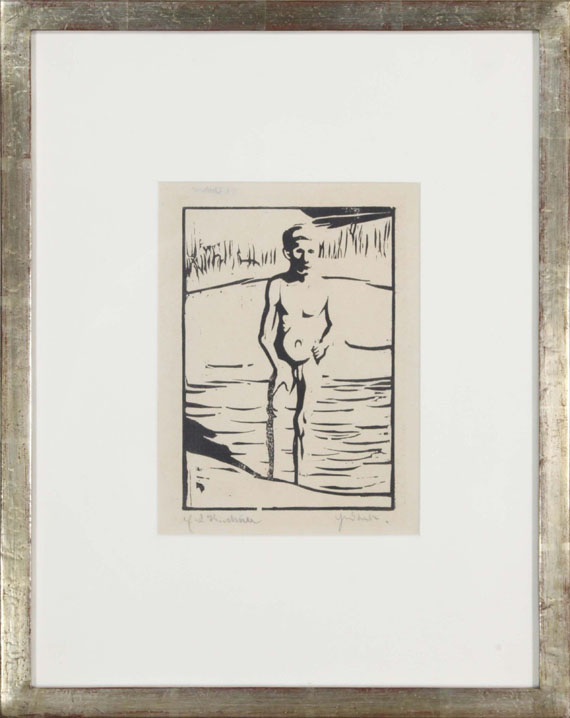 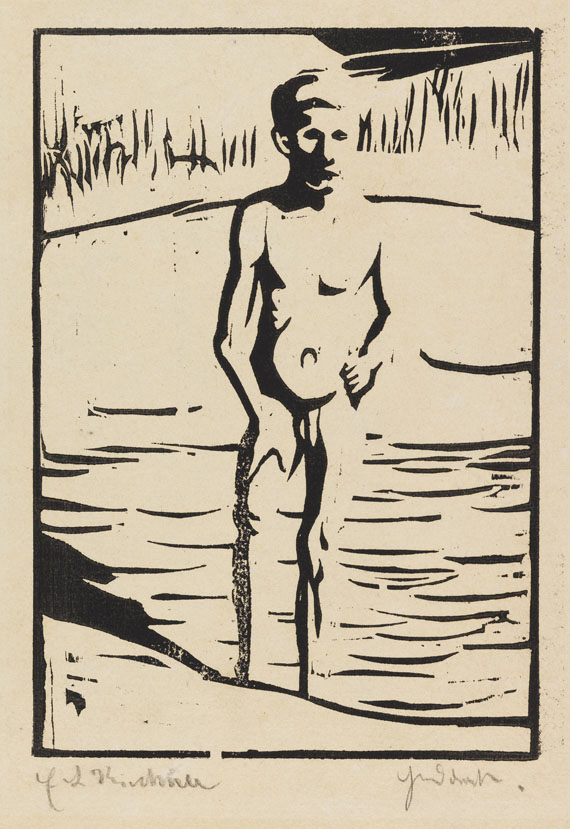 
• One of to date only three known copies.
• For the first time on the international auction market.
• Made the year the "Brücke" was founded, the woodcut shows one of the group's later main themes: Plein-air nudes.
• "Badender Junge" is one of E. L. Kirchner's earliest artistic accomplishments.

With the technique of the woodcut, Kirchner captured the essence of graphic art most vividly. The woodcut, in particular, forced him to use simple, concentrated formulations like it wasn‘t the case with any other technique, and it always meant a new challenge for him to overcome the resistance of the material in order to execute his ideas. At times, woodcuts were even more important to Kirchner than paintings. The works created in 1904 were still very much influenced by Art Nouveau. The motifs are cut out of the wood as a contrast between line and surface, black and white. Kirchner clearly processed suggestions from magazines such as "Insel", "Jugend", "Ver Sacrum" or "Simplicissimus", in which numerous decorative graphics with framing lines were shown at the time. With a few outlines, Kirchner cuts the contours of a pond landscape in front of a gentle embankment in the background. A slim, naked boy in bright sunlight stands in shallow, ankle-deep water, slightly moving forward. Supporting himself with his right hand on his thigh and his left hand on his hip, the boy appears to be moving out of the water towards the shore. This woodcut is one of Kirchner's earliest artistic works, which he produced while he was studying architecture at the Technical University in Dresden. [MvL]
More Information
+
Sell
Get a free appraisal for a similar object!
+
Register for
Ernst Ludwig Kirchner
+
Buying from A-Z
+
Contact a specialist
+
Ernst Ludwig Kirchner Biography
Share