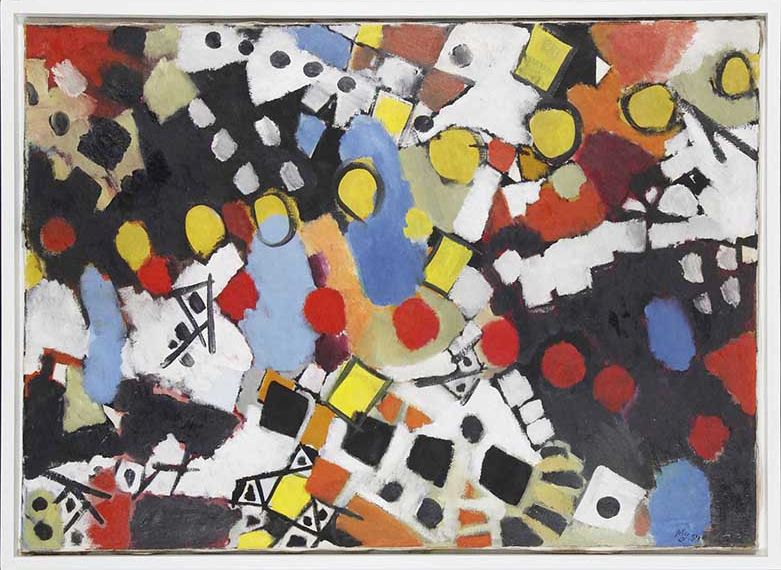 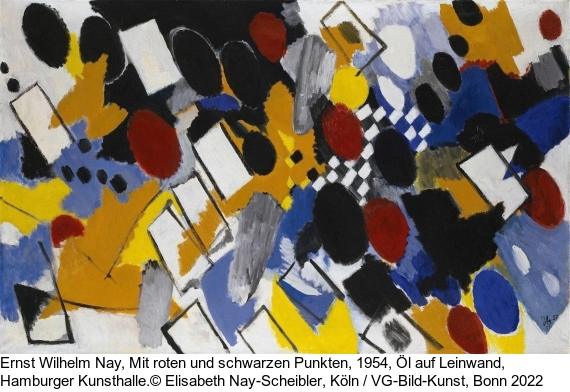 • This is one of the famous Disc Pictures (1954-1962).
• Back then Ernst Wilhelm Nay stood almost exemplarily for the occupation with art between figuration and abstraction.
• The artist stages a scene with an almost weightless appeal.
• Distinguished provenance.
• Comparable works from 1954 are at, among others, the Kunsthalle Hamburg, the Städel Museum, Frankfurt a. M. and the Sprengel Museum, Hanover.
• Currently, the Kunsthalle Hamburg honors E. W. Nay with a retrospective exhibition (March 25 - August 7, 2022), followed by shows at Museum Wiesbaden and Museum Küppersmühle für Moderne Kunst.

Occupation with figuration and abstraction
With the beginning of the work phase of the Rhythmic Pictures in 1951 and 1952, Ernst Wilhelm Nay put focus "solely on the canvas, the surface, the color, the form". (E. W. Nay, Lesebuch. Selbstzeugnisse und Schriften 1931-1968, Cologne 2002, p. 62) Now that even the last references to representational elements in his work, such as those still to be found in the Hekate pictures, have disappeared, the artist concentrates on one thought that determines the development of the motifs as a whole, which in their wild and colorful appearance reveal many of his typical, spontaneous decisions. "It wasn't until 1953 that I became very systematic and tried to develop a theory of painting with the discs, a theory as a basis for art," says the artist. "I went deep into the aesthetic principle until there was nothing left. I had to take my chances. At times I was very close to a modern academy of painting. […] I created my own principle and searched for it on all sides with great hope for an opening that either had to come or the whole thing would have been a waste." (Lesebuch, p. 207). "From this basic painting, [.] I first developed all conceivable variations. And finally it became more than the painting in nuce [in the core]. " (Lesebuch, p. 221)

Beginning of the disc
"Chromatic Chains" is one of the very first works by Ernst Wilhelm Nay's famous disc paintings. Gestural forms and bright, circular dabs of color proliferate across the format, taking on a lyrical, almost rhythmic form and reflecting the artist's lively mood. Spots and densely painted blocks of color in vermillion, burnt ochre, golden yellow and ink blue enliven the composition. Impulsive, linear strokes of color interrupt the pulsating arrangement of the improvised forms. Squares with multicolored and complementary color circles that run like links in a chain, as the title of the work alludes to. The colors are lively and combine black with cyan blue, mustard yellow, scarlet red and orange to great effect, a free, musical aesthetic with painted circular forms. The artist stages a seemingly weightless pictorial scenery that "virtually overflows with joie de vivre, rhythm, blaze of color, speed of the line and energetic movement," according to the art historian and Nay expert Siegfried Gohr. (In: Ernst Wilhelm Nay - Ein Essay, exhibition catalog, Stedelijk Museum, Amsterdam, 1998, p. 27).

The success of this new orientation of his art, which Nay now reflects more than ever with color theory and methodological insights, documents a great sovereignty in dealing with the artistic means. At the time, Nay stood almost symbolically for the confrontation between figuration and abstraction and also for the painter's external success that began at the same time, which may also have contributed to the fact that this central work period was to be by far the longest within Nay's oeuvre. [MvL]
More Information
+
Sell
Get a free appraisal for a similar object!
+
Register for
Ernst Wilhelm Nay
+
Buying from A-Z
+
Contact a specialist
+
Ernst Wilhelm Nay Biography
Share