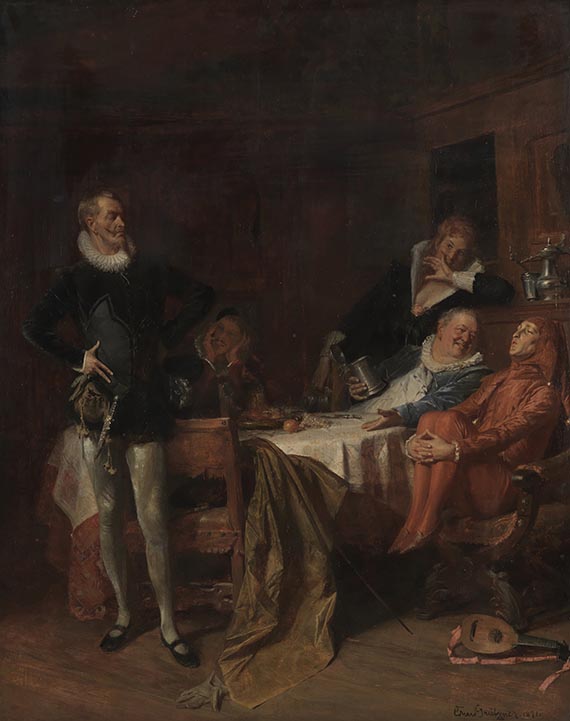 A number of artists working in 19th-century historical and genre painting drew upon literary themes which had become part of general cultural knowledge through their frequent appearance in books. In Grützner’s case, for instance, the main themes are the likeable drunkard Sir John Falstaff from William Shakespeare’s “Henry IV” and “The Merry Wives of Windsor” and scenes from comedies such as “The Twelfth Night”, which was written around the year 1600. Mistaken identities, masquerades, debauchery and tumultuous events make this play an obvious choice for an artist like Grützner who enjoyed the challenge of scenic productions. With consummate skill and imagination, he dresses his characters in the costumes of 17th century England and has them strike a pose befitting an actor. Beyond his love of rediscovering historical periods, this work demonstrates Grützner’s effortless delight in linking theater, literature and art, and the opportunity to stage a production that allows the artist to become the director. [KT]
More Information
+
Sell
Get a free appraisal for a similar object!
+
Register for
Eduard von Grützner
+
Buying from A-Z
+
Contact a specialist
+
Eduard von Grützner Biography
Share