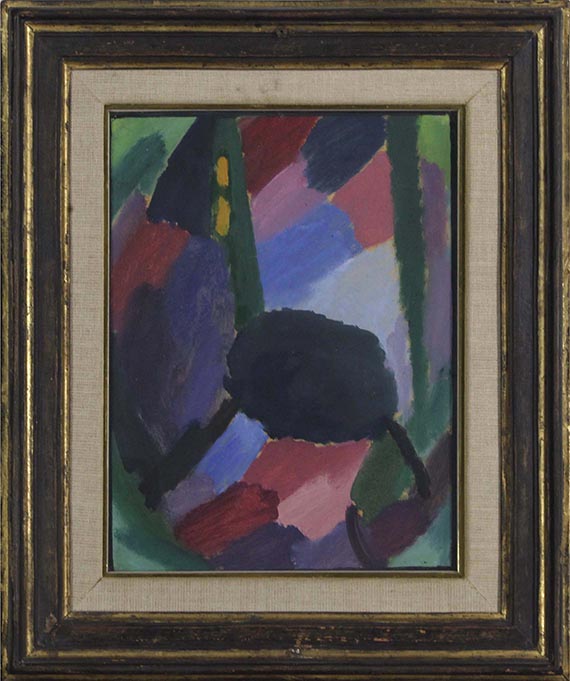 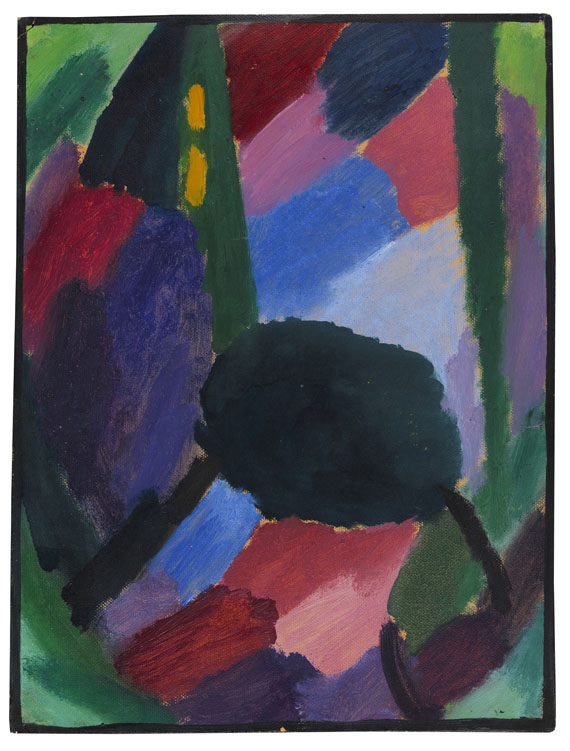 "Through hard work and with an utmost tension, I gradually found the proper forms and colors to express what my spiritual self demanded.“
Alexej von Jawlensky, quoted after: Armin Zweite, Annegret Hoberg (ed.), Der Blaue Reiter im Lenbachhaus, Munich 1991, p. 210.

With the outbreak of World War I, all Russians, including Alexej von Jawlensky, had to leave Germany within two days. In contrast to Wassily Kandinsky, who returned to Moscow, he decided to leave Munich with his family and Marianne von Werefkin for Switzerland and settled in St. Prex on Lake Geneva, where he was close to friends. Jawlensky rented an apartment there and now no longer had his own studio, but only a small study, the view from its window would became fundamental for the series of "Variations on a Landscape Theme", which initially dominated the work and which was created here during the years he spent in Switzerland. Based on the view from his window in the cramped new apartment, he first painted variations of what he saw on a very special, linen-textured paper, and later also on cardboard. In his own emphatic and intensive way of working through a painterly problem, he continued to develop this motif in a highly varied manner over the years. He increasingly liberated himself from the what he actually saw and from the strict arrangement of real form and color, so that the landscape variations can be regarded as "abstract" works. When he fled, Jawlensky not only left behind many personal things in Munich, but also - it seems - the themes and style of his previous paintings. The painting style of even greater, lighter expressiveness in playfully staged motifs, which became apparent during his stay in Bordighera in the spring of 1914, accompanied the artist to his new domicile, where the first series of variations, which deeply affected his pictorial program, were created: Several times a day he painted the same view of the front garden with the different types of trees and bushes, the sky above the path to the lake past a neighboring house, "inspired by the respective mood in nature with my spirit", wrote Jawlensky in his memoirs. Starting with a first look, for example in the “Variation, der Weg. Mutter aller Variationen“ (Variation, the Path. Mother of all Variations), probably created shortly after the arrival in autumn 1914, these so-called variations detach themselves from the natural conditions, forms once attained are repeatedly pieced into the composition, achieves his goal through the color, and in such a brilliant way that the variations, although formally similar, are always open to new interpretations. Color and form dominate and thus gain in intensity, seem like the transfiguration of a motif, become a pictorial idea: a view from a window, which Jawlensky initially captured in approximate reality, becomes the archetype of a long series of variations that are hardly accounts of the actual landscape. Increasing abstraction, which illustrates Jawlensky's search for the archetype, was pursued in all three of his consecutive thematic groups - the Variations, the Constructive Heads and the Meditations. [MvL]
More Information
+
Sell
Get a free appraisal for a similar object!
+
Register for
Alexej von Jawlensky
+
Buying from A-Z
+
Contact a specialist
+
Alexej von Jawlensky Biography
Share