• Cindy Sherman is one of the most important artists and influencers of our time.
• In the photographs we see women in changing roles, a whole encyclopedia of female poses, gestures and body images.
• From Sherman's second "Fashion Series" (1993) for Harper's Bazaar.
• Part of the Lothar Schirmer Collection since the year of its creation.
• One of only six copies, two of which are in the collection of the Museum of Fine Arts in Boston and the Carnegie Museum of Art in Pittsburgh.
• In the last ten years alone, the Museum of Modern Art and the Whitney Museum of American Art in New York, the Fondation Louis Vuitton in Paris, the San Francisco Museum of Art, the National Portrait Gallery in London and the National Museum of Modern Art in Kyoto, among others, have presented large-scale solo exhibitions of the artist's work.
• Sherman participates in the 55th Venice Biennale in 2013.
• Since 2021 the artist has been represented by the renowned gallery Hauser & Wirth.

PROVENANCE:
Metro Pictures, New York (with the gallery label on the reverse).
Collection Lothar Schirmer, Munich (acquired from the above in 1993).

She works as a director, actress, stage- and costume designer, she is responsible for make-up and lighting, and in the background she acts as a perception psychologist in order to draw the viewer's attention to the details of her production. Her medium is the camera, the New York studio her stage. On the art marketplaces, she fetches the highest prices in the field of photography. Circling the essence of her portrait art, her Munich collector and publisher Lothar Schirmer once spoke of "single-person and single-image films". This is so apt because it shifts her style into the open, into the sphere of works between art and cinema, between painting and photography, between performance and self-design. And because he is referring to the dazzling paradox in the artist's work: we see women in changing roles, there are now hundreds of them, a whole encyclopedia of female poses, gestures and body images. And yet, on closer inspection, it is always only one, namely the artist herself, whose persona is reflected in the multitude of these women. The American artist Cindy Sherman (*1954) glides through the centuries, studying female attitudes, airs and graces and archetypes, comparing them with female figures from the history of modern art, film and everyday life. She studies the how the legs are crossed, the shape of the breasts, the gaze, the fall of light and shadow, the folds of the fabric. She appropriates her performance gestures, mixes and recycles them into captivating monodramas in front of her camera. She is just as interested in the mythical as in the trivial, in female perpetrators and victims, in big screen icons and in nameless pin-up girls.

Photography and performance
Sherman's early series "Untitled Film Stills" (1978/79) and "Centerfolds" (1981) are among the incunabulas of post-modernism today. None of the photographs show an authentic film image, the scenes are all fictitious. Nevertheless, they awaken a feeling of familiarity in us, of a déjà vu with the celebrity ladies and divas from the history of film. In fact, Sherman compresses traces of our visual memory into something thoroughly artificial. The represented body does not exist; and the performing body, pressing the self-timer, confronts us with an aggressively averted or blank, frozen gaze. The message of these looks seems strange, almost uncomfortable: Here, in this woman's body, no one is at home any longer. The subject is gone, undressed, it has disappeared behind all the fame, glamor and self-optimization. In her later series of sad clowns, Sherman exaggerateed the blank stare into a grotesque.

Body images from history
It is always interesting to zoom in on the individual scenographic elements of her art of self-portrayal to find out what exactly looks familiar to us here, where we think we know it from and how the artist stages it. What is shown, what is hidden? Which sources, which visual worlds are used here artistically?

"Untitled #282", from 1993, is part of a serial work. The photograph is part of Sherman's second fashion series, in which she restages body images from the historical fundus in the setting of a fashion shoot. A whole ensemble of femininity projections is used here like a game of deception. First, there is the translucent dress, which nestles like a net around the pale, stretched-out abdomen. It is a design by French couturier Jean-Paul Gautier. His trademark is the mixing of genders, social classes, cultures and materials. Through the reinterpretation of corsages and tulle fabrics, he gave the female body an altered provocative visibility and a new idea of \u8203\u8203 beauty. To this day, many celibrities prefer the eccentric outfits from his Maison. Madonna, Kylie Minogue or the female figures of Pedro Aldomovar wear his costumes. Jean-Paul Gaultier is the designer of pop culture and show business. And he's from the same generation as Cindy Sherman. Perhaps the models on some fashion spreads don't look entirely coincidental like Sherman's early female characters. Of cool elegance, very sexy and occasionally lost in front of high architectural backdrops or interiors of a beautiful appearance.
The stereotypical posture of an odalisque is easier to identify, masterfully staged in similarly lush divan and cushion compositions, surrounded by patterned screens or draperies by artist predecessors such as Jean-Auguste-Dominique Ingres, Henri Matisse, Auguste Renoir or Ernst Ludwig Kirchner. Sherman self-confidently hijacks the male muse motif and transforms it into a self-portrait of an artist. What else is easy to decipher is Caravaggio's "Head of Medusa" with the snake hair, wide, glowing eyes, mouth open in a scream of horror. Just a reminder, after all, it is impossible to remember every thought-terminating cliché from the world of the gods: surprised by Athena while flirting with Poseidon, the goddess transformed the erotically over-talented Medusa into an ugly monster as punishment. The sight of her should turn anyone to stone. There was only one trick to evade this aggressive ability, and that was via a view-redirecting mirror, which Athena eventually gave to Zeus' son Perseus in order to be able to decapitate Medusa unscathed – which Perseus successfully did. In "Untitled #282" the camera becomes a mirror that allows or even forces us to look at Medusa's face. Cindy Sherman has secularized this gaze – one of the most famous and powerful ones in our cultural history and art history – made it lifeless and dull. Its "deadly emptiness" (Elisabeth Bronfen) is the focus of the picture, it catches the voyeuristic viewer at eye level.

Virtuoso theator of melancholy
And if one wanted to, we could make out a complicit call to her artist colleague Joan Jonas. In her live performance "Organic Honey" from the early 1970s, the grande dame of feminist video and performance art brings a whole range of her later signature attributes, including mask, mirror and fan into play. In a mirror ritual, Joan Jonas simultaneously stages herself and her masked double in front of the camera. Masquerade and self-reflection overlap in transparent hippie chic, feathered Medusa wigs and oriental jewelry. "Organic Honey" could be the artificial name of a drag queen today, back then it served as an alias for Jonas' double. Cindy Sherman's Freeze version is like a salute to the experimental performance scene of the sixties and seventies, in which women began to use their bodies as a medium. Twenty years later, Jonas' dancing game freezes into a film still with a fan, in which one of the most important contemporary artists and influencers winks at her big New York neighbor. Quote or coincidence? We can't read minds, but we can almost physically feel how in Cindy Sherman's virtuoso theater of melancholy all traces of the image find their space, respect and deeper meaning.

Marietta Piekenbrock
Marietta Piekenbrock is an author and curator. After stops in Aix-en-Provence, Munich, Paris and Essen, she lives in Berlin today. She initiates and organizes exhibitions, festivals and programs in the fields of theater, dance, performance and visual arts. She was a member of the board of directors of the European cultural festival RUHR.2010, head dramatic adviser of the Ruhrtriennale 2012–2014, and head of programming at the Volksbu¨hne Berlin, where she was in charge of an interdisciplinary program together with the museum director Chris Dercon until 2018. She has published numerous essays, books and exhibitions catalogs covering theater, dance, art and cultural-political issues. Recently she curated the international exhibition “Global Groove. Kunst, Tanz, Performance und
Protest“, Museum Folkwang in Essen in 2021
More Information
+
Sell
Get a free appraisal for a similar object!
+
Register for
Cindy Sherman
+
Bidding Options
+
Written bid
+
Buying from A-Z
+
Contact a specialist
+
Cindy Sherman Biography
Share 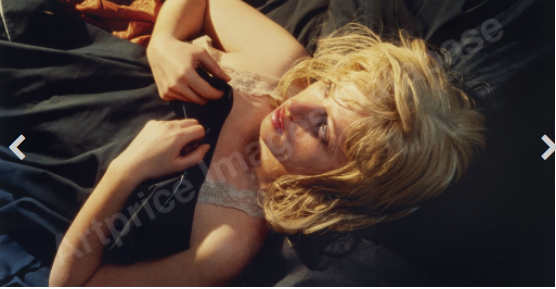