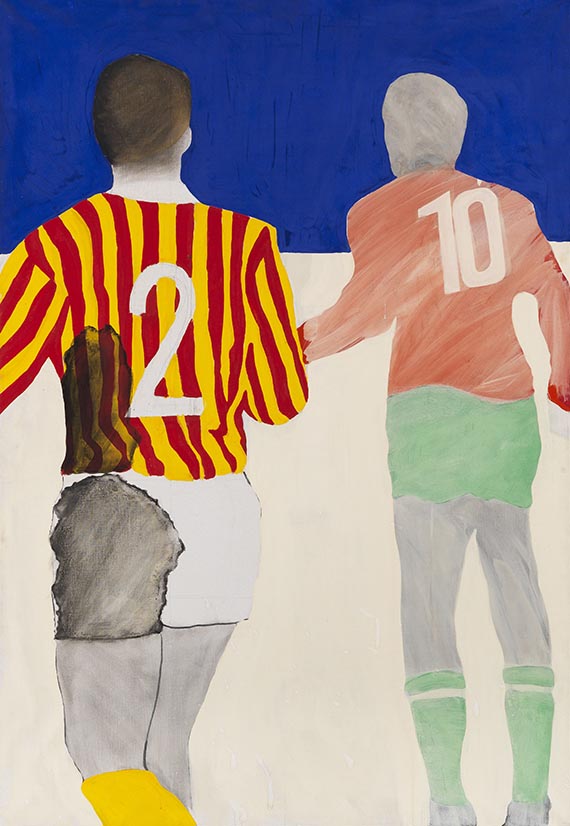 • For the first time offered on the international auction market.
• Paintings by Konrad Lueg are extremely rare on the art market.
• This "Signature Piece" was part of the pioneering 1967 show "Figurationen" at the 'Kunstgebäude am Schloßplatz' in Stuttgart.
• As Konrad Fischer, Konrad Lueg was one of the most important and most influential gallerists of the 1970s and 80es.
• For many years part of the Collection Gustav A. and Stella Baum, Wuppertal.
• A multi-part football player picture by Konrad Lueg is in the Städelmuseum Frankfurt.

In 1957 Korad Adenauer campaigned with the simple slogan "No experiments" and for most people in the young Federal Republic it was not quite clear what exactly that meant. In 1959, documenta II proclaimed abstraction – or what was considered to be the zeitgeist – to be the “world language”, just as a whole series of young artists in London and on the other side of the Atlantic were interested in what the “beautiful new world” was to be wrested off with new pictures. Appetizing templates from the advertising world, be it refrigerators, nifty typewriters or funnel-shaped bras, were adapted under the motto "Look and Feel", using the magic word POP. For young artists, POP had become an inevitable phenomenon. Paris was the European art center of the 1950s and the conditions in Düsseldorf were also comparatively favourable. Artists like Yves Klein had even brought "Le vide" to Krefeld, objects from the "Nouveaux Réalistes" were known from hearsay and Alfred Schmela was the best address among the progressive galleries in the Rhineland. As a young artist you could be a pirate, finally paint sausages, swimming animals, starfighters or even boxers and soccer players. While the critics were still struggling with terms, in May 1963 the artists – as legend has it – created the term “Imperialist Realism” as part of a long list of options, which was to be followed a little later by the even fancier term “Capitalist Realism”. "Poke in the eye" - Sigmar Polke, Konrad Lueg, Manfred Kuttner and Gerhard Richter had found a label for their "community of interests" and "a life with pop" under which they could soon also appear internationally: as inconspicuous, short-haired agents of pop, dressed in suit and tie, also with cool sunglasses, "demonstratively shy" in their self-assessment, but arrogant that it hurt when it came to promoting one's own cause.
Konrad Lueg wanted to be an artist. At the Düsseldorf University of Applied Sciences he studied with Bruno Goller and K. O. Götz. The right environment was found with Richter, Polke and Kuttner, Klapheck and Brüning. Lueg's real name was Konrad Fischer, just as Gerhard Richter called himself Gerd Richter back then. Identities and future careers are controlled in a highly playful manner using a wide variety of strategies. In terms of motifs, boxers and soccer players fit in quite well, as they are the new “heroes” who, of course, are not allowed to be, even if they have long since been willing to fill the gap in the system with understatement and “closeness to the people”. "And in the background Rahn would have to shoot, and Rahn shoots.. goal! Goal! Goal!” An ambiguously clear formulation that consequently lead to the first season of the Bundesliga in 1963.

In 1964, the 25-year-old Lueg had his first solo exhibition at Alfred Schmela's. It featured pictures of footballers and boxers, including two isolated defenders (one wearing a number 4 shirt) as "The Losers." They made their first appearance in the stadium, then as a black-and-white newspaper photo and then as a sad 115 by 149 centimeter picture in billboard colors. This comparatively inexpensive casein paint used for "applied graphics" dries quickly, guaranteeing the "flat" appearance. This is absolutely desirable, since after the "Matière première" battles of Informalism, a new art can only exist in the clearly visible opposite. Our picture "Footballer", 1964, is quickly identified as the top picture of the series and can be seen a short time later in Rudolf Jähling's Galerie Parnass, also a top address for the very hot art of the present. The "Zweier" is a defender, the "Zehner" is still the matchmaker today. The avant-garde from behind. A game without a ball. The gaze is directed “straight” into the distance. The south is blue, the field strangely white. January, February 1964 - lawn in the snow? This much illusion must be acceptable. The picture, immediately acquired by the extremely progressive collector couple Stella and Gustav Adolf Baum from Wuppertal, quickly became a "signature piece". Konrad Lueg is busy, travels a lot, knows many people, sees more than others and is soon considered the right choice when it comes to young talents in the Rhineland. The footballers are selected for the "Figurationen" exhibition at the Württembergischer Kunstverein in 1967 - the top show for contemporary art in Germany - and thus become exactly the image that the other artists associate with Lueg. A new generation. Everything is possible, everything is open.
In the shop window of her first exhibition was a box of detergent on a woodeen chair. "OMO" from the nearby grocery store, 1:1, without manipulation, without transformation, a thing as a sign. That wasn't the setting sun, that was the promise of plenty of foam. "Folk Art" 1963, commentary on the past, white west in the wild west. Konrad Lueg wanted to be an artist. He had studied with Bruno Goller and later with K. O. Götz at the Düsseldorf university, which provided the right environment. The new reality was to be negotiated with Richter, Polke and Kuttner, but also with Kriwet, Ruthenbeck and Gaul and the “elders”, Brüning and Klapheck. After all, “POP” was everything, and it was only logical that everything should also be available for purchase. And if you couldn't sell it, at least you wanted to show it off. And so the "Absolute Beginners" also invented the genres "department store exhibition", "front garden exhibition" and "invitation card with audience participation" - a green balloon with the white imprint "Leben mit POP" (Life with Pop). Excuse the banter.
More Information
+
Sell
Get a free appraisal for a similar object!
+
Register for
Konrad Lueg
+
Buying from A-Z
+
Contact a specialist
Share