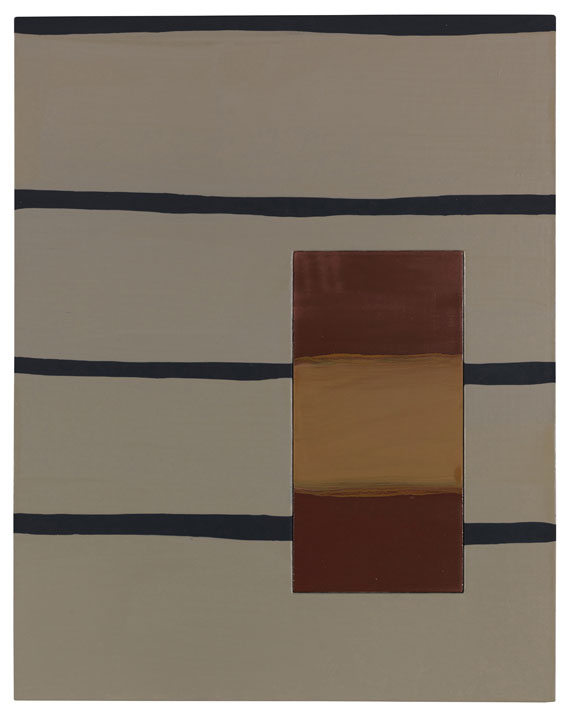 • Scully’s proof of a great effect in a small format.
• 'Insets', small canvas windows insert on the large canvas, are the most characteristic stylistic devices in the artist's oeuvre, which he began to employ in the 1970s.
• Similar works with separate, inset canvasses are at, among others, the Museum of Modern Art, New York, Tate Gallery, London, and the Modern Art Museum of Fort Worth, Texas.
• The same year this work was made, the Philips Collection in Washington, D. C., the Metropolitan Museum of Art in New York, the Modern Art Museum in Fort Worth (TX) and the Cincinnati Art Museum (OH) showed the grand solo show "Sean Scully. Wall of Light".
• Recently the Magyar Nemzeti Galéria in Budapest showed the comprehensive retrospective 'Sean Scully. Passenger'.


"People tend to think of abstraction as abstract. But nothing is abstract. It still is a self-portrait. A portrait of the own state."
Sean Scully, March 5, 2006, quoted from: Kelly Grovier, Kirsten Voigt (ed.), Inner. Gesammelte Schriften von Sean Scully, Berlin 2018, p. 192.

The worls is rectangular: Scully's special sense for structure and arrangement
In Sean Scully's fascinating oeuvre, which by now covers more than 50 years, multicolored, vertical and horizontal stripe compositions of different widths and lengths dominate, as well as rectangular areas of color, with which the artist fills his pictorial areas, which are in turn divided into rectangles. Although his painting is subject to constant development and change, his conception of art has not fundamentally changed over the years. His everyday environment has always provided him with ever new stimuli and inspiring visual impressions: the striped patterns of traditional fabrics on a trip to Morocco, the orthogonal streets of Manhattan, geometric cladding of facades, stacked straw bales tied into cubes or the millennia-old stone walls on the Aran Islands in Scully's homeland. "I've always been very overly attracted to a sense of structure," explains the artist (Interview with Kevin Power, quoted in: Inner. Gesammelte Schriften, p. 102). In this almost obsessive occupation with geometric structures and arrangements of rectangular shapes, not only paintings, watercolors, prints and photographs came into existence, but also sculptures, installations and even stained glass windows.

Idols and development
While the artist's early works resemble geometric networks of intersecting color lines, his oeuvre from after his immigration consists exclusively of works in which the color fields and stripes no longer intersect. On his way to his independent, characteristic imagery, he was influenced by , among others, the accurate linearity of Piet Mondrian, but also the vibrant color fields of Mark Rothko - artists who, like Scully, are obsessed with rhythm and a certain geometry. But Scully developed his very own, very emotional abstract painting in which light, the materiality of the colors and the feel of the surface texture play a major role. In addition to the multi-part works or works composed of individual picture carriers, the so-called 'insets' were created from the 1980s onward: window-like, smaller, painted canvases set into the actual canvas, with which the artist creates an attractive interruption, a confusion. As in our painting, Scully cuts out a part of the canvas and fills the resulting 'window' with a canvas that diverges in terms of color and structure, a so-called 'inset', which not only includes a literal, but also entails a visual break with the given horizontal stripe formation.


Fire and sky, landscape and sea
Although Scully has dedicated himself to completely abstract painting without figurative overtones, the works contain a wealth of possible associations, due to their color tones and the horizontally or vertically running, expressive stripe formations, which are partly reinforced by often descriptive picture titles. "Fire" (1984) shines in strong orange, "Land Sea Sky" (2000) shows the most beautiful nuances of strong blue tones. The works are reminiscent of the elements, of horizontal lines and coastal landscapes, thus pointing to a spark inherent in the pictures of a reality experienced by the artist, from which they grew. When looking at the work offered here "Passenger Line Deep Red" with its dark, black lines, the light gray and the contrasting, particularly warm-toned yellow and red, one could possibly think of foggy rainy days fought against with a cozy open fire and dark, overcast November skies.

An unmistakable, timeless art
With his painterly application of the colors, the strong visual, literally perceptible cold-warm and clear light-dark contrasts and with the simultaneity of strictly delimited and then again so softly contoured, vibrant color fields, the artist gives his work the very typical sensual expressiveness and spatial presence that have made him one of the most important abstract painters of his generation. His unmistakable, timeless art has been shown in numerous solo exhibitions worldwide since the 1980s and especially in recent years. In 2014/15 he was honored, as the first western artist ever, with a comprehensive retrospective show in China, in 2019 alone eight solo exhibitions of his work were held worldwide, e.g. at the National Gallery, London and the Albertina in Vienna. Last year, the Hungarian National Gallery showed a highly acclaimed retrospective of works from the past decades, and this year Scully‘s work is shown in grand solo exhibitions at both the Langen Foundation in Neuss and the Philadelphia Museum of Art. [CH]
More Information
+
Sell
Get a free appraisal for a similar object!
+
Register for
Sean Scully
+
Buying from A-Z
+
Contact a specialist
+
Sean Scully Biography
Share