Lot 61
Video
Back side 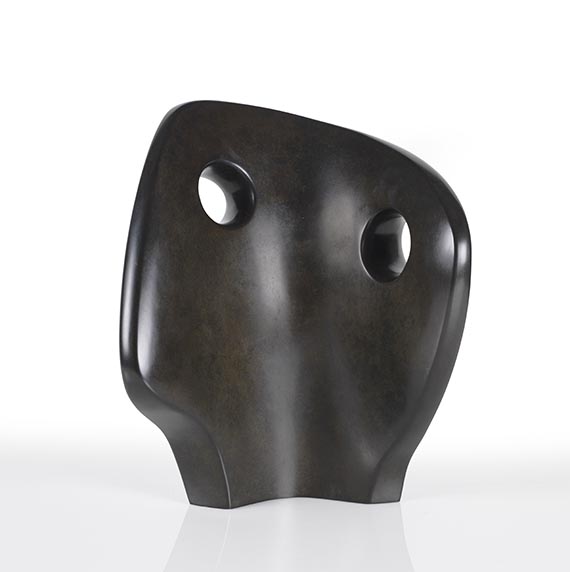 • Lifetime cast.
• In 1952 the plaster of this work was part of the retrospective at Haus am Waldsee, Berlin.
• Belongs to the works created around 1949, in which Hartung found an own, free style completely detached from figuration.
• Comparable works by the artist from around 1950 can be found in, among others, the collections of the Hamburger Kunsthalle and the Folkwang Museum, Essen.

We are grateful to the Estate of Nachlass Karl Hartung for the kind expert advice.

PROVENANCE:
From the artist's estate (stand with the estate stamp).

"If the sculpture is perforated so that it includes space, this certainly means a special behavior and perhaps a longing for transcendence."
Karl Hartung, 1963, in: ex. cat. Karl Harting. Werke und Dokumente, Germanisches Nationalmuseum, Nuremberg 1998, p. 91.

From the 1930s, Karl Hartung's artistic work underwent a change, a departure from the naturalistic and realistic German sculpture. He subjects his figurative works to more abstraction and also creates some entirely abstract works. The drafts for the work offered here were made in the late 1940s, when Hartung first devoted himself to a work complex of reclining female nudes and then to his "vegetative", "free" and "organic forms". The human, primarily female figure, its forms and physiognomy remains one of the great, all-encompassing themes of his oeuvre, but the radical reduction and the high degree of abstraction in some of his works is exceptional at this point in time.

In the dark brown, almost black patinated bronze offered here, there are also individual hints of human facial features, but Hartung has reduced the imitation of nature to its abstract forms: Below, a fine bulge suggests the chin, which merges into a neck-like base, and the offset inserts Holes form the eyes through which the viewer's gaze can fall on the space behind. The two 'eyes' thus not only interrupt the regularity of the surface, but also include the surrounding space in the observation of the object. Hartung calls it "making the invisible visible and the visible transparent. If the sculpture is perforated and includes space, this certainly means a special behavior and perhaps a longing for transcendence." (Karl Hartung, 1963, in: exhibition cat. Karl Hartung. Works and documents, Germanisches Nationalmuseum, Nuremberg 1998, p. 91, quoted from: Karl Hartung. Life and work, www.welt-der-form.net ).

With the exciting asymmetry, the smooth surface, the rounded edges and soft, gently curved lines, Hartung puts form, material aesthetics and viewing perspectives in the foreground of his work. The result is a balanced, elegant interplay of smooth, supple surfaces, consciously placed openings in the room and softly modulated, strongly rounded forms, with which the artist achieves a universally valid form of timeless beauty that is abstracted and lifted from human physiognomy.

With the development of this very personal abstraction and formal language, Karl Hartung established himself alongside contemporary greats such as Barbara Hepworth and Henry Moore in Great Britain as an important representative of European sculpture in the 20th century. In the 1950s he was at the peak of his artistic career. In 1950 he received a professorship for sculpting at the Academy of Fine Arts in Berlin. In 1952 and 1953 the Haus am Waldsee in Berlin and the Kestner Society in Hanover honored him with large-scale retrospectives. Hartung is represented with his works at the documenta in Kassel in 1955, 1959 and 1964 and thus once again proves his position as a pioneer of modern art in the German post-war period. [CH]
More Information
+
Sell
Get a free appraisal for a similar object!
+
Register for
Karl Hartung
+
Buying from A-Z
+
Contact a specialist
+
Karl Hartung Biography
Share