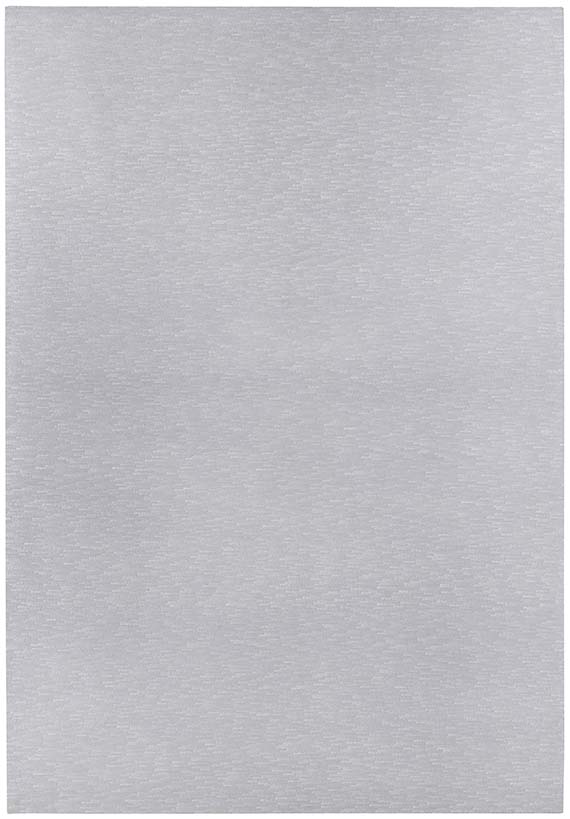 • Paintings from the series of details "1965/1–°infinity" are Opalka's main work.
• In 1995 Opalka presented works from this series in the Polish pavilion at the Venice Biennale.
• Roman Opalka is an exceptional artist.
• Other works from this series are at, among others, the Museum of Modern Art and the Guggenheim Museum in New York, at the Center Pompidou in Paris and the Lodz Art Museum.

PROVENANCE:
Galerie Walter Storms, Munich (with the gallery label on the stretcther).
Private collection Baden-Württemberg (acquired from the above in 1979).


"Since 1965 I have been painting the best picture possible, that is the true picture"
Roman Opalka in an interview with Thomas Deecke.

"The date, which we weigh so much, is ultimately unimportant. What matters to our mind and body is an existence in time, existence as in Heidegger, who, however, understood existence as dying. I paint the emotions for existence."
Roman Opalka in an interview with Heinz-Norbert Jocks, in: Kunstforum vol.150, 2000, pp. 170-181.

More than almost any other artist, Roman Opalka subjected himself and his entire oeuvre to a radical concept, which he consistently pursued from the first picture in 1965 to his death in 2011. After studying at the Academy of Fine Arts in Lodz from 1948 to 1950, he attended the Art Academy in Warsaw from 1950 to 1956. There he was a student of Wladyslaw Strzeminski, who, in his theory of Unism from the 1920s, demanded the absolute objectivity of the work of art, as well as its uniqueness.
In 1965, Opalka decided to describe the time up to the end of his life through painted progression of numbers. He began his initial work in 1965 on black-primed canvas with a size 0 brush with the number 1 in top left. This is followed by the number 2, then 3, 4, 5 and so on, until this 196 x 135 centimeter canvas is completed with the number 35327 in the bottom right as a fragment of an infinte series. The title "Opalka 1965/1–infinity. Detail 1–35327" identifies this first painting as a part or detail of his subsequent work, without defining the end.

This clearly defined work process is supplemented by another, daily recurring action of the artist: in the evening, after completing his work on the respective detail, Roman Opalka takes a self-timer photo in front of the respective painting in the same position and titles it with the last painted number. These photos show the passage of time in the artist's aging process.
In 1972 the artist decided to make the progress of time visible with another element. From then on every new canvas had 1% more white in the primer. The white of the numbers written with the fine brush remains the same. Thus, Roman Opalka accepts the possibility that one day white numbers will be applied to a white background. At the same time, he also records the numbers in Polish during the continuous painting process. The process of creation includes three levels: the painted picture, the spoken number and, as a singular moment, the photo at the end of the working day in front of the resulting detail.
Accompanying our painting "1965/1–infinity. Detail 2702874–2724888" is a book with some of the photographs documenting Opalka's work from 2 million to 3 million and a disc with the original soundtrack. The book is marked as copy 115 of 600. With the number 5607249, which he wrote before his death in 2011, the work he began in 1965 is complete.

With this concept, Roman Opalka sums up the basic questions of human existence: the constant progression of time and the uniqueness of every moment. Today, mindfulness exercises have become almost commonplace and the conscious experience of the moment has gained a foothold in the zeitgeist. In 1965, when belief in progress was not being questioned in the same way as it is today, Roman Opalka was in a special position with his individual decision.
It is by no means the case that Opalka always does the same thing. "The external appearance of his documented time may seem bland and monotonous at first glance, but behind it lies the idea of a \u8203\u8203 consciously lived life, experienced time and thus a life for which we have not had sufficient satisfactory registration possibilities time measurement (date, time). Opalka found a system that enabled him not to lose any time during his artistic work, to experience time consciously." (quoted from: Invitation Galerie Walter Storm, Roman Opalka, September 26 - November 1, 1980) [EH]
More Information
+
Sell
Get a free appraisal for a similar object!
+
Register for
Roman Opalka
+
Buying from A-Z
+
Contact a specialist
+
Roman Opalka Biography
Share