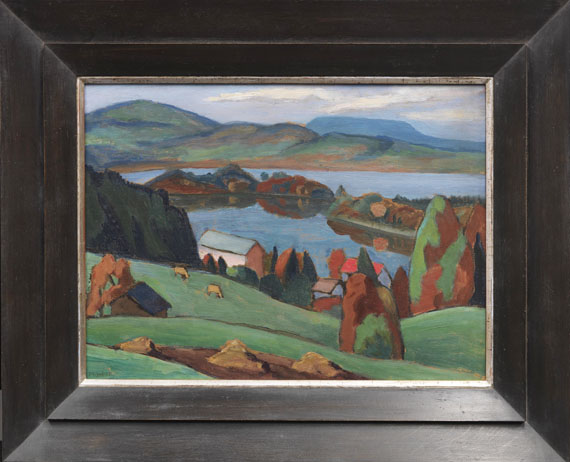 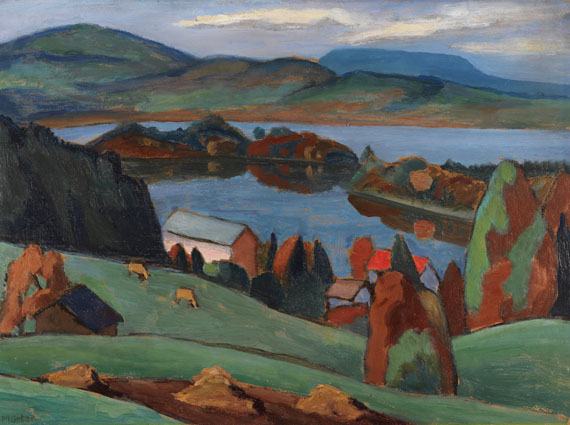 Accompanied by a written expertise issued by the Gabriele Münter-and Johannes Eichner-Foundation on December 1, 2021. The painting will be inlcuded into the catalogue raisonné of Gabriele Münter's paintings.

"In 1908 I found my way of painting with greatest enthusiasm here on Staffelsee in a short, late summer period."
Gabriele Münter, 1948. Memories of the early Murnau period with Wassily Kandinsky and their friends Marianne von Werefkin and Alexej von Jawlensky. Quoted from: Das Kunstwerk, Baden-Baden, 1948, vol. 2, issue 7, p. 25.

On April 1, 1931, Gabriele Münter returned to her Murnau home, which she had left in the autumn of 1914. With the outbreak of World War I, her Russian partner Kandinsky lost his residence permit for Germany and emigrated to Switzerland. Gabriele Münter accompanied him, and when he left Zurich for Moscow later that year, she traveled to Stockholm in July 1915 to meet him in neutral Sweden. It would turn out to be the greatest disappointment in her life. "From 1915 to 1920 I lived in Scandinavia, celebrated great artistic success there, but lost touch with the German art scene. When I returned, I remained a stranger and barely made any efforts to get my feet back on the ground. During my wandering life in boarding house rooms - in Cologne and Berlin, among other places - I did not paint much, but in the decade from 20 to 30 I quietly cultivated drawing in my sketchbook," Gabriele Münter wrote in retrospect after her return to Germany at the end of the 1920s. (Quoted from Annegret Hoberg, Gabriele Münter, Munich 2016, p. 48)

In 1927 Gabriele Münter met the art historian and private scholar Johannes Eichner, which led to another decisive turn, her artistic work regained its former quality, during a several months long stay in Paris and in Southern France in 1930, she finally made oil paintings with sophisticated compositions and in strong colors again. When she returned to Murnau for good in April 1931, she once more entered into a period of great productivity. In her works she revisited the painting and expressionist tradition of the Blauer Reiter from before the war. The subjects resemble those from the time of the Blauer Reiter again: still lifes, portraits, views of the town of Murnau and, as here, of the Staffelsee. With a homogeneous, bold use of color and compact surfaces, Münter paints the motif, animated by a revived spirit and energy, from an elevated position on the Dünaberg above Kohlgruber Street, just a short walk from the artist’s house. From there, the landscape spreads to the northwest, down the slope over green meadows with grazing cows, all the way down to the Staffelsee. What is so special about this angle is that it allows the view of the islands ‘Kleine Birke’ and ‘Große Birke’, as well as the inhabited island Wörth jutting into the picture from the right. The atmospheric colors of the trees in autumn are reflected in the blue of the water. In the background the hilly landscape gently rises behind the lake not far from the village of Uffing.

Once again, the artist conquers the view of the Staffelsee. Not only is this one of her most popular motifs, Staffelsee meant home to Gabriele Münter, to which she returned after so many years of uncertainty. She works out spatial distance from the surfaces with a few contours, and once more makes an impressive achievement in landscape painting with sparing means. The extent to which she appreciated this landscape can also be seen in the fact that she revisited similar motifs as in the present work with only slight alterations. Münter allowed herself to be captivated by the inherent harmony of this fascinating landscape and created it with an artistic attitude of familiarity formed by distance and closeness. [MvL]
More Information
+
Sell
Get a free appraisal for a similar object!
+
Register for
Gabriele Münter
+
Buying from A-Z
+
Contact a specialist
+
Gabriele Münter Biography
Share