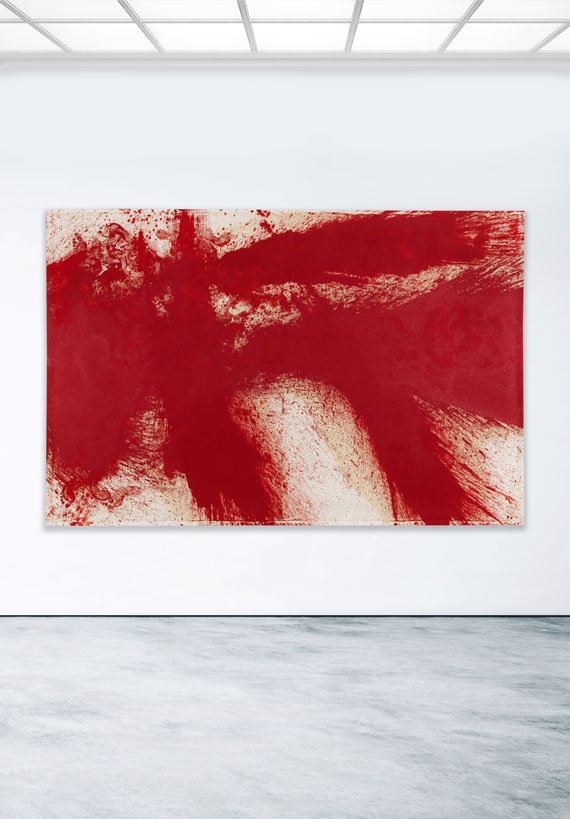 PROVENANCE: Galerie Fred Jahn, Munich.
German private collection (acquired from the above in 1991).

Hermann Nitsch's first painting actions took place at the Technical Museum in Vienna in the early 1960s. As a starting point and at the same time the final product, the expansive "Schüttbilder" (Pour Pictures) document the creative process of his action art and the physical gesture of the painting process, which appeals to all senses. Spread out on the floor or attached to the wall, paint is poured over the canvases, large areas are treated with a broom or the entire body, as the footprints in our work impressively demonstrate. The color red, which is inseparably linked to Hermann Nitsch's work, was the dominant color until the mid 1980s. Only later did the artist expand his color palette to include yellow, violet, black and green. An exhibition at the Albertina in Vienna in 2019 on occasion of the artist's 80th birthday testified to the great variety of his action painting. In an article about the exhibition, the artist said: "Paint is a tremendous phenomenon.(.) In my painting people pour, spray, thick paint is rubbed, smear it, knead it." (Hermann Nitsch, 2019, quoted from: Über die Ausstellung | NITSCH. Räume aus Farbe, online: www.albertina.at/ausstellungen/nitsch-raeume-aus-color). His famous "Schüttbilder" are an expression of this lifelong enthusiasm for the subject and lasting evidence of his meanwhile legendary painting actions.

Our floor painting was created on August 20th, 1986 during the 19th painting event at Prinzendorf Palace in Lower Austria. The baroque complex has not only been the artist's place of residence since 1971, but also the site of numerous performances and events, such as the Orgien-Mysterien-Theater (Orgy Mystery Theater) or the 6-Tage-Spiele (6-Day Games). Hermann Nitsch had conceived his very own new form of art as early as in the mid 1950s. Music, literature and art are to merge into a total work of art that appeals to all senses. His understanding of art was not always met with enthusiasm, especially in the early days. Local authorities arrested the artist several times and he chose to live in Germany, for some time, where the legislation was more favorable for his art. Over the decades the perception of his work changed steadily, and it is now recognized as a groundbreaking contribution to the art of the 1960s. To this day, his total work of art exerts a great fascination on his audience, which he explains as follows: "Mankind wants excess to let off steam, consciously or unconsciously." (Hermann Nitsch, 2014, quoted from: Herlinde Koelbl, Ich bin Wiener und habe getrunken, Zeit Magazin No. 43, October 20, 2011). [AR]
More Information
+
Sell
Get a free appraisal for a similar object!
+
Register for
Hermann Nitsch
+
Buying from A-Z
+
Contact a specialist
+
Hermann Nitsch Biography
Share