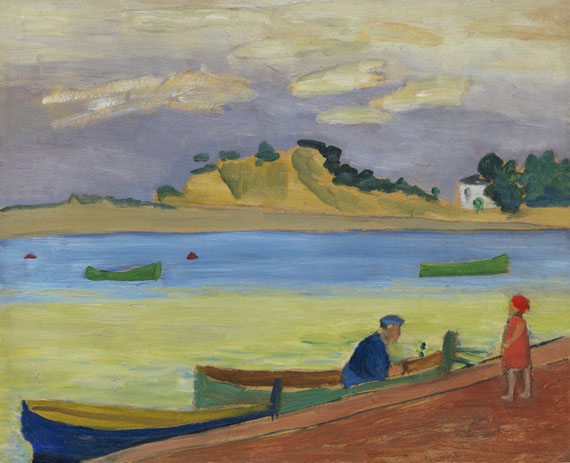 • Some of her most important works were made during Münter's time in Scandinavia.
• For the first time on the international auction market (source: artprice.com).

In Stockholm, Münter met the circle of the Swedish avant-garde around Sigrid Hjertén, who, influenced by Matisse, were experimenting with decorativism in cool colors. During this time she developed a completely new style that was strongly influenced by her Swedish fellow painters. The strong colors and the solid forms of the time of the "Blauer Reiter" now gave way to pastel colors, an almost amorphous form and a deconsolidation of the composition. Important works by Gabriele Münter were created in this environment, among them Narvik Haven, which today is on loan at the National Museum in Oslo from the Sparebankstiftelsen DNB. Far away from Murnau and the alpine landscape, she found a completely different environment and different lighting conditions in Scandinavia. The artist succeeds in capturing this light of the north and the vastness of the landscape in an atmospheric way. Exactly where this scene was created cannot be said, but the proximity to the sea can be felt in the atmospheric depiction. [EH]
More Information
+
Sell
Get a free appraisal for a similar object!
+
Register for
Gabriele Münter
+
Buying from A-Z
+
Contact a specialist
+
Gabriele Münter Biography
Share