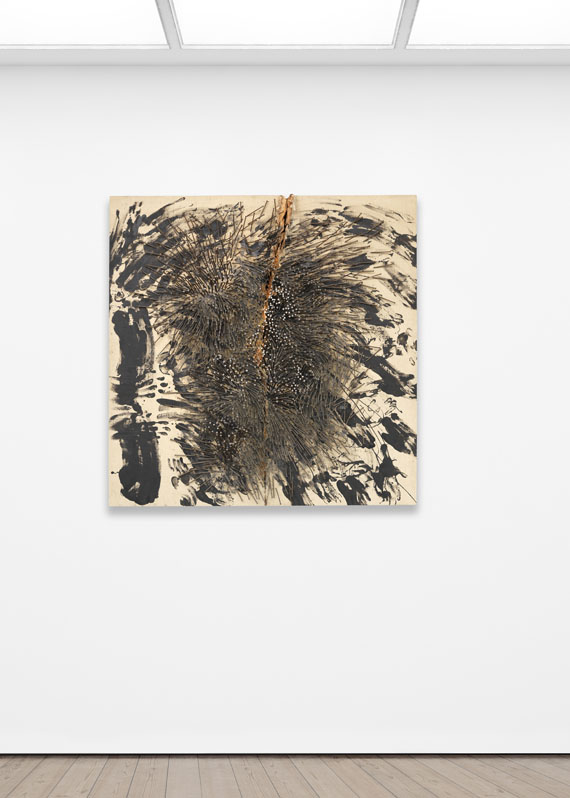 • International artists, among them Uecker, honored Beuys with the exhibition "Beuys zu Ehren" at the Lenbachhaus in Munich in 1986 – planned on occasion of the artist's 65th birthday, Beuys suddenly died and the exhibition became the art world's laudation for an exceptional artist.
• Uecker made "Sturz des künstlerischen Genius“ for the spectacular exhibition – and bows to his fellow artist Joseph Beuys.
• With its ardent gesture and the emotional agitation, the work testifies to Uecker's deeply felt dismay after the death of his fellow painter.
• The deep ax gash is an allegory of parting and loss.
• Perfect format featuring all characteristic elements of expression: painting, nailing and aesthetic destruction.

This work is registered in the Uecker Archiv under the number GU.86.006 and will be noted for inclusion in the forthcoming Uecker Catalogue Raisonné.

Physical painting as a direct connection to the artwork
Günther Uecker is undoubtedly one of the most important German artists of the post-war period and of the present day. The fascination for his work is unbroken, as the current record results at international auctions, as well as the artist's dense exhibition history testify to. Uecker's unique way of creating art has always been shaped by craftsmanship. His physical way of painting connects him directly to the work of art. Kneeling on the studio floor, the canvas is spread out flat in front of him. He paints directly with his hands covered in black paint, and his whole upper body is in motion. He thus enters into a direct dialog with the material. Painting is always the first step in creating his nail art. Once the canvas has been applied to a panel, the next powerful act follows. In the present work, Uecker also treated the panel with an ax. Then Uecker drove the carpenter's nails into the wood in strenuous physical labor. The next nail always answers its predecessor, the direction they will take is not predetermined. A mystical power seems to bring the nails into their undulating order, seems to direct their inclination. The result is a work of art of almost brute energy and emotional turmoil. The work was created under the impressions of the time - in 1986 the world was shocked by the nuclear accident in Chernobyl. Uecker was also deeply affected by the event. His works from the 1980s became socio-political and emotional, they deal with the endangerment of man and nature through man. This led him to create a series of works revolving around the theme of “Verletzungen“ (Injuries). In an act of violence, Uecker deconstructs the perfection and flawlessness of his earlier nail works and also injured the picture’s body by forcing it open. The nails become a protective entitiy by enclosing the injuries. In "Sturz des künstlerischen Genius", the wound is particularly deep, penetrating the body of the picture like a gaping wound. The deep split, the finger painting with black paint and the gestural nailing are stylistic features of a small group of works made in 1986. Günther Uecker chose "Sturz des künstlerischen Genius" for the exhibition in honor of Joseph Beuys, to which he was invited along with other well-known international artists.

An homage to Joseph Beuys
In late 1985, the Lenbachhaus in Munich planned an exhibition on the occasion of Joseph Beuys' 65th birthday on May 12, 1986. Joseph Beuys was engaged in its conception and it was important to him that artists involved had already played an important role in the art world of the past ten years and that they came from places where his works had been exhibited or where he had carried out actions or installations, so that the artists had an opportunity to familiarize themselves with aspects of Joseph Beuys' œuvre. The exhibition had already been fully planned and was scheduled to open on July 16, 1986 (fig.), when Joseph Beuys unexpectedly died in Düsseldorf on January 23, 1986. Many acclaimed national and international artists such as Georg Baselitz, Jörg Immendorff, Markus Lüpertz, Gerhard Richter, Blinky Palermo, Lucio Fontana, Per Kirkeby, Richard Serra, Cy Twombly and Andy Warhol participated, to name but a few. In total some 70 artists made contributions from their oeuvre to the exhibition. Günther Uecker also participated in the show and made the present "Sturz des künstlerischen Genius (für Joseph Beuys)" (Fall of the Artistic Genius (for Joseph Beuys)).
The relationship between Uecker and Beuys was certainly ambivalent. They had been friends since the late 1950s and also exchanged works, but the relationship was also characterized by a certain competition. The two pursued the similar artistic goal to make the world a better place through art. Uecker and Beuys were artistic companions for many years. Uecker wrote an obituary for Joseph Beuys, which was released both in the 1986 Lenbachhaus exhibition catalog and in the magazine "Zeit" on January 31, 1986. It testifies to Uecker's appreciation of his fellow artist: "It always was your goal to make art the basis for ideas that unite people. You have reawakened people's aspirations for autonomy, which had their revolutionary origins in the past century. Art as a spiritual flow of energy. This concept of art has gained attention around the world and has become a creative movement."
Joseph Beuys – A work that brings people together
Joseph Beuys, the shaman from Düsseldorf, saw himself as a guiding shepherd. He was one of the most important artists of the post-war period and remains a guide for many generations of artists after him. He was perhaps the only renowned post-war artist who not only believed in the deeply humanistic utopia of a better life for all, but also constantly strove to transcend art, which, in a social context, was completely isolated, in order to bring about concrete political, social, ecological and economic changes. Beuys propagandized the idea of “Every man is an artist”. Humans are creative beings if they can free themselves from the dominance of reason. Günther Uecker's contribution "Sturz des künstlerischen Genius" (The Fall of the Artistic Genius) to the exhibition "Beuys zu Ehren” (In Honor of Beuys) was unmistakably clear in its reference to Beuys. Like no other artist, Beuys stood for dualistic thinking, which is at the heart of his entire creation, whether in sculptures, drawings or his actions. Chaos and order, animal and human, rationality and emotionality, matter and the ethereal. He was concerned with and fought for overcoming this supposed separation. Opposite poles should be connected. Uecker's work also tells of the connection between two broken fragments, it stands for injury and healing. The choice of black also characterizes Beuys, it is symbolically linked to his work. His sculptures, black panels, black crosses and objects are imbued with alchemical thinking. In "Sturz des künstlerischen Genius (für Joseph Beuys)“, Uecker obviously takes a bow to his fellow artist colleague. Beuys wanted to be – and in fact is – the fallen genius of a generation. The exhibition contributed to the manifestation of the legend of Joseph Beuys, in which a new order was also negotiated. The most important international artist contributed their most radical works to the exhibition. [SM]
More Information
+
Sell
Get a free appraisal for a similar object!
+
Register for
Günther Uecker
+
Buying from A-Z
+
Contact a specialist
+
Günther Uecker Biography
Share